Working with off-track horses is both challenging and rewarding. Although each horse is unique, here are six commonalities that can be found in off-track Thoroughbreds and off-track Standardbreds.

I have been working predominantly with retired racehorses for the past several years. Many of my students own retired racehorses and I have had many come through my barn over the years. One thing that I often get asked is some variation of, “What’s the difference between training a Standardbred and training a Thoroughbred?”

When asked this question the words “a rose by any other name would smell as sweet” from Shakespeare’s Romeo and Juliet often waft into my brain. Because most of the time I find that there are more commonalities between the two breeds than differences. So, this article will focus on six of the commonalities that I have found to be true of training retired racehorses.

Now before I go any further, I would like to add the caveat that all horses are different. Some horses will not fit into these neat categories. I know that. I actually specialize in horses with unusual behaviors, so I am versed in seeing horses as individuals and not as breeds. But, for the purposes of this article, I am going to talk about trends I have seen in many of the off-track horses I have worked with over the years.

Also, for the purposes of this article, I am only focusing on Standardbreds that have come directly from racing, so, although I have worked with several horses that have been with the Amish as an intermediary career, I am going to focus on the ones I have worked with that are coming directly off the track to make the comparison cleaner. 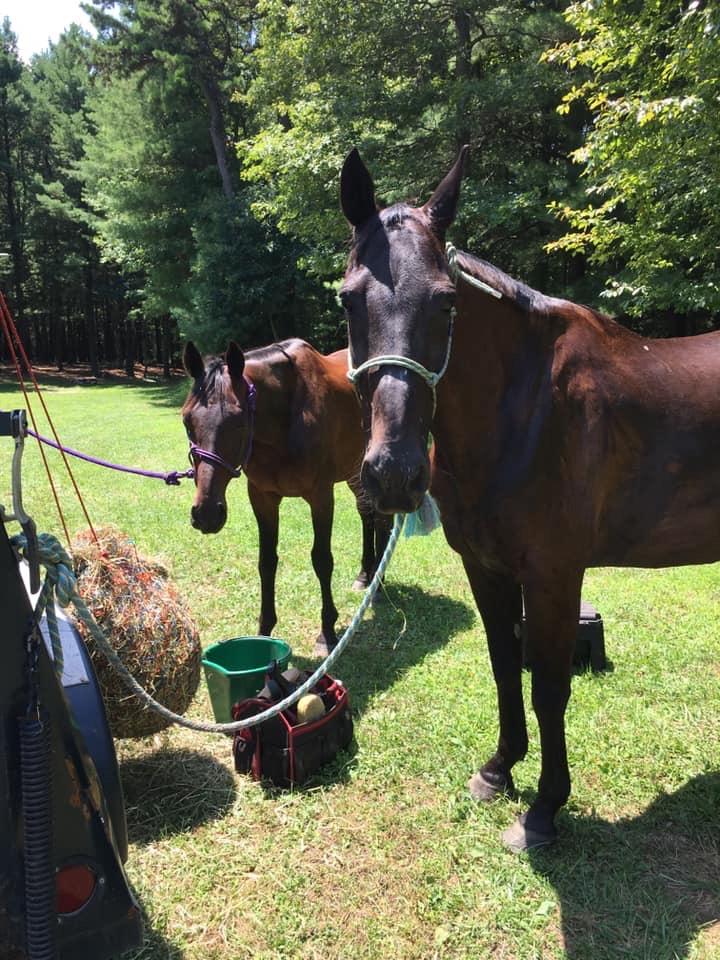 I also get asked all the time if I have a favorite type of ex-racehorse and I do not. I love working with both Standardbreds and Thoroughbreds equally.  For me most of the horses I have worked with from both breeds have excellent brains and are wonderfully athletic. I love the versatility of both breeds and the fact that you can find either breed in English or Western tack. Both breeds make phenomenal horses for beginners or professionals.

I’ve also had Quarter Horses and Appendix ex-racehorses in my barn and enjoyed working with them, but I have had contact with far fewer of them than Standardbreds and Thoroughbreds. And I have yet to have an Arabian ex-racer in my barn (somebody send me one!). So, for the purposes of this article, I have chosen to focus on the two breeds of ex-racehorse that I have had the most experience with: Standardbreds and Thoroughbreds.

Without further ado, here are the six things I’ve found that off-track Standardbreds and Thoroughbreds have in common:

Thing One: Body Transition Time: With both Thoroughbreds and Standardbreds coming directly off the track, there is a period of time where their muscles must shift. They go from being long, lean and race fit to getting ribby and often having some sort of skin gunk that causes their coat to get kind of patchy.

Their hooves also often go through a transition as they go from having their feet done before a race and living in a stall to living in a pasture and seeing the farrier far more infrequently. These transitions are normal for both breeds. And especially with war horses, the horse will often undergo a total body transformation and go through kind of an upside down muscled, thin stage before blossoming into a lovely sport horse. 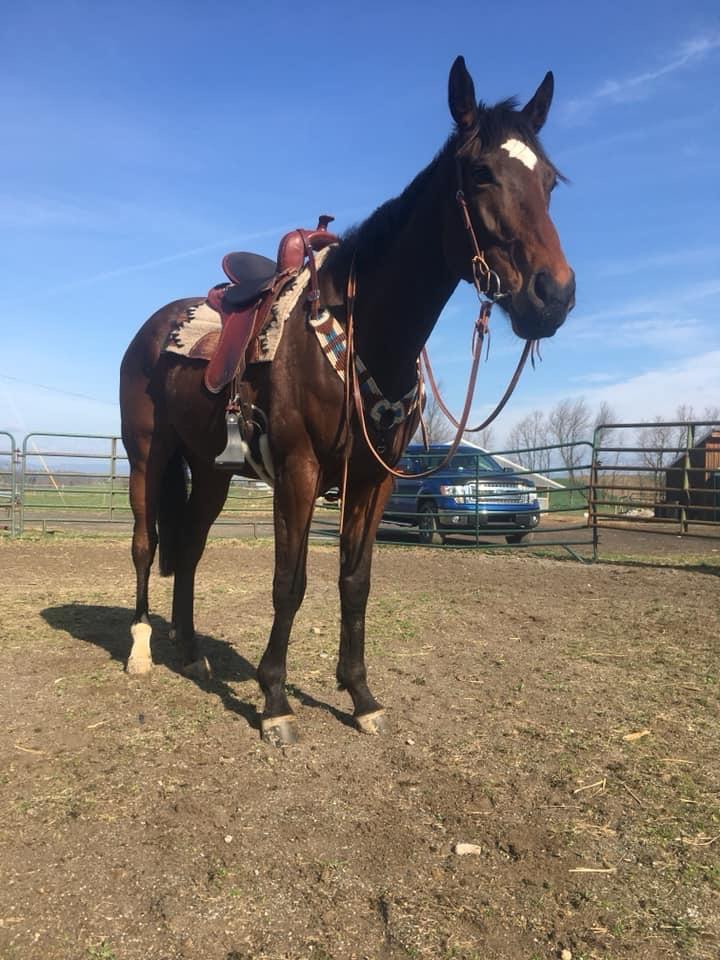 Razzy’s Reward in the early days off the track, working in the round pen. Photo by Ashley Francese 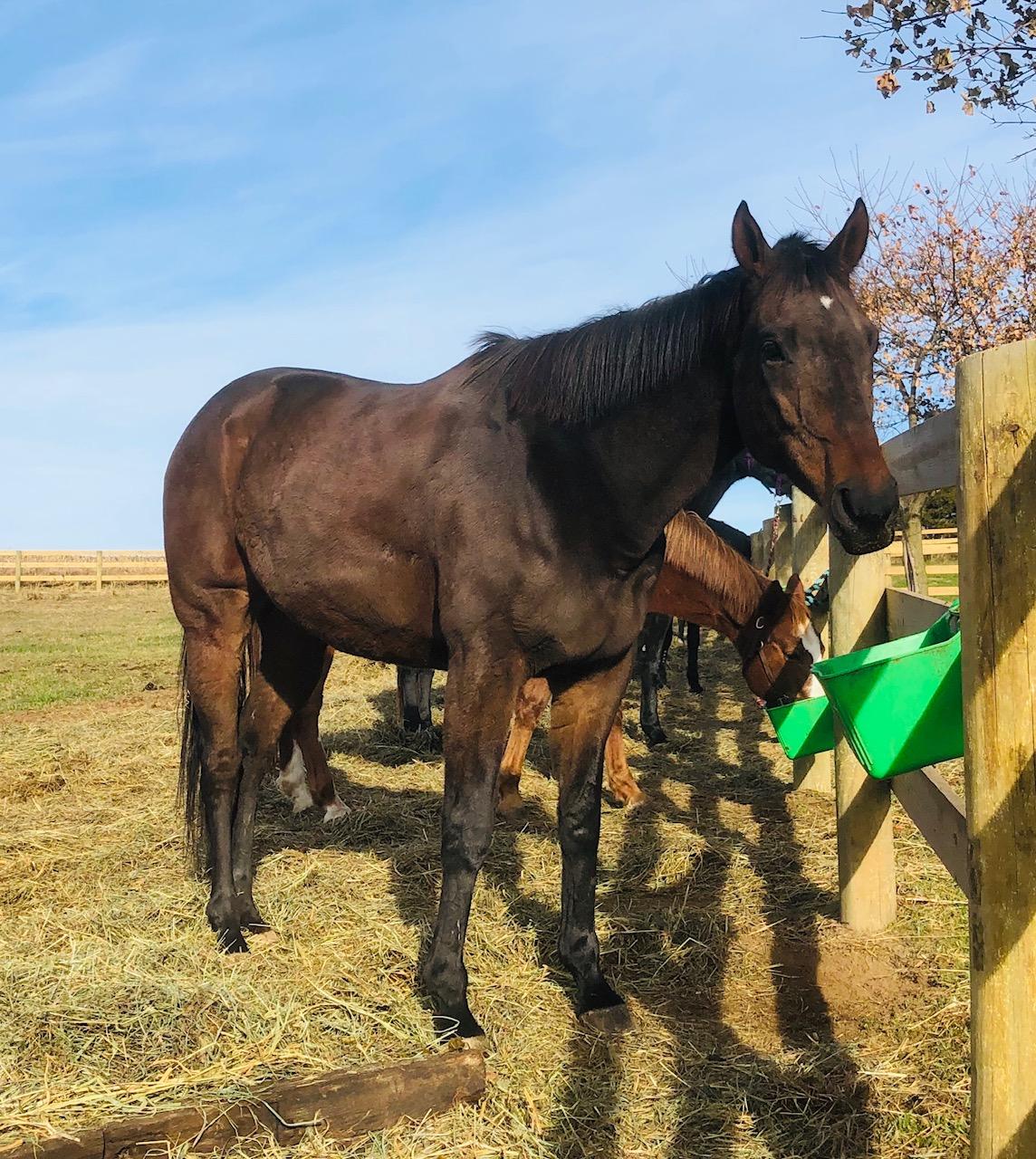 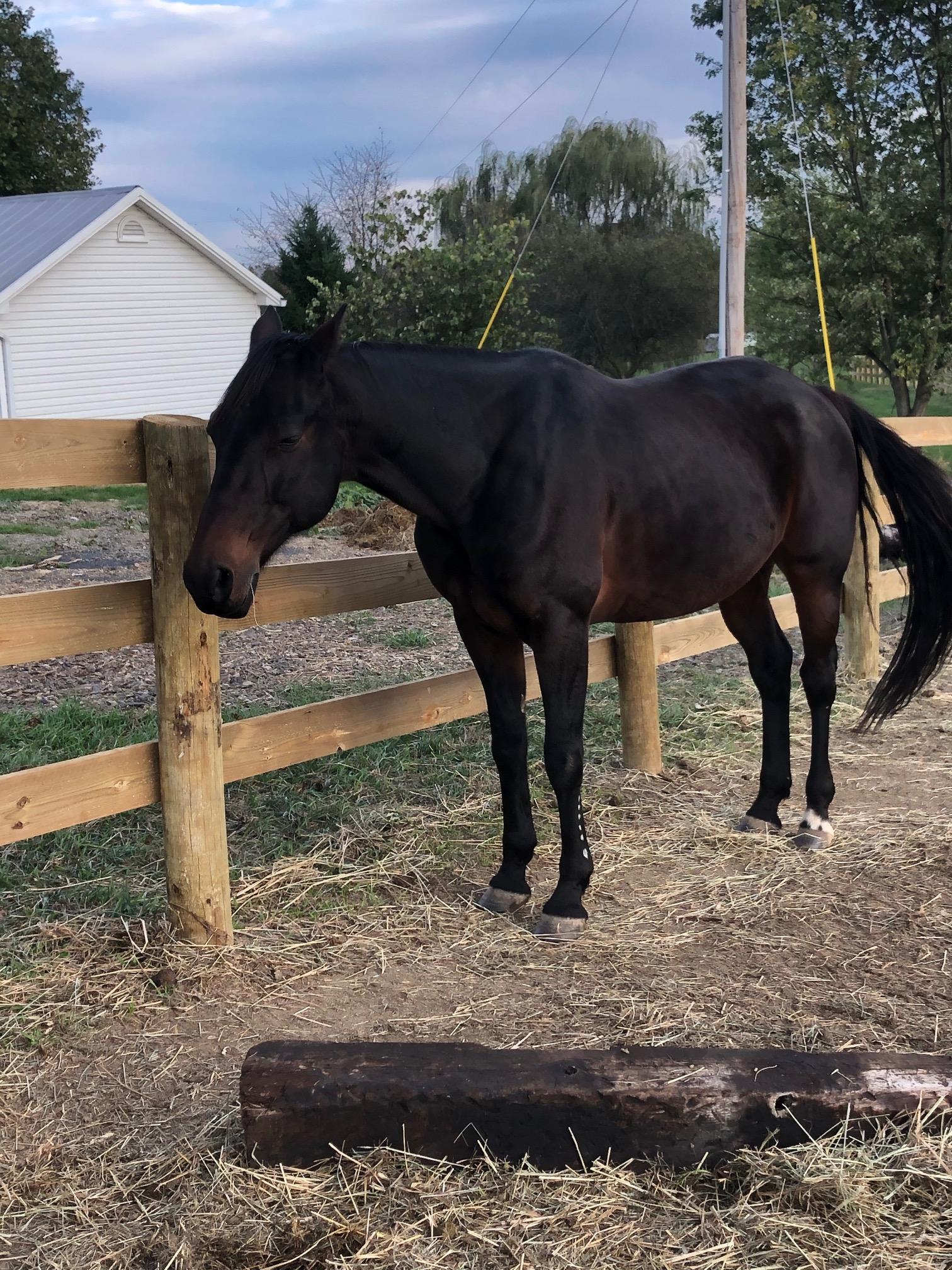 Thing Two: Mounting: Both of these breeds have already been in work and have already had one career, and the expectations that we have for them in their new career are very different than their previous set of expectations. As a result, owners of transitioning horses need to show some patience as the horse is catching on to what we want. This is most solidly evinced by mounting. Standardbred racehorses don’t get ridden as a rule, so when you put pressure on their backs, they will often start to yield to the pressure as if they were feeling rein pressure through a harness.

Thoroughbreds often have their jockeys thrown up onto them, so moving after mounting is normal and standing is abnormal. Both of these breeds can learn to stand for mounting very well, but for both Standardbreds and Thoroughbreds mounting can initially be a bit of a struggle.

Thing Three: Reliance on the Bit:When working with both Standardbreds and Thoroughbreds that have just come off the track, I find that both breeds often come to me with bit issues. Thoroughbreds tend to want to fidget with the bit, and/or ride with their head up in the air, and/or seduce you into holding onto their mouths. Standardbreds are the same. They fidget with the bit and they want to pull against your hands due to having been driven.

With both breeds, I have the best luck relaxing my elbows, softening my hands, and putting my leg on. Because that’s another thing both ex-racers have in common. They seduce you into thinking they are going fast and going to run off with you by putting their heads up and arching their backs, but what they are actually doing is lurking just behind your leg, so that they can pull with the front legs rather than pushing off from behind. 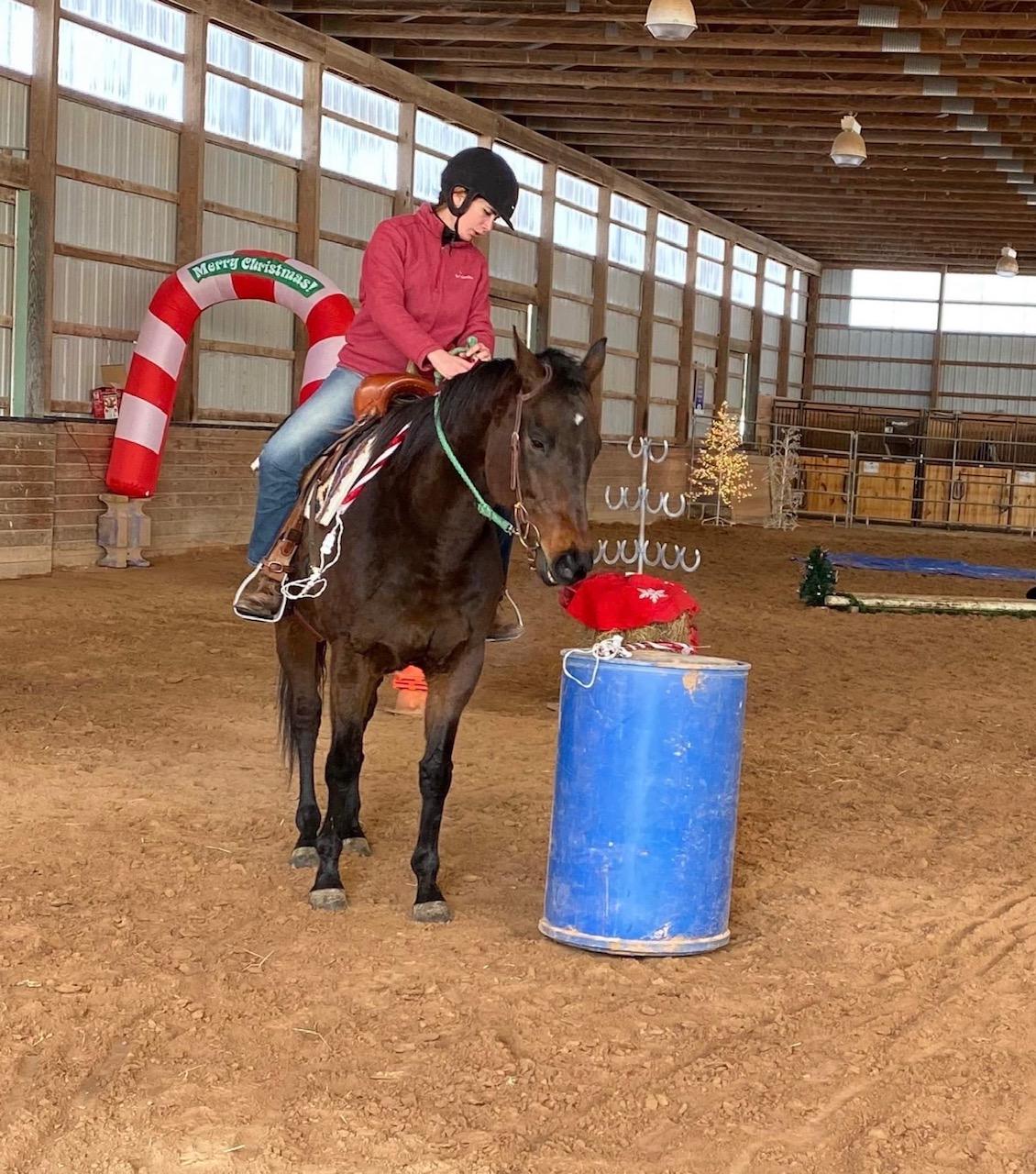 Thing Four: The Magic of the First Ride: There is nothing — and I mean nothing — in the world so magical as putting a first post-track ride on a racehorse. Everything is possible in those first few moments when you put your foot in the stirrup. I will never forget the very first post-track ride I put on a retired racehorse. It was in December of 2015 and just as I slid into the saddle, the sky erupted in the most breathtaking array of flurries.

It was hands down the most beautiful moment of my life (I’m sure it helps that I don’t remember my wedding day due to a concussion), but that moment of riding my first racehorse in the snow will always stick with me. It’s given me a sense of whimsy associated with first rides and a love of snow that rivals Lorelai Gilmore’s. That sense of magic from that first ride still strikes me every time I ride a new off-track horse. Whether it’s one that’s already had someone in the tack like a Thoroughbred, or one that wonders where his cart is and why a human is on his back like a Standardbred. 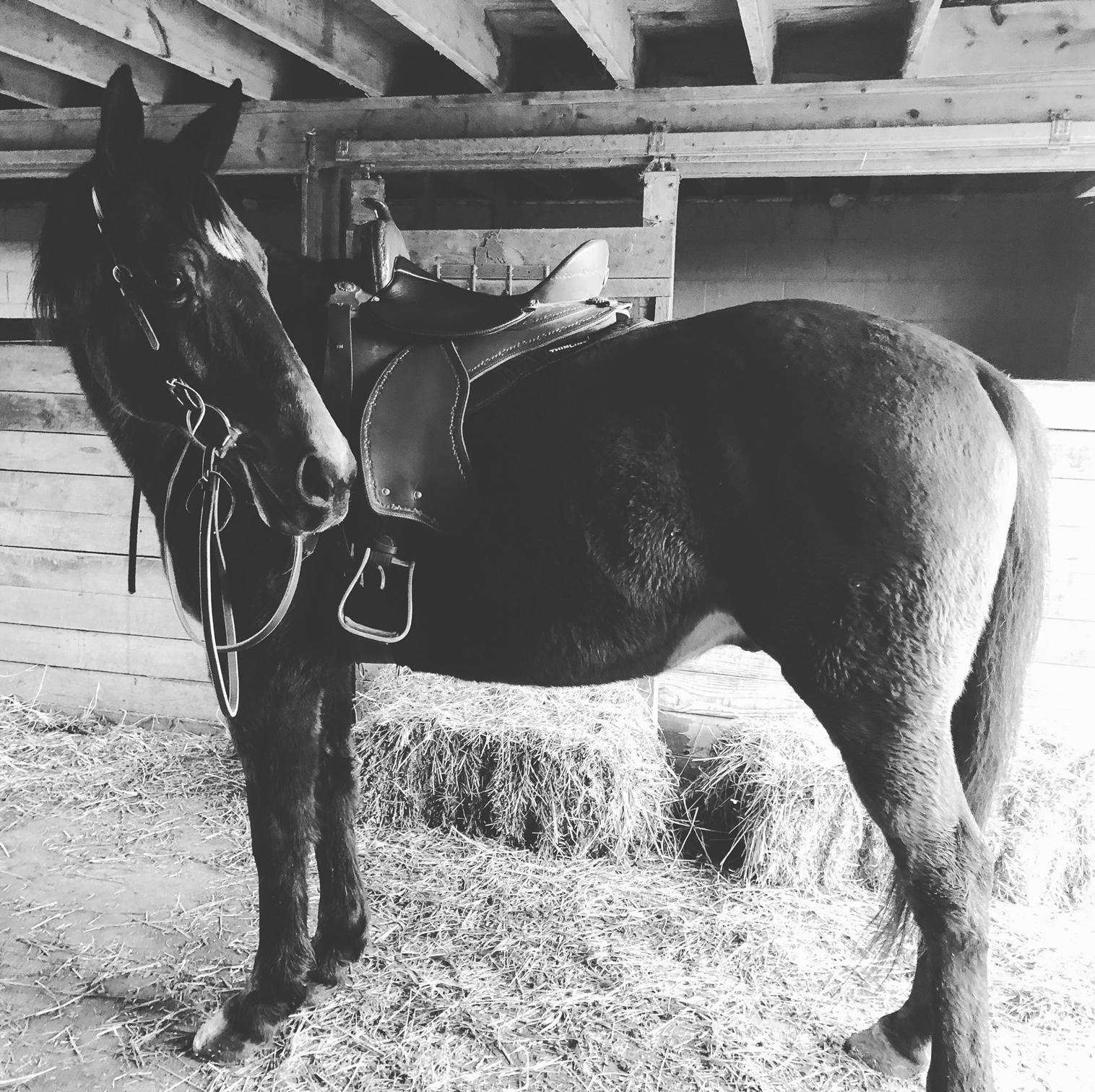 Thing Five: Backing Up: Both Standardbreds and Thoroughbreds often struggle when first learning to back up. With the Thoroughbreds this is usually related to the horse wanting to push forward into your hand and move forward. White Christmas is one of my favorite movies of all time, and in it Mary Wickes’ character Emma Allen says, “Not like Horse Harry. Advance! Advance! Never Retreat!” That line, although used to apply to General Waverly in the movie, applies well to Thoroughbred racehorses. Going forward comes naturally to them. But going backwards, that takes a little bit of time and finesse.

Standardbreds likewise struggle with the back, because they too like to “Advance! Advance!” and because of the fact that they get worried about their cart. The first couple of backs, they’ll look at you as if to say, “but the cart…” The same thing happens when you walk a Standardbred through rocks or over poles for the first time. They’ll freeze and be like, “but what about the cart?” They too, just like Thoroughbreds, will often brace against the bridle and resist with their hind feet when first being asked to back.

Thing Six: Work Ethic: The work ethic of a racehorse can’t be beat. It doesn’t matter what you want to do with them from riding lessons to trail rides to herding cows, these horses are down to work. Ex-racehorses love to have a job to do and a purpose. And when they have that purpose, they make lovely and bold riding partners. I start most of my horses in an enclosed space but by the end of the first ride, we’re out of the arena and out in the real world. I take my horses out on the trail from day one and the vast majority of my ex-racehorses take to trail riding like a duck to water. Most of my riding happens when I am alone and my off-track horses quickly get good at hacking out solo.  For brains and bravery there is nothing like an ex-racehorse. 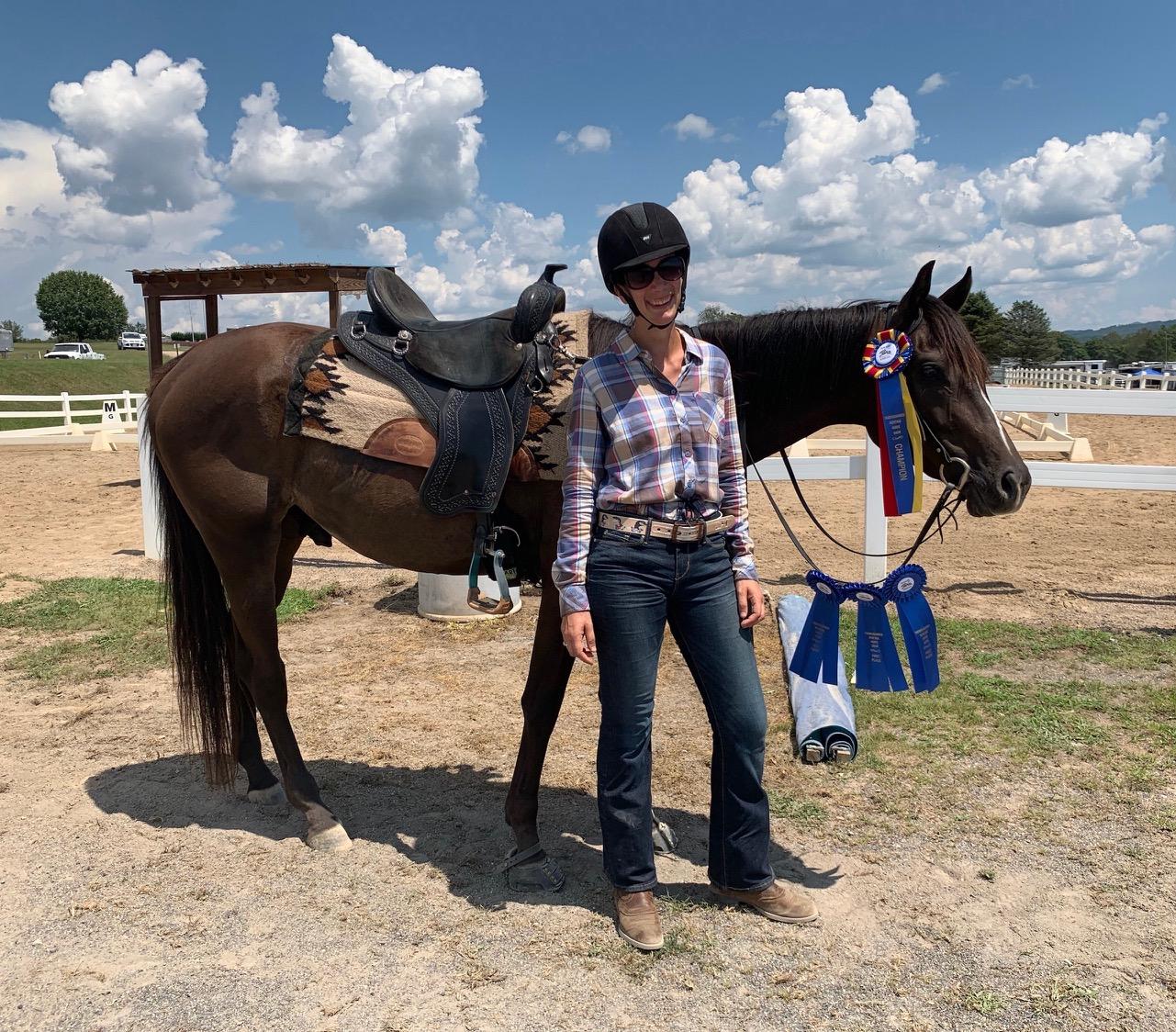 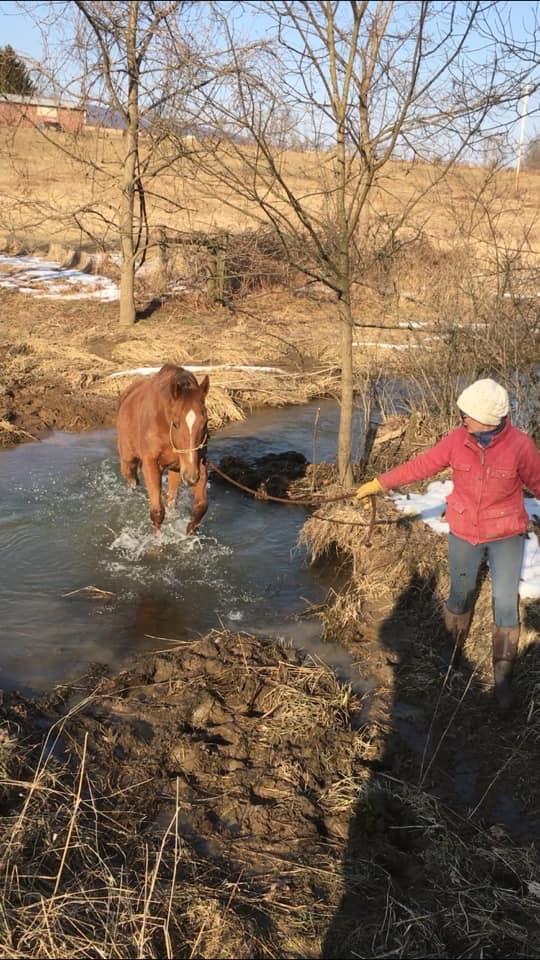 Hiking with Swipernoswiping to teach him about water. Photo by Ashley Francese 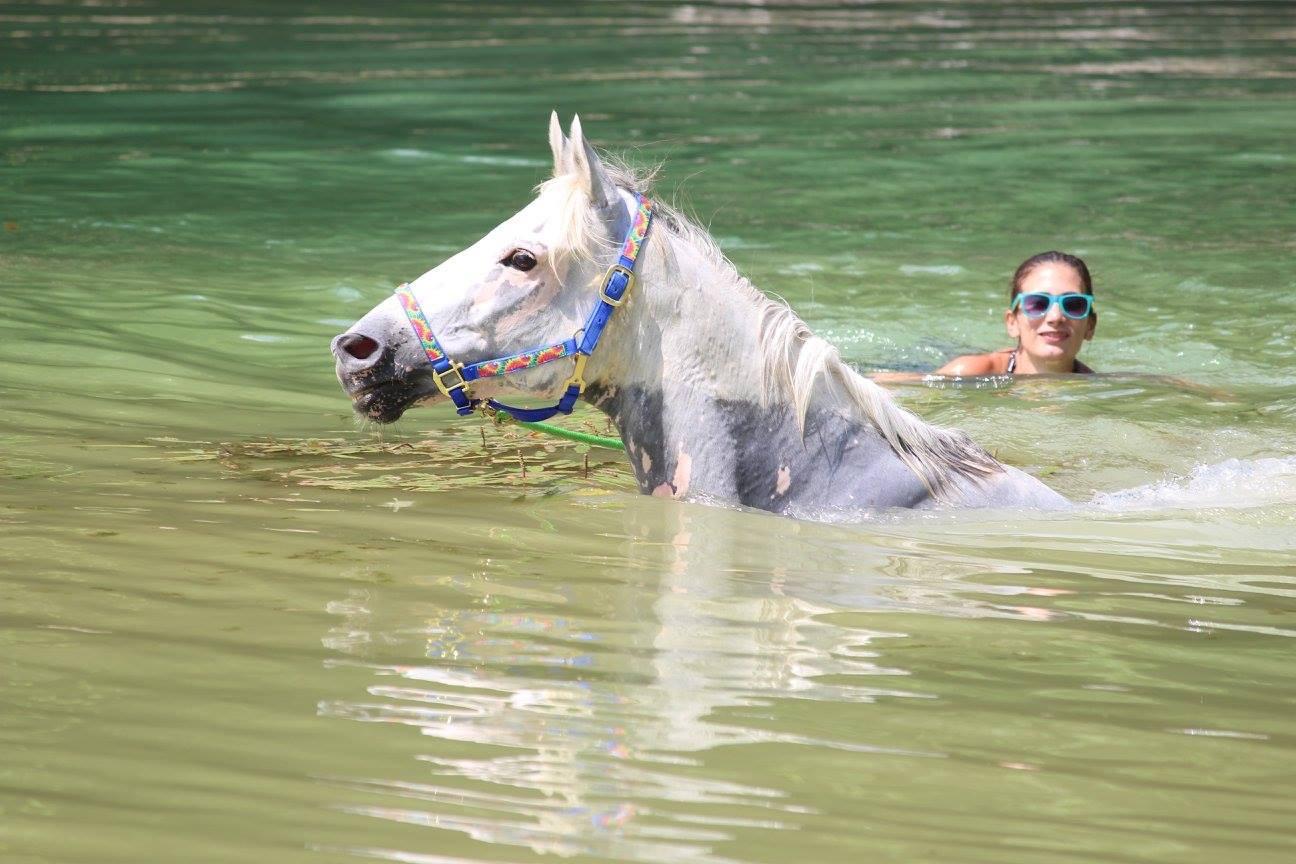 Swimming with Tapesprit for the first time. Photo by Ashley Francese