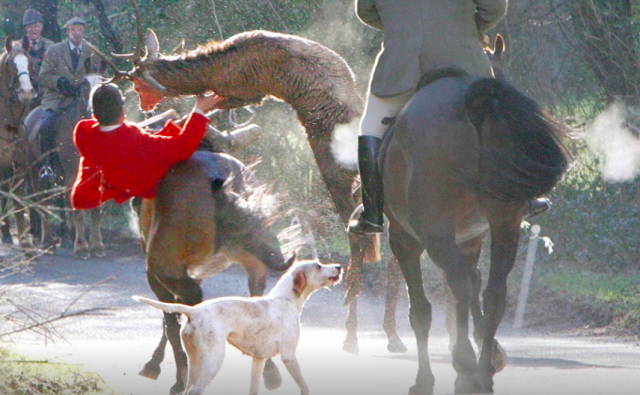 Monday is already the crappiest day of the week and every week we make it official by bringing you an “Oh Crap” moment. Now it’s time for you to choose which of these is the top “Oh Crap” of 2019.

This is bound to be a fun one — because, of course, no one got hurt and everyone’s laughing, generally speaking. What’s the ultimate Oh Crap Moment of the Year?

Two things in this video are proving themselves absolutely, 100%, hands-down, no-holds-barred reliable in a totally ridiculous situation:

1. This champion of a bay horse

I think the words “total chaos” are fairly fitting to describe what’s going on in the background/foreground/middleground of this video while Imogen Murray attempts to ride a quiet, harmonious test (which, by the way, she deserves about 6 billion bonus points on, am I right?) Watch this all the way to the end — there’s a reason the whole video is over two minutes long.

Pros: this mare is clearly an athlete.

From reader Rachael Mikelson: “My mare Anna… trying to video her fancy trot, instead got her reaction to another horse that was cantering by.”

Oh Crap Monday, submitted by @rachaeljean11: “Myself (Rachael Mikelson) and my mare Anna. Trying to video her fancy trot, instead got her reaction to another horse that had cantered by. My nephew Liam was videoing.”

Bridleless riding takes a secure seat, extreme riding ability and proficient overall horsemanship. It takes even more to ride bridleless when the situation gets a little squirrelly. This week’s “oh crap” moment showcases a bridleless ride gone wrong and made all the more entertaining by the other horse and rider, who seem to be enjoying their friend’s unforeseen excursion. Although, who doesn’t like a good laugh with (or at) their friends?

Jumping bridleless off property after a day off… not a good plan 😂. Milo got to have a full schooling session after this even though it was supposed to be an easy hack. #milestone4se #fail #thoroughbredsofinstagram #warmbloodsofinstagram

The start of this video is lovely. The horse is moving out nicely and has decent scope over the first fence … and then the second jump comes along. Watching that part of the video was enough to make my heart drop to my stomach as I gasped, “Oh crap!”

I’m not sure about you, but I have a hard time finding turnout boots that will stay on my horse. Whether the boots are pull-on or velcro, my horse is Harry Houdini when it comes to getting them off. She’s also pretty creative about how she wears them. I’ve seen them flipped upside down well above her fetlock — she’s come in wearing them (or not) in about every way possible. Or so I thought.

This horse managed to do … well, this. All we can do is look at the picture, scratch our heads and think, “Oh, crap.”

One of the best things about riding horses is how spending time in the saddle allows us to escape our troubles. Until trouble decides to body slam us when we’re least expecting it. And trouble might actually come in the form of a fairly large buck.

Ask your vet about BoneWiseTM. 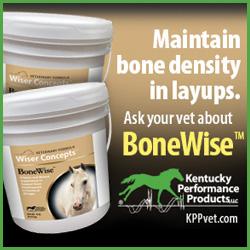