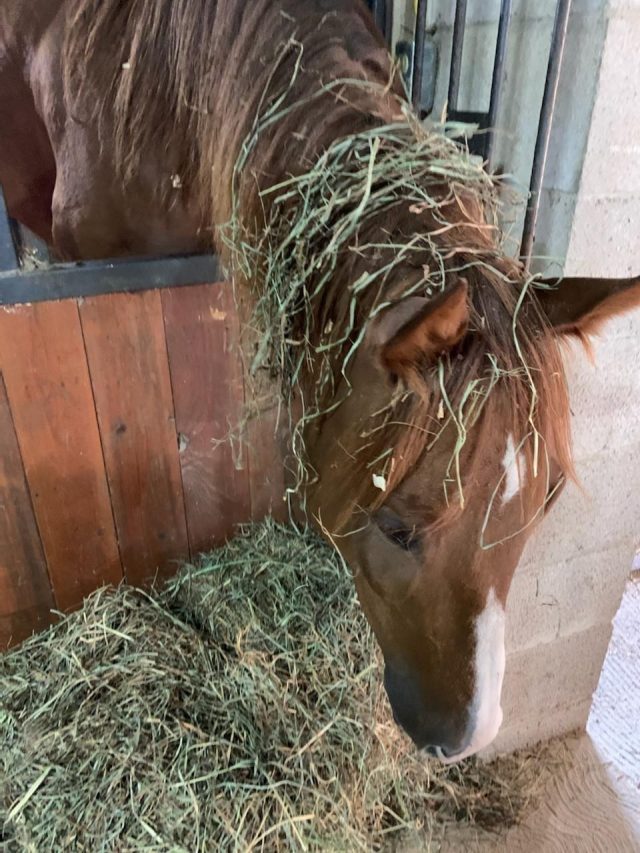 “One week of stress and pain was all it took for Buns to lose a significant amount of weight and it’s been over two months of battling the issue to get him back to optimal weight.”

On his journey to recovery I, along with In Stable Hands, have faced many challenges and educational topics that I would like to share. We’ve faced and discussed proud flesh, the fracture and the tendon damage. The next issue we’ve been combating is maintaining a healthy weight.

In most cases, when a horse is on stall rest, he tends to gain weight because of the decrease in activity and the feed amount staying the same. This has not been the case for Buns. The first week of Buns injury, he lost weight at a drastic rate. He was in pain and had a change of scenery as he stayed at the clinic for a week. He went from a healthy, stout horse to a thin frail one.

One week of stress and pain was all it took for Buns to lose a significant amount of weight and it’s been over two months of battling the issue to get him back to optimal weight. 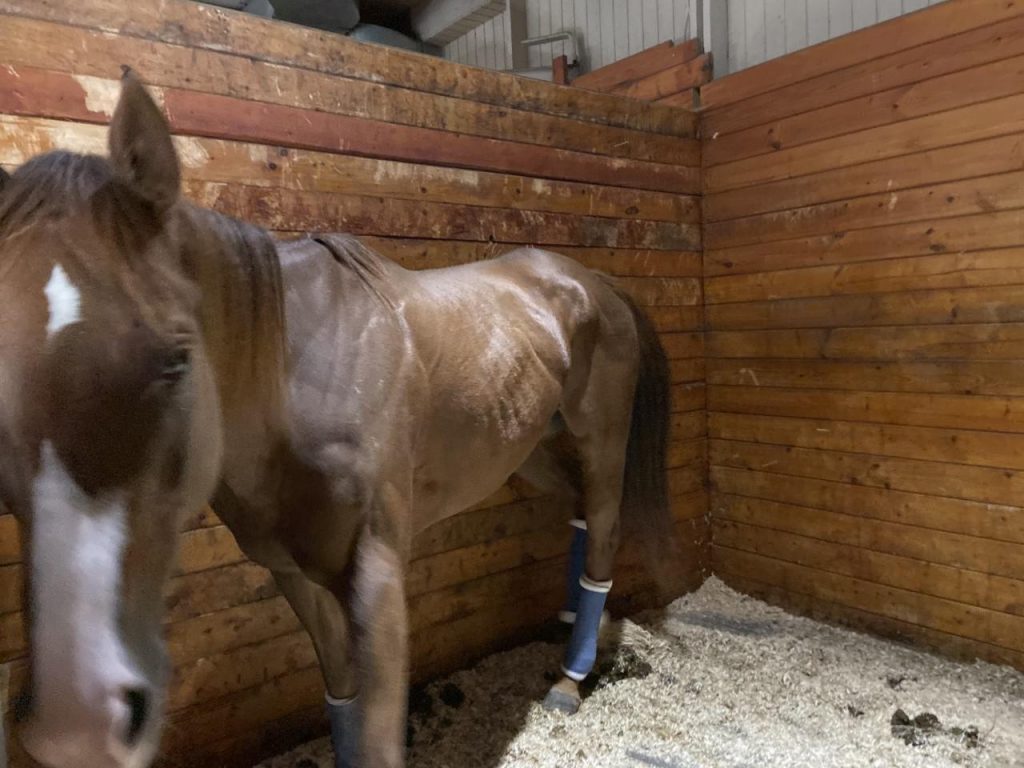 Usually Buns gets 4.5 quart (a scoop and a half) of Tribute Senior Sport twice a day, free choice first cut round bales in the pasture and second cut flakes while in his stall, but since his injury his diet has been altered to tailor to his caloric needs.

Because Buns is on strict stall rest and does not get turned out, he does not get the free choice round bales. We have adjusted the amount of hay he gets in his stall to be free choice. In Stable Hands does an amazing job checking his hay rack periodically throughout the day to make sure he always has some to munch on. 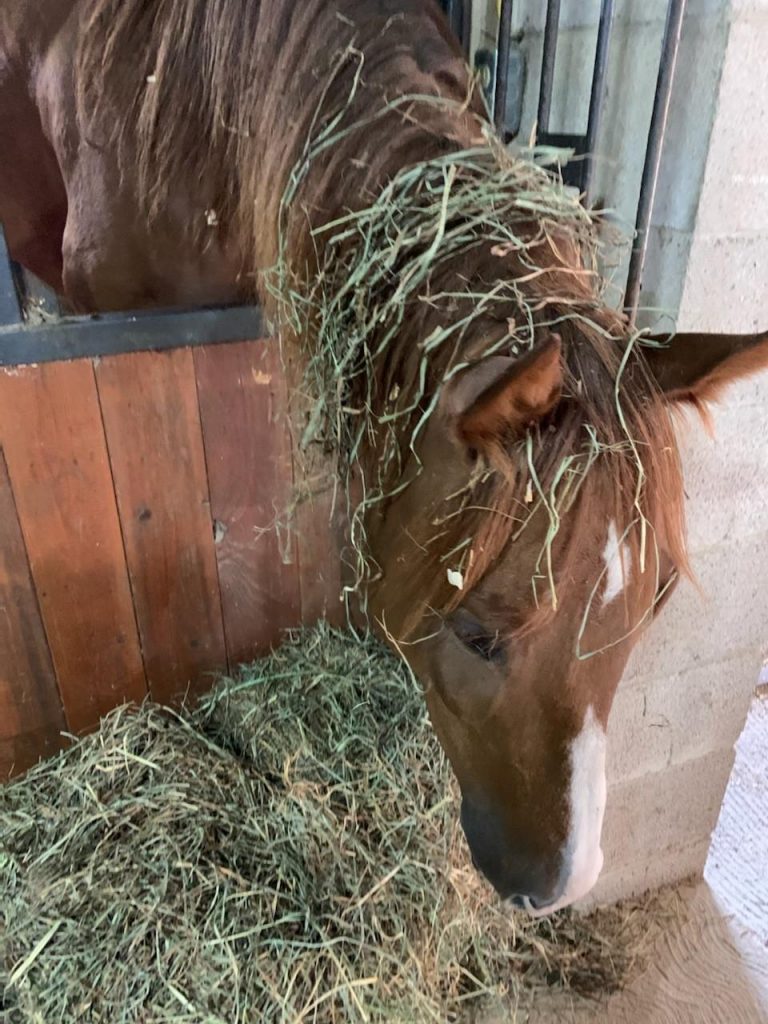 With the guidance of our veterinarian, we have collaborated and agreed on a diet that will increase Buns’ caloric intake and help improve his weight within a safe time frame. I cannot take credit for the hard work that goes into feeding time and the ever changing diet. In Stable Hands has really taken on this beast and has done an amazing job thus far.

Buns is now receiving double what he receives when he’s healthy and out on pasture. While pacing in his stall, his grain intake has been increased to nine quarts (three scoops) of Tribute Senior Sport twice a day.

Tribute Senior Sport is an awesome feed that has a high fat percentage, high fiber percentage and has a scientifically based mixture of amino acids, minerals and antioxidants to aid in optimal performance. This feed may also be used to replace hay when the horse is unable to chew or digest it.

If Buns weren’t injured, the diet would end at the increased grain as he’s a fairly easy keeper, but it’s really been a struggle to get him back to his optimal weight. With that being said, we brought in some dietary reinforcements.

The first product we have been using as a supplement is rice bran. Rice bran serves as a good source of fat because the fat is highly digestible. This supplement aids in adding calories to Buns’ meals without adding more grain. Aside from adding calories to Buns diet, rice bran is also known to help in managing gastric issues. When a horse’s routine changes, developing ulcers is a common side effect that also results in weight loss.

Vegetable oil is the other supplement we have been adding to Buns’ feed. This option is inexpensive and has 120 calories in every table spoon! Buns gets one cup twice a day, adding 3,840 calories to his daily diet! There’s no high end-brand that needs to be purchased. The Walmart brand vegetable oil works just fine. The oil is poured right on top of Buns’ feed and gives the feed more texture. 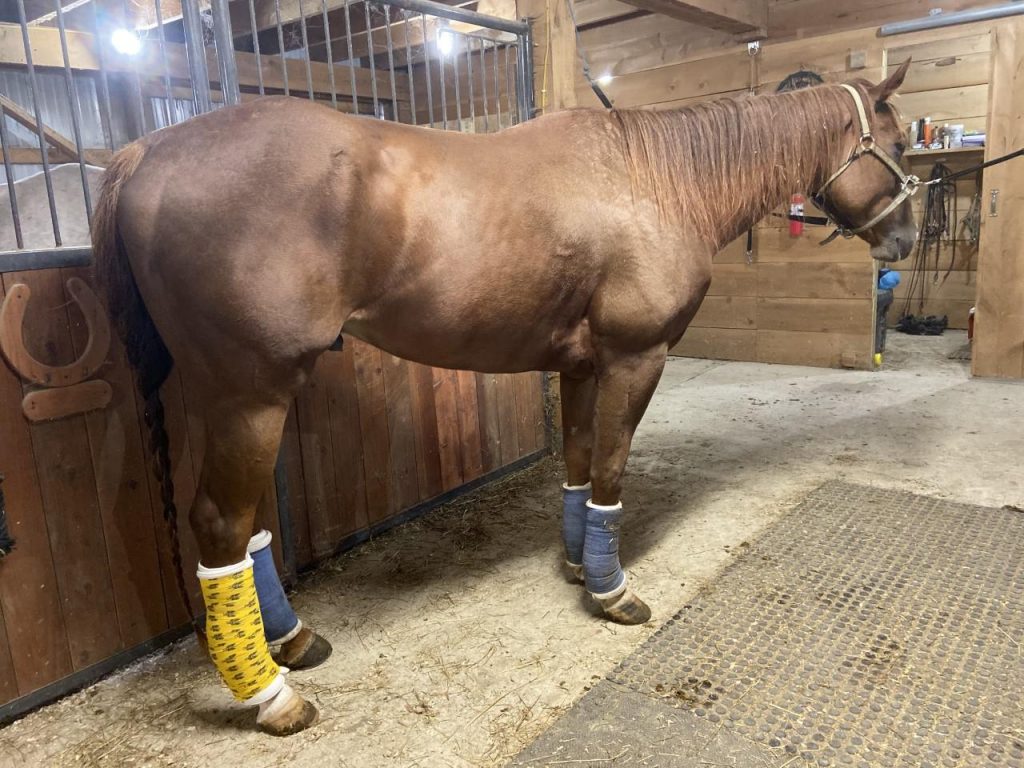 Utilizing increased Tribute Senior Sport, good quality free choice hay, rice bran and vegetable oil has ultimately increased Buns’ weight. While he is on stall rest, we will continue to closely monitor his weight gain/loss and In Stable Hands will continue adjusting his feeding regiment to meet his weight needs. Our main goal is for Buns to maintain a healthy weight so that we can keep our main focus on the care on his leg injury.