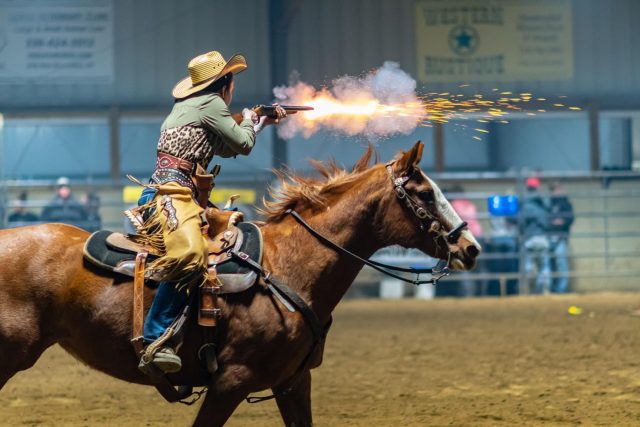 Shelby’s “willingness to do anything I ever asked of her was her gift to me for the compassion I showed her by letting her be a horse and by appreciating her for what she was.” 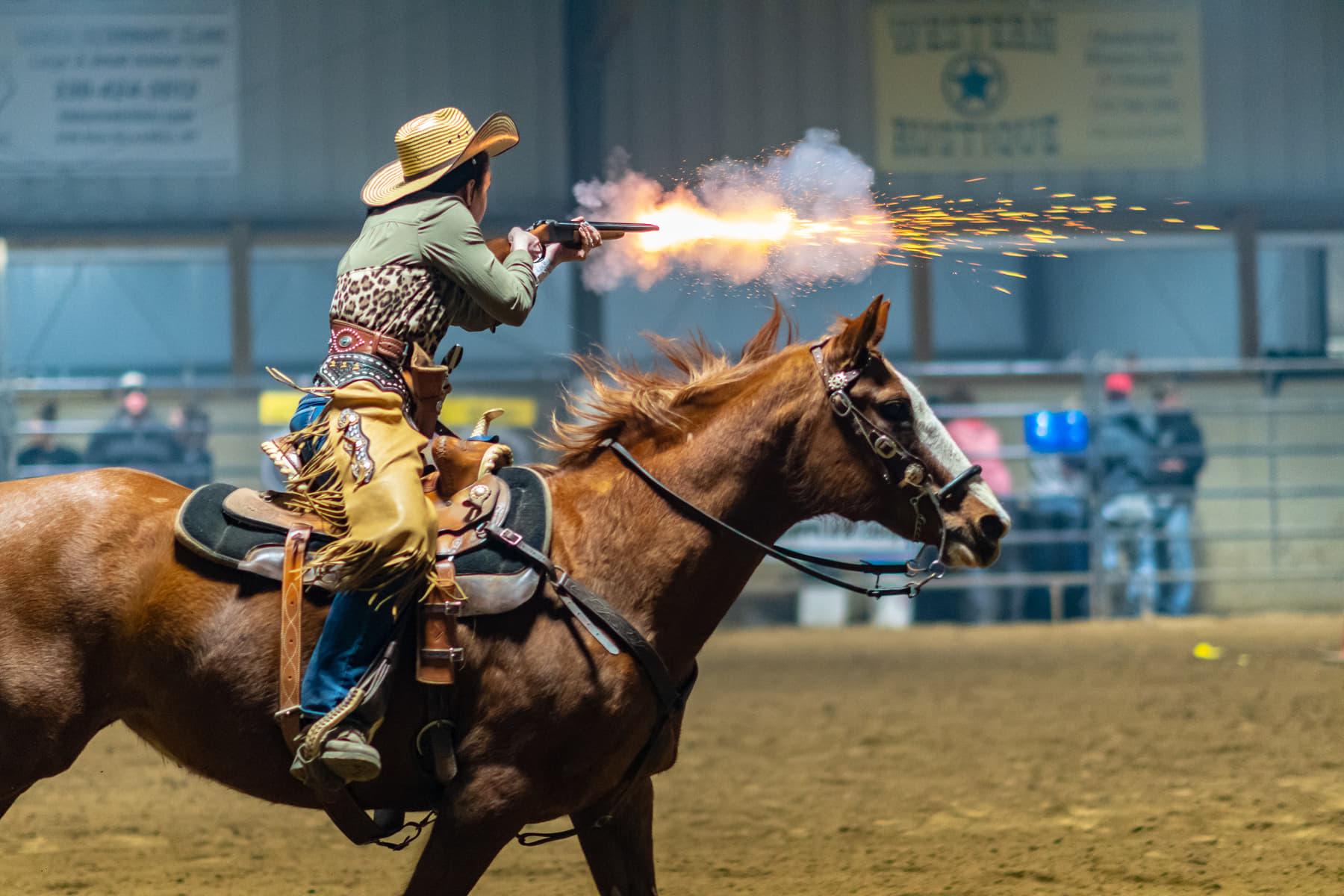 When we decide to find ourselves an equine partner, our hope is that we will find the right match. We hope we find a horse whose personality is compatible with our own and that they will enjoy our chosen disciplines just as much as we do.

As buyers, there are numerous avenues we can choose to go down to find our dream horse. If we want something ready to go win on, we buy something from a trainer that is tried and true. If we want more of a challenge, we can buy a horse that is a little green that may need to be finished out.

Or maybe our desire is to start with a blank slate, so we opt to purchase a weanling from a breeder.

We can be as selective and as particular as we want when finding our diamonds in the rough. We can request entire histories and learn of every injury, knowing that we chose the unicorn that passed all our tests and checked all our boxes gives us peace of mind.

Then there are people like me who get an itch for adventure. We crave the thrill of rolling the dice, so we decide to rescue a horse. Rescuing is a wild card. The horses that end up at the auction houses come in all shapes and sizes, with limited information on what lead them on the path to the sale.

That is okay with us though. We jump into rescuing knowing it’s the luck of the draw. We accept we will have some polishing to do. Repurposing horses and giving them second chances is what we feel we were put on this earth to do.

But what happens when the adrenaline rush wears off from our impulsive acquisition and we find ourselves biting off more than we can chew?

Most know Shelby as the horse who does anything for me. They know her as the mounted shooting horse who doesn’t bat an eye at the sparks from the gunpowder, the boom of the gunshot or the popping of the balloons. 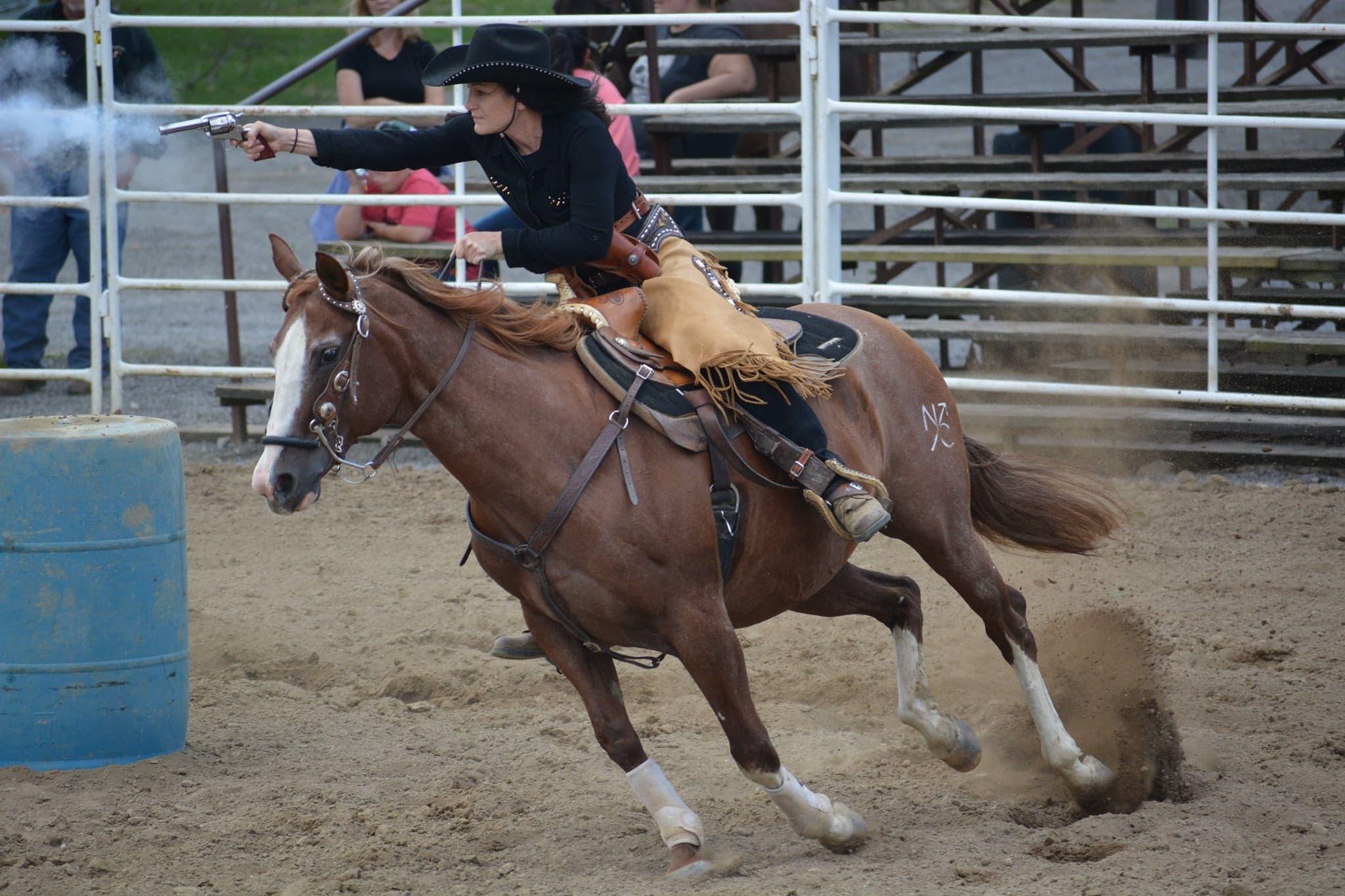 But only some people know the whole story of Shelby.

Nine years ago, a little sorrel mare on Facebook caught my eye. She was waiting in a kill pen for a second chance at life. If she wasn’t bailed out soon, she would be getting sent to the slaughterhouse to make room for more auction purchases from the kill buyer. 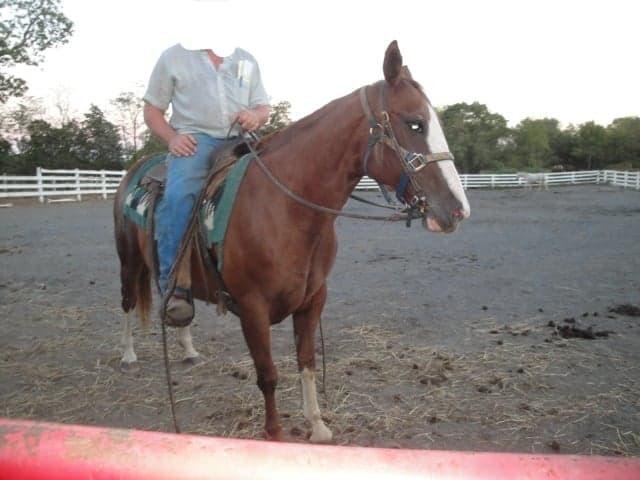 She came through the auction with a note stating she was a 1D barrel horse named Go Go Girl. I thought she would be a good fit for me, and if I didn’t get along with her, she would be easy enough to refresh and resell.

With the help of a friend, I made the trip to go pick her up from the very crowded quarantine barn. As we pulled up, a little sorrel mare with a large white blaze came prancing out to the edge of her tiny pen and stared us down, as if she knew we were there for her. Even as we walked around getting a tour, she did not take her eyes off us.

She would change positions in her pen to give herself the best view and impatiently sent out a few nickers our way, telling us to hurry up. When it was time to load up, she leaped onto the trailer before I could even bend down to get her legs wrapped for the trip. She knew this was the end to the long few weeks she sat at the feedlot and I knew there was something different about this mare. 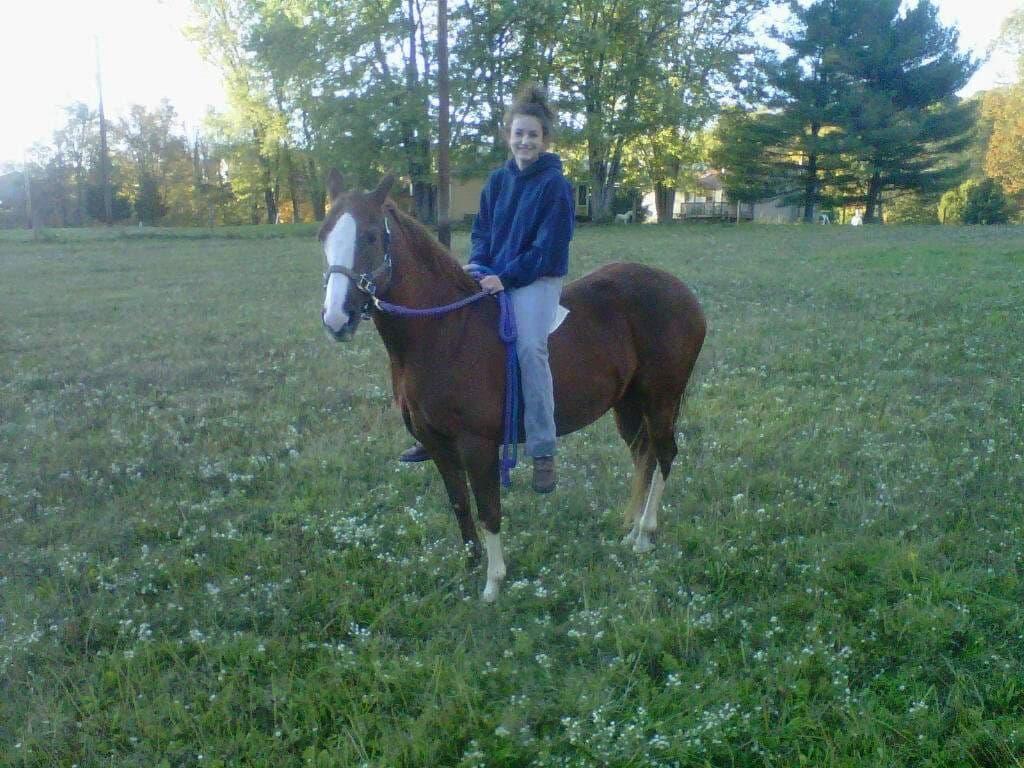 My husband and I cleaned her up later that day and in just a halter and lead, I took her for a spin in the field. The sashaying and forward momentum she exhibited made it obvious why her name was Go Go Girl. However, I was not fond of the name and couldn’t bring myself to call her that.

In an effort to persuade my husband to be a little less mad at me for getting a second horse, I let him pick a new name for her. We tossed around names that were in reference to Mustang cars, something he likes, and eventually the little mare became known as Shelby. 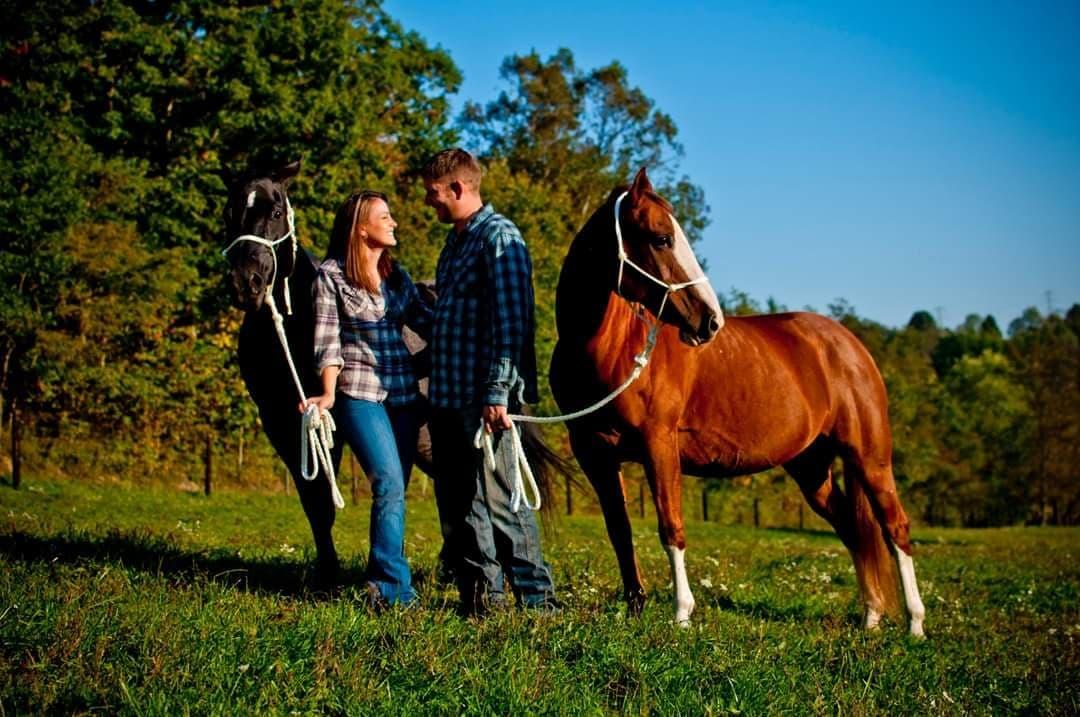 Photo by One Way Street Productions

Over the next few days, Shelby’s baggage started to arrive. It began with setting back when tied. I had never dealt with a horse doing that and, even though it was unnerving, it would prove mild in comparison to the events that followed.

The day of our first real ride started out normal enough. She had excellent manners and stood quietly as I groomed her and started tacking her up. I threw on the saddle pad and then the saddle, but as I moved to start bridling her, something in her face changed.

Her eyes got large, she took a deep breath, went straight up in the air and flipped over backwards onto the saddle. Once she got herself back up, she just stood there looking at me contently.

With my mouth gaping open in shock, we just stared at each other for what seemed like an eternity. She was sizing me up and I was wondering what the hell I just got myself into.

The only way to get on her was to do it as she was moving because she would not stand still. I managed to get on her in motion and discovered she only had two speeds — trot and gallop. There was no standing still, no walk and no canter.

I referred to our early trail rides as “death rides” as there were no brakes and the only way to stop her was to get her sideways and let her bumper herself into a tree.

To say the next few months of figuring out this mare were hard would be an understatement. In addition to her major issue of flipping herself over when being tacked, she was the textbook blown up barrel horse — all go and no whoa. It was becoming clear that all her previous owners ever asked of her was to run. I could tell she had training, but there were significant gaps.

Curiosity got the best of me and I tried to dig up as much information about her past as I could, hoping that if I knew more it would help me fix her. I really did not have much to go off besides the name she had when I got her. I tried many versions of her name in the AQHA and APHA registries and no horses matched her description.

I spent hours upon hours searching the internet for clues, then finally I had a breakthrough on one of the barrel racing organization websites. Results from a few races with her former name enabled me to track down the name of one of her previous owners. But the only thing talking to these people did was solidify my intuition that she was ran hard and handled roughly.

Their advice to me was to keep her head tied down, use spurs, use a stop and turn hackamore and show her who is boss.

I was angry. Not at her, but at the people who did this to her. I knew she was not born this way and this behavior was a product of human error. She had to have been very mistreated in the past if she was willing to flip herself over to avoid being ridden, and now I knew that is exactly what her past entailed.

She was so extremely sensitive to reading a human’s intention that she seemed to almost have a panic attack at the very idea of being saddled. I don’t know how many times I called friends in tears right after she would have another flipping episode. 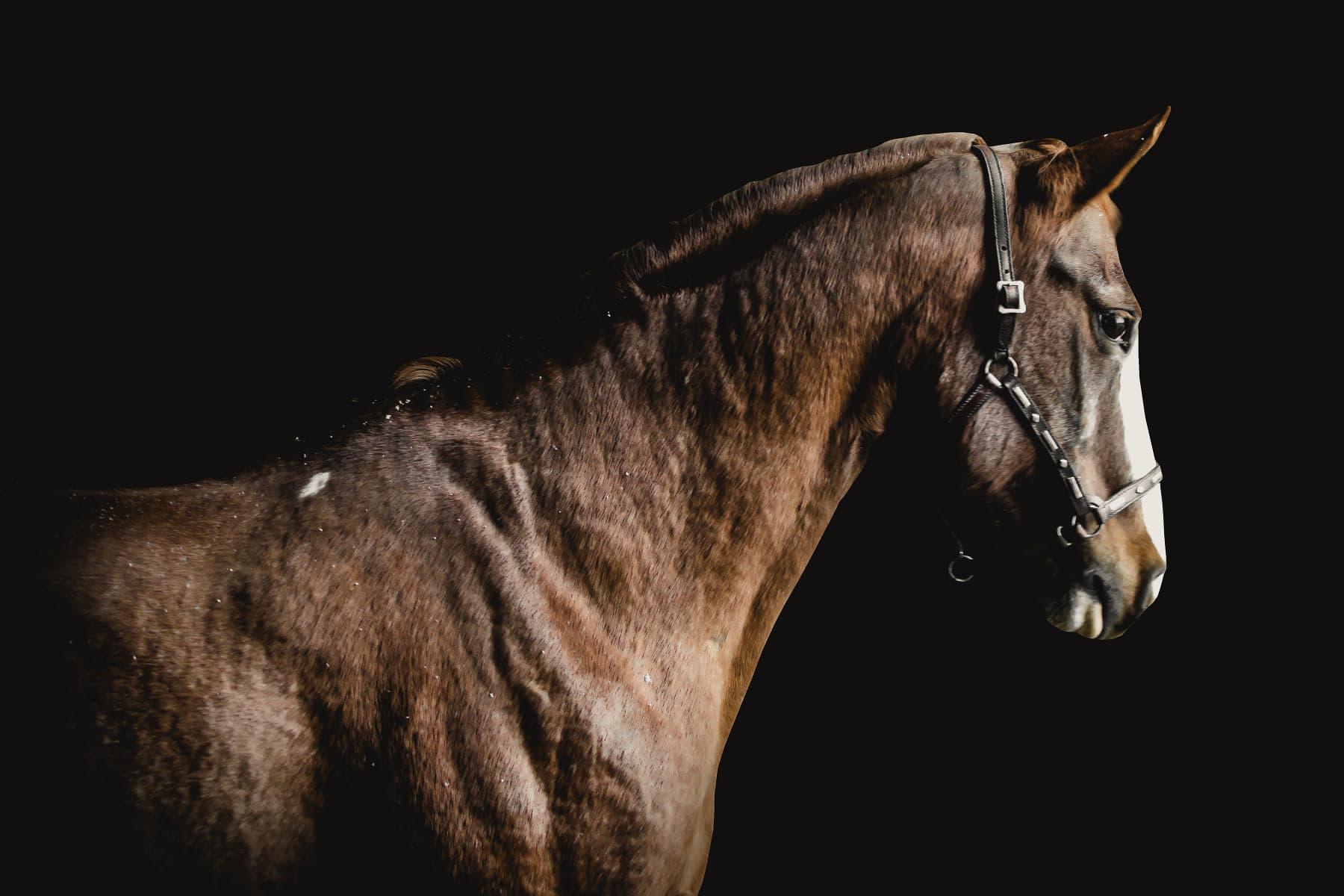 Figuring out her triggers took time. The biggest set off was cinching her up too fast. I developed a routine out in the field, where on a lunge line I would saddle her, slowly tighten it up, move her, tighten it up more, move her, etc. This seemed to really help, but there was no overnight fix.

Out in the field she would not flip over like she would if she was tied, but she would back up fast and fall over.

The saddle spots near her withers indicated to me she had been ridden in equipment that did not fit her correctly and rubbed her so raw that the hair grew back white. Another piece to the puzzle.

I spent a lot of time letting her mind decompress. Our early sessions mostly consisted of just saddling her and calling it a day to show her I was not going to hurt her by ripping on her face, spurring her to run or riding her in equipment that was painful. It took about a good year and a half until thinking about flipping was no longer the norm.

Over the years, our bond grew stronger and her walls began coming down. She proved to be one of the bravest horses I have ever sat on. Her willingness to do anything I ever asked of her was her gift to me for the compassion I showed her by letting her be a horse and by appreciating her for what she was. 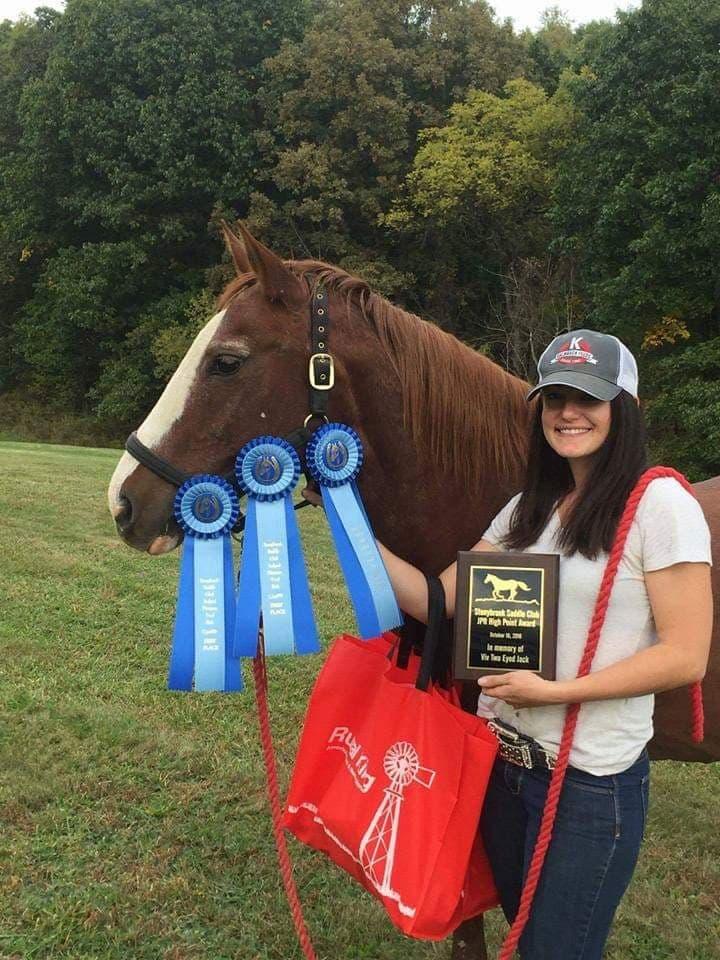 Although Shelby and my riding career ended earlier than expected due to EPM, she forever has a place with me. She has taught me more over the years than any other horse. Through our journey together, her idiosyncrasies have been overshadowed by her greatness.

That is the risk we take when we rescue horses. We don’t know their histories and we can only hope they don’t come with more baggage than we can handle. But sometimes, the greatest risks end up returning the greatest rewards. 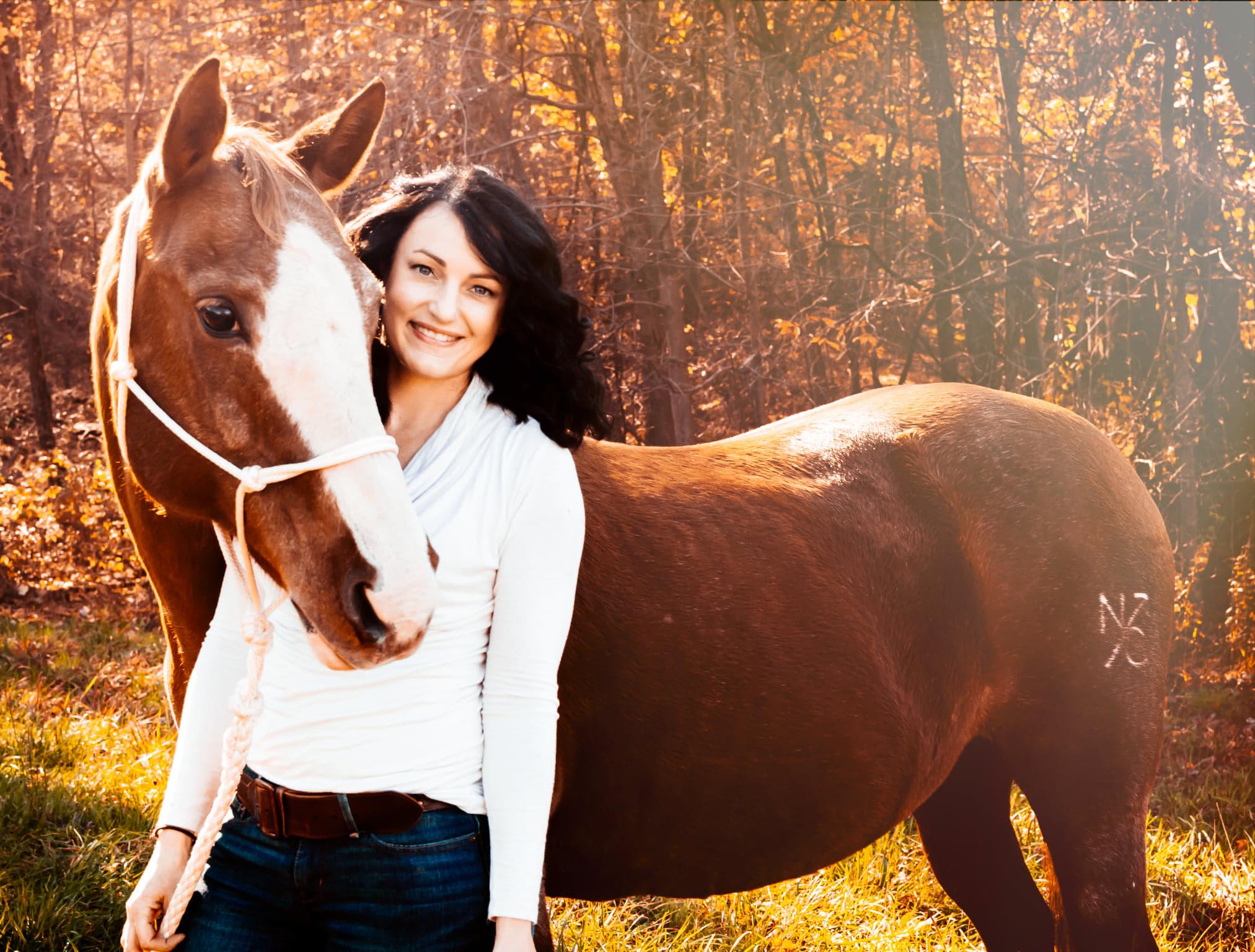