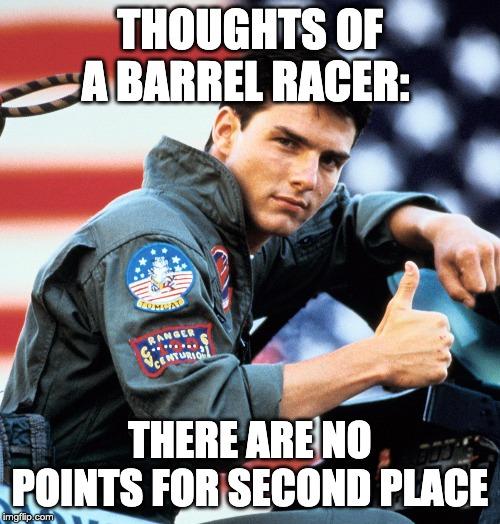 It’s a good thing fellow riders can’t hear your thoughts, or they might hear these quotes from Top Gun as you’re warming up for your next barrel race.

With the trailer of Top Gun: Maverick flying around the internet (see what I did there?), the 80s kid in me is getting nostalgic for the original Top Gun. Okay, so maybe it wasn’t the most complicated plot line and the character arcs weren’t really, well, arcs, but I would 100% be lying if I said I didn’t enjoy singing along to Tom Cruise’s and Anthony Edwards’s rendition of “You’ve Lost That Loving Feeling.”

I would also be lying if I said I didn’t know most of the lines of the movie by heart (again, I was a child of the 80s — we didn’t have the internet, we just rewatched the same VHS tapes on our VCRs). As those lines have been replaying themselves in my head, I’ve realized that so many of the things that Maverick, Goose and the other characters say could easily double for thoughts that go through your head when you’re riding in the warm-up pen before a barrel race.

Barrel racing warm-up pens aren’t exactly known for their adherence to riding etiquette. For those of us sitting on the outside looking in, it seems a lot more like chaos than anything else (here’s an entertaining look at the riders you’ll meet in the barrel pen). Between the riders doing their best to sit their broncs, the children galloping full speed on their ponies, those running mini patterns in the middle of the arena and the rider actually trying to warm up her horse in the midst of it all, navigating the pen may seem like war … or maybe even a dog fight.

As you ride your horse around the warm-up pen, eyeing up these other competitors, so many thoughts go through your head. Many of them may seem remarkably similar to these 20 quotes from Top Gun.

1. Maverick: I feel the need…
Maverick/Goose: … the need for speed.

2. Slider: … whose butt did you kiss to get in here anyway?
Goose: Well, the list is long, but distinguished.

7. Air Boss Johnson: Two of your snot-nose jockeys did a fly-by on my tower at over 400 KNOTS! I want somebody’s butt, I want it now, I’ve HAD IT! (probably referring to the kids running their ponies)

12. Charlie: You’re not going to be happy unless you’re going Mach 2 with your hair on fire.

14. Jester: His fitness report says it all. Flies by the seat of his pants. Completely unpredictable.

17. Charlie: A rolling reversal would work well in that situation.

19. Charlie: I heard the best of the best were going to be back here, so uh…
Maverick: his could be complicated. You know on the first one I crashed and burned.

Even if you didn’t repeat lines from Top Gun while you’re warming up for a race before, you probably will now.