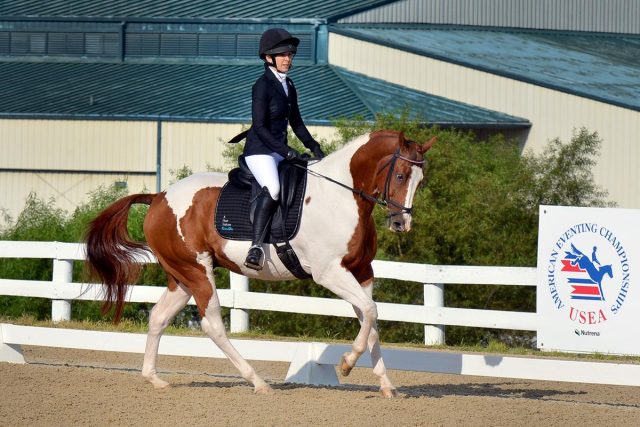 In this week’s installment of Lessons Learned, Ainsley discusses how her trip to AECs got started.

Once I found out we had qualified, I was torn making the decision of either vending at the USEA American Eventing Championships again (this is my third year sponsoring the event) OR competing at the legendary Kentucky Horse Park. After some encouragement from my friends, I decided to do both – I would vend AND ride. 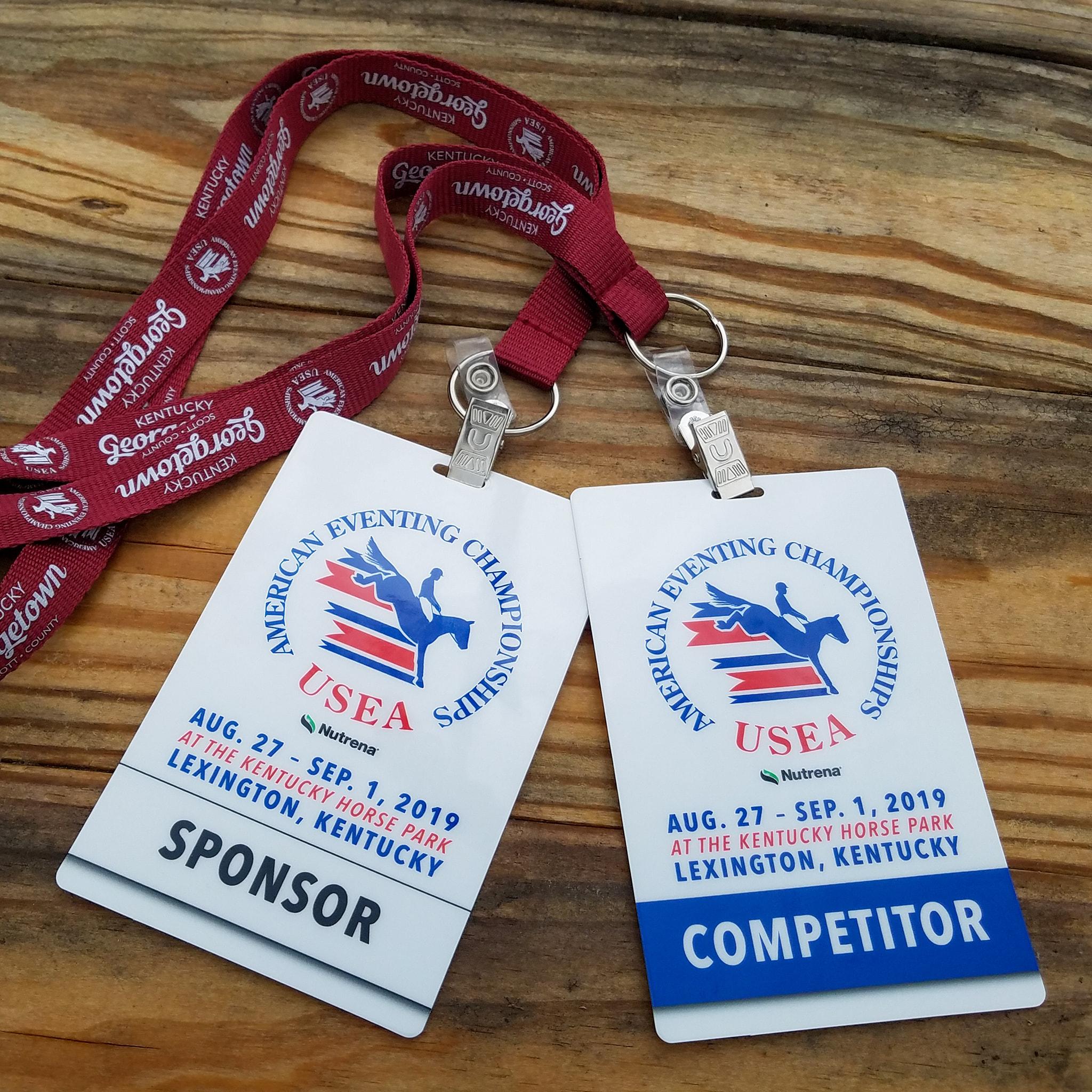 Because only a sane person would do both, right? Photo by Ainsley Jacobs/Ride Heels Down.

JJ’s flatwork has been getting progressively better lately. So much better, in fact, that we scored a 34 at our last Training CT, which is a huge improvement for us both!

I was feeling confident that we could totally rock a Beginner Novice test at the AECs, but JJ decided to throw a wrench in my plans when – the week before we left – he decided that bending right was no longer something he was capable of doing and halting without looking like a giraffe was a definite no. Crap.

So, we worked. And worked. And worked. He got a little better, but I scheduled him for a Come-to-Jesus meeting with Coach Lauren from River Birch Farm the week of our AEC debut (sorry buddy, you did it to yourself) so she could get him back on the straight and narrow.

Anyway, the drive up to Kentucky on Monday was pretty uneventful, other than me almost falling asleep about 17 times. Note to self: don’t die. Lauren was in charge of JJ’s transportation since her trailer is a thousand times nicer than mine (shameless plug: check out The Hitch and Tow if you need a great new trailer!) and she made sure he arrived safe and sound.

I had his stall bedded down with straw and shavings, ready for his arrival, and when he got there the first thing he did was… eat the straw. Seriously. Even with a yummy hay bag hanging in the corner, my weirdo horse decided the straw bedding was what he wanted. I can’t even with this kid. *shrug* 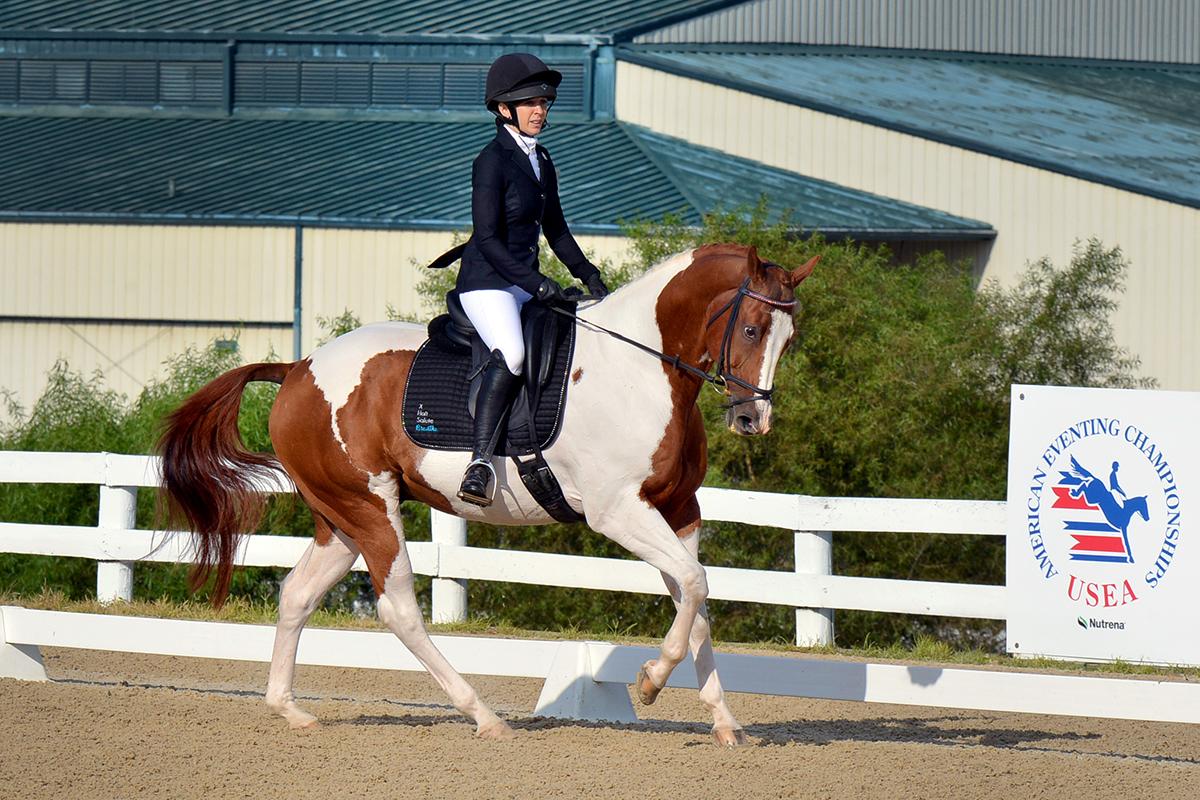 Time to get this party started! Photo by Xpress Foto.

Originally, my Ride Heels Down vendor booth was supposed to be over by the stabling area and JJ was going to be put near me to make things easy. Well, we actually wound up in Barn 26, which was clear across the park and super far away from where I was originally designated to set up, so the wonderful USEA team let me move my vendor booth to the main shopping center which was closer.

I definitely panicked at first wondering how I was going to make it all work, but was really grateful USEA was incredibly accommodating and hospitable in making sure I was taken care of. Thank you, Kate Lokey and team!!

It had been raining since the minute we arrived in Kentucky, so by the time I got JJ settled and got my vendor tent put up (thanks to the help from my husband, who didn’t complain once) I was thoroughly soaked and freezing. I headed back to my hotel to take a shower, get dry and get some sleep before the week’s insanity began.

To say I was worried about the logistics involved with taking care of JJ and running the Ride Heels Down booth is putting it mildly. I didn’t exactly have a plan, but decided to figure it out on the fly.

Fortunately, I had enlisted the help of Abigail Goodwin to be JJ’s official “babysitter” for the week so he would have someone to keep an eye on him, keep him in hay and water and pick his stall. My husband stepped up and handled JJ’s hand walking so he wouldn’t be miserable being incarcerated in a stall for a week, and I’m really grateful for their help.

So, Tuesday and Wednesday were pretty chill. Lauren gave JJ a much-needed training ride and I enjoyed a new office environment for my day job that just so happened to overlook the famous Rolex arena. 😉

Thursday I had a flat lesson, and I could feel a huge difference in JJ thanks to Lauren’s work with him. I felt confident about our odds to do a decent job going into the event, which would start for us on Friday morning…

CLICK HERE TO READ PART 2 AND FIND OUT HOW WE FINISHED!

Apparently straw is food. You can bring plenty of fancy hay and spend money on the good stuff, but sometimes your horse will want the equine equivalent of potato chips. *shrug*