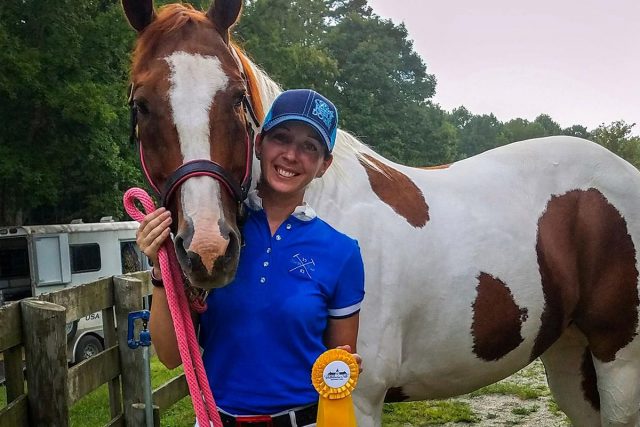 In this week’s Lessons Learned, Ainsley Jacobs reminisces on the importance of sharing when it comes to showing horses. Where would most of us be without it? 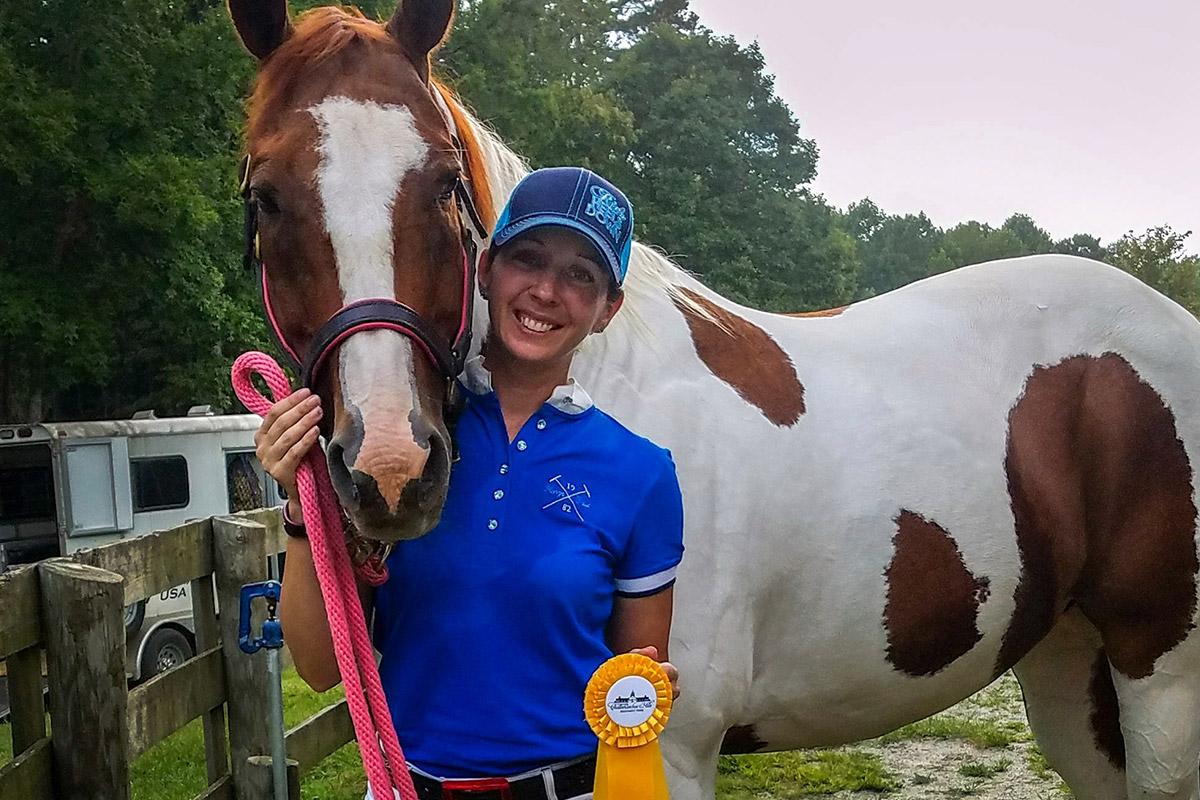 I think I’ll keep him. 🙂 Photo by Abigail Goodwin.

After learning that we had qualified for the American Eventing Championships, I wanted to get one last cross country schooling session in before JJ and I left for Kentucky, so we hopped on down to Chattahoochee Hills to do that and pop around a Training CT as well.

A work trip the weekend before the show meant I didn’t sit on JJ for an entire week. He let me know he had plenty of energy to spare in our first ride back, a jump lesson on Tuesday, and again during our flat lesson on Thursday. That ride, though, wasn’t what I had hoped.

To be honest, the Thursday lesson was shit. There’s some crap going on in my personal life and my mind just wasn’t there, which is weird because, usually, everything else disappears when I’m at the barn. This time, though, it followed me around the arena. My coach reminded me of all the little things I knew I should be doing but just wasn’t capable of comprehending at the moment. She was patient with my sudden regression of riding ability, and I appreciated it. And JJ did a great job participating despite my lack of being involved. My heart just wasn’t in it.

Friday I hauled down to Chatt, got JJ settled in, and tacked up for what was supposed to be a “light cross country school” to prep for the AECs. We wound up schooling a good portion of the Training course instead. All of which was fun and not at all scary, and did a ton of ditches and down banks (our weak points) and even the most trakehner-y faux-trakehner we’ve ever done. It was exactly what we both needed to get a boost of confidence.

That evening, I crashed at my barn bestie Beth’s house since she has a wonderful farm only five minutes away from Chatt. Her awesome husband, Josh, cooked us dinner and we relaxed and caught up since we don’t get to see each other nearly as often as I’d like. I promise I was a responsible adult and only had one drink and even went to bed early, but I woke up the next morning with a horse show hangover before the show even got started… hah!

I was exhausted and surprisingly sore from cross country schooling. So, after throwing JJ his breakfast and getting set up for the day’s fun, I enjoyed my favorite non-riding part of an event and took a nap. My fabulous coach Lauren Turner of River Birch Farm called about an hour later and asked me to come walk the stadium course again (it had changed slightly since we walked it the day before), but I bailed and went to eat lunch instead, then took another nap. #priorities

FINALLY, it was time to get ready for my 2:41pm dressage ride. JJ had enjoyed a good nap, too, so I woke up him and tacked up. We walked on down to warm-up and got started. He’s been great about trot lengthenings lately, but kept breaking into a canter in warm-up. Oh well, no biggie. Everything else felt solid, so in we went.

For the first half of our Training Test A, I was being chased by a bee right next to my ear and I was more focused on not dying rather than riding. The rest of the test went fairly well, and I purposely chose to keep our free walk and our trot/canter lengthenings conservative so he didn’t break gait. I felt like it was a mediocre test, but was pleased with how steady JJ was in the bridle overall. And I was pleased the bee did not kill me. 🙂

(I didn’t find out until the end of the day, but we had scored a 34.1! I didn’t care at first, but then I realized not only is that a better-than-average score for us, it’s actually a REALLY good score for us especially considering we were riding Training and not Novice!)

After more downtime, JJ and I headed down for our 4:38pm stadium ride. Unlike our last Training CT where I felt outclassed in warm-up, this time I felt confident and totally at ease. JJ was practically laughing at the warm up fences, and after a bit of a delay, we headed in right around 5:00pm. (Did I mention how effing hot it was? Because, holy crap, 5pm in GEORGIA in AUGUST is NOT FUN.)

It was a pretty twisty course, but that’s where JJ excels with his great cornering and automatic lead changes. Coach Lauren had reminded me to ride forward to the 5AB one-stride combo, so I did and it was textbook perfect. So, when we came to the 9AB one-stride combo, I guess my brain wrongly assumed it would be as good without any real effort… BIG shout out to JJ here for saving my ass and carrying us through safely and cleanly even though he had to add a chip. The GPS (as I call myself) glitched and I was grateful he had his autopilot mode engaged. 😉

Other than my “derp” moment, JJ was foot perfect the entire course and nailed every distance. We had a few lucky rubs but only took one rail at the end with a very slight hind-end tap, and I came out of the arena smiling and laughing because he had made it so much FUN. I still can’t believe that Training is so easy now after I used to cry in Beginner Novice warm-up.

I can only hope that everyone, one day, gets to enjoy a horse like JJ who makes jumping such a real joy.

We wound up finishing third, and I had an absolute blast. I was SO proud of JJ and how well he did, despite the heat.

Throughout the event, I noticed a theme… sharing.

Thanks to Lori & Jon Goodwin for sharing their time.
When I first arrived, my box fan wasn’t working. I thought it was the outlet, but it turned out the fan had died. And, with it being August and all, I really didn’t want to compete without one for JJ… but my River Birch family generously stepped up and made sure JJ got what he needed by making a Walmart run to get me a new fan.

Thanks to Abigail Goodwin sharing her equipment.
I forgot to pack my dressage pad after washing it last time, and Abby rescued me. I returned the favor my loaning her a sun shirt and a cross country watch. 🙂

Thanks to Beth Clymer for sharing her home and hosting a horsey slumber party.
Getting to spend the night hanging out with one of my closest friends was a real treat, and saved me a ton on not having to get a hotel. Plus, the dinner her husband cooked us was a nice surprise!

Thanks to Ansley Benfield for sharing her friendship, and her muscle.
I met Ansley at the 2018 Area III Championships when JJ tried to join her and her horse, Dawson, on XC and we’ve been friends ever since. She didn’t have her team to stable with this time out, so she was an honorary Team River Birch member for the weekend AND she helped me load my trailer in a hustle once the day was done and there was a storm moving in.

Thanks to Lauren Turner for sharing her excellent coaching and support, as always.
Because I wouldn’t be here if it weren’t for her.

And, of course, thanks to JJ for sharing his heart with me. ♥
He’s pretty dang perfect.

Here’s video of our super fun stadium round: