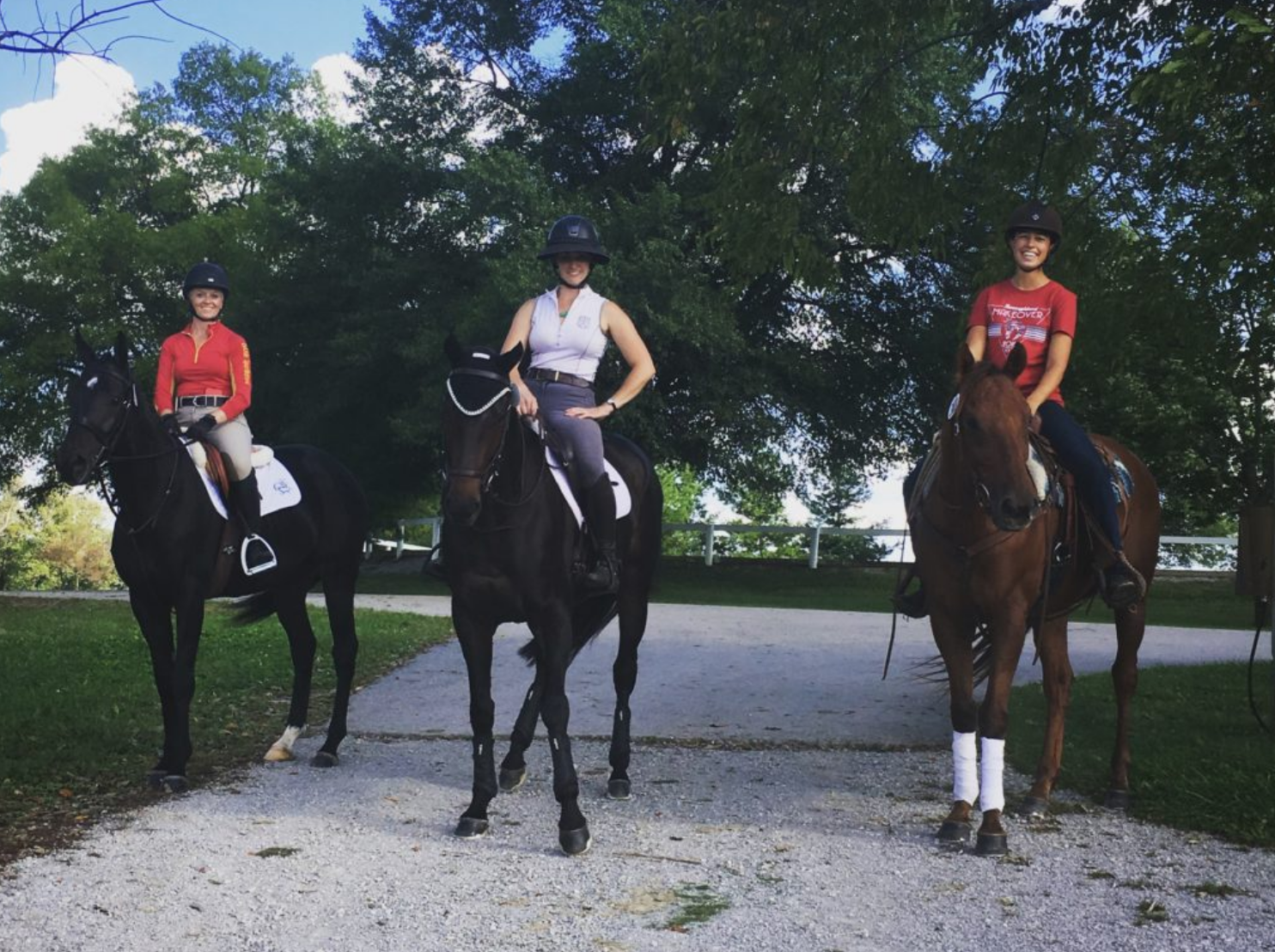 The Nation Media family is proud to cheer on a small herd of its own at the 2018 Thoroughbred Makeover! Horse Nation’s Kristen Kovatch, Jumper Nation’s Meagan DeLisle, and Eventing Nation’s Kate Samuels are at the KHP ready to represent. 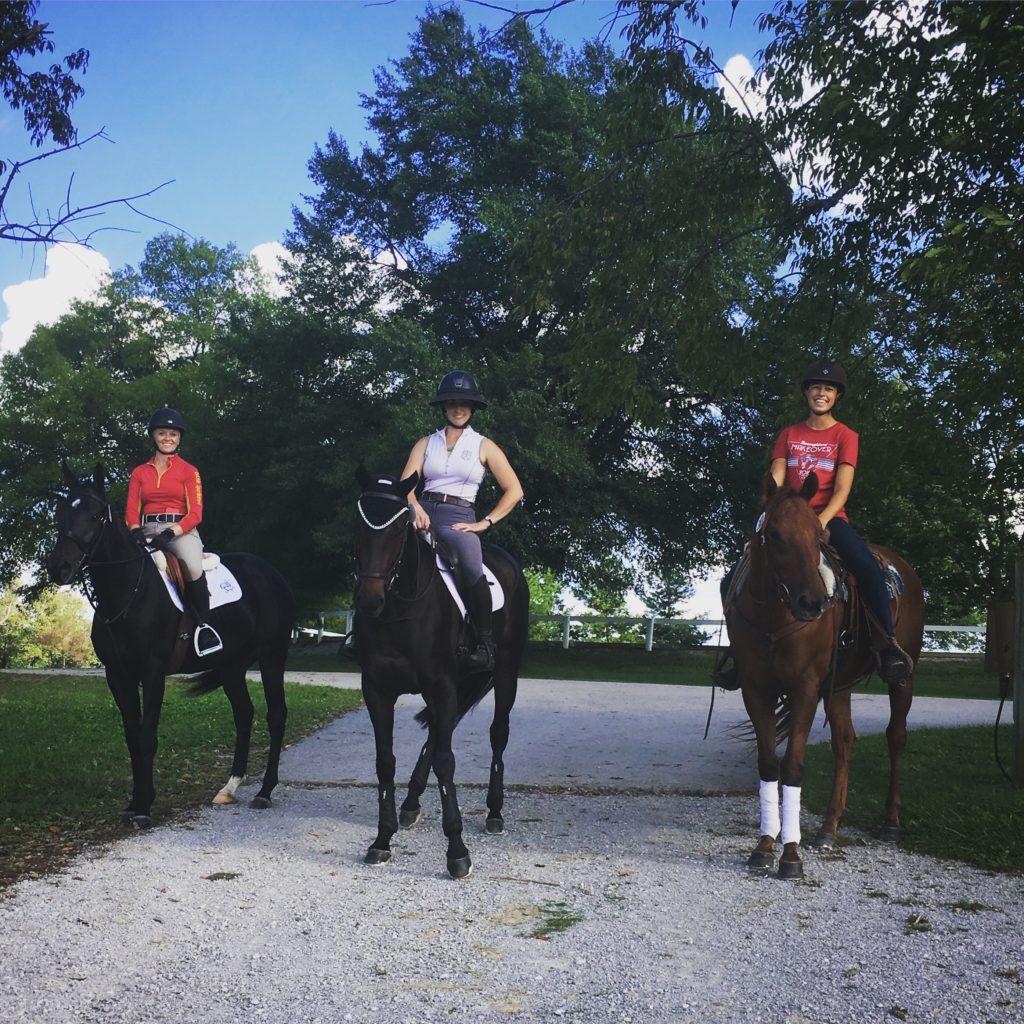 Let’s get to know the “United Nations”: Racing Career: Jobber Bill was no slouch on the track, earning $78,415 in 34 starts across five years. While he couldn’t necessarily find the wire first, Jobber Bill did finish second in 12 of his career start. He is the war horse of this crew!

Team Kristen + ‘Jobber’: Both in the saddle and at her desk, Kristen has long been a champion for off-track Thoroughbreds in productive second careers. Her website Horse Nation has vocal on the subject of OTTB advocacy and awareness, and then last year Kristen went all in, bringing “Jobber” into her life.

The love story of Kristen and Jobber is an epic one. Naturally it started right here on HN, when Kristen wrote a story about how Jobber went to live with his former exercise rider Jacklyn Wyatt after his retirement from racing at age 7. Jacklyn had fallen in love with him at the track — “He was such a pleasure to ride, had a nice way of going and an amazing personality,” she said — and when his number was up, Jacklyn was the first in line to give him a new lease on life. “Looking unabashedly ranchy up at the Rolex.” Photo by Dakota Rose.

Kristen herself, as it turned out, was second in line. When Jacklyn’s increased work travel schedule began putting a damper on her riding time, Jacklyn offered him to Kristen: “You should take him! He wants to be a cow pony.” And the rest, as they say, was history.

Kristen has been chronicling her journey with Jobber since the get-go via their “Race Horse to Ranch Horse” series on HN, and now they’re bringing us along to the Makeover via “Jobber Takes Kentucky” daily reports. At last check-in the whole stall confinement thing was cramping Jobber’s style, but Kristen is nursing him through it with her trademark patience, horsemanship and sense of humor.

Kristen and Jobber’s story is a testament to Thoroughbred versatility, and the power of caring individuals to make all the difference in a special OTTB’s life.

Follow Them: Check HN daily for blog updates! You can also follow them on Instagram (@thehorsebackwriter), on Facebook, or go find them at stall #1439/NM’s pop-up KHP office — look for the Horse Nation banner! Team Kate + ‘Turkey’: Kate picked up Turkomani (Jockey Club name) AKA Felix Felicis (USEA name) AKA Turkey (barn name) from Big Lick Racing Retirement last September. You’d likely recognize him from the pictures and updates Kate shares in News & Notes — she’s had a blast bringing him along and we’ve had almost as much fun following their progress. The pair made their official eventing debut together this summer, happily tackling Beginner Novice at the Maryland H.T. at Loch Moy in July then stepping up to Novice at Loudon Hunt the following month.

“I think this week will really educate him and make him a better horse,” Kate says. “Also, we get to do dressage in the Rolex stadium! I hope it inspires him to return to the horse park in a few years ….” Kate and Turkey made the trip from Virginia to the Kentucky Horse Park yesterday, and despite all of the luxury travel accommodations — box stall, alfalfa bucket, orchard grass hay bag, apple-flavored water, bandaged all-the-things — he still managed to scrape up his handsome face on the trailer. Keep it together, Turkey! Ironically, Kate’s very first EN post way back in 2012 was titled “To Bubble Wrap, Or Not To Bubble Wrap?” Some things never change.

Best of luck to this pair!

Follow Them: Kate’s Instagram (zeterroir) is an endless stream of Turkey pics and borderline pornographic baked goods photography.  You can also find them on Facebook, up with the sun here at EN every Wednesday and Thursday morning, or in the flesh at stall #0603. Racing Career: Flashback Justice earned $8,753 in 16 starts over the course of three years, never quite making it into the winner’s circle.

Team Meagan + ‘Flash’: Meagan bought the horse sight unseen last year. It was a leap of faith, no doubt: “Flash was a cute little four-year-old Thoroughbred, smaller than what most shoppers are looking for, with a big blue spot in one eye and osselets from his racing days. Like me, he was a bit of a mixed bag. Certain parts about him you loved and others made you think, ‘is this such a good idea?’ But I took one look at his photo and somehow just knew. Within a few hours, my funds were transferred and the deal was done. I had my first restart.”

Meagan fell in love with his silly, willing and lovable baby personality from the get-go, as became the pattern with everyone who met him. Despite a few bumps in the road thanks to his accident-prone nature, he took the retraining process in stride, and before long they were racking up the ribbons. “I’ve watched this horse grow from a high-headed drama llama to a fun little packer pony,” Meagan says. “He’s grown so much in our time together and so have I. Working with Flash has made me a better horseman and I’m so thankful that I got to mark this event off of my bucket list with this special little horse.”

A “little packer pony” who is making short work of some 1.0-meter fences! We’re so glad to see Megan’s leap of faith, coupled with a lot of hard work, pay off. You’ve got this, Meagan and Flash!

Follow Them: First things first, you MUST read Meagan’s essay about their road to the Makeover, “Who Is Training Who?” Written in Meagan’s ever-honest, humble and self-aware voice, be forewarned that you might want to have a tissue on hand. She’s blogging their Makeover adventure over at JN — see their first entry, “Makeover Moments with Flashback Justice: Day 1 and I’m Already Crying.” (Happy tears! And we’re sniffling right along with you, Meagan.) You can also find them on Instagram (meaganldelisle), on Facebook, and at stalls #1440-1441.