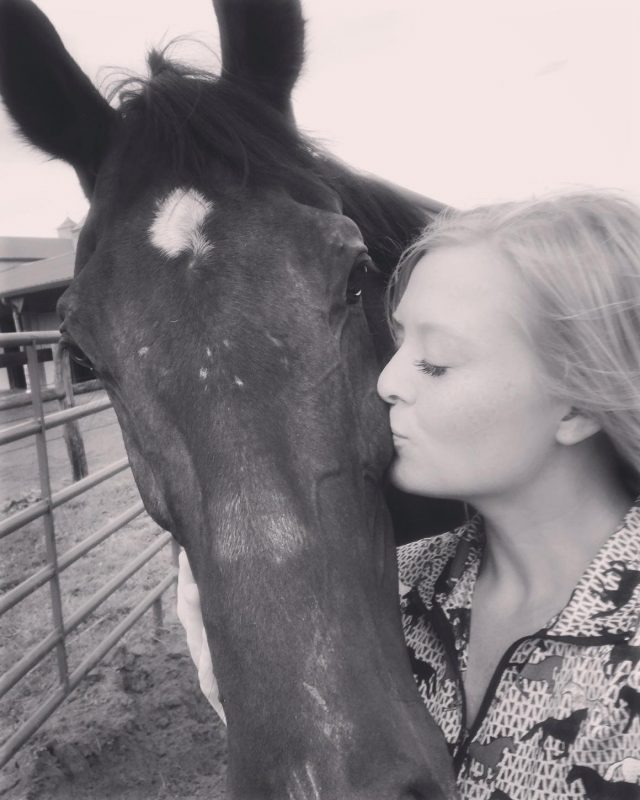 “Flash has changed me more than I have changed him.”

Recently a photo of Flash from the day I purchased him sight unseen popped up in my Facebook memories. It doesn’t feel like a whole year has passed since I jumped on the Thoroughbred Makeover bandwagon and joined the RRP family, but here we are. I have sat down at my computer several times over the last few days and tried to sum up just what this experience has been like for me and how it has impacted my life, but the words just haven’t felt right. And then, after having to leave Flash at my trainer’s barn for a week due to work issues, I got a text message that read, “Meagan… Flashy is the best horsey ever.”

I have always thought Flash was something worth fighting for. My experience training horses is frighteningly limited which should have been a big red flag when I woke up one day and said, “I want to do the Thoroughbred Makeover.” In true Meagan fashion, however, I just decided to dive in head-first and figure out how to swim later. In order for me to survive this endeavor with all of my limbs attached, it was going to take a pretty special horse to tolerate my amateur mistakes as I learned along the way. 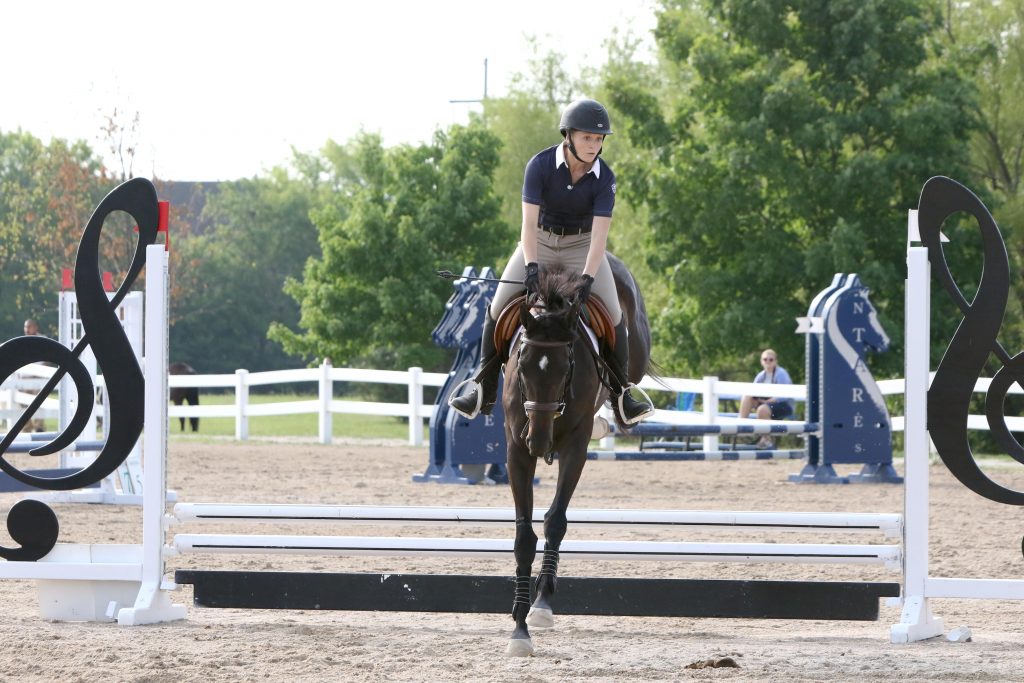 Flash was a cute little four-year-old Thoroughbred, smaller than what most shoppers are looking for, with a big blue spot in one eye and osselets from his racing days. Like me, he was a bit of a mixed bag. Certain parts about him you loved and others made you think, “is this such a good idea?” But I took one look at his photo and somehow just knew. Within a few hours, my funds were transferred and the deal was done. I had my first restart.

From the get-go, I loved my baby horse, and I wasn’t the only one. Everyone who met him fell in love with his charming demeanor. Despite a few bumps in the road thanks to his accident-prone nature, he took every bit of his retraining process in stride. When we reached a roadblock, he challenged me to find a new way to communicate what I wanted. When I wasn’t feeling confident, he put on his big boy pants and helped his mother out. He adapted to the Meagan that I was each day and pushed me to be a better horse person.

With each ouchie he came in from the field with, I became better at dressing wounds.

With each mild tantrum he threw leaving his friends at the barn, I became more patient and assertive (NOT aggressive).

With each clear round he put in, I became more grateful.

With each thing he questioned due only in part to his greenness, I became more humble.

A little bit of Makeover prep for Flashy baby before we head out next week. He was such a superstar today. He jumped the little wall with no hesitation and just plodded around the course happily. Even when I was flubbing through some rider errors, he just kept going. I just love this little horse. #ottb #ottbsofinstagram #thoroughbred #thoroughbredsofinstagram #retiredracehorse #equestrian #showjumper #showjumping #adultamateur #adultammystrong #flashbackjustice

We have eight months to transform these horses in preparation for the Thoroughbred Makeover. Most of us spend our time focusing on what we can do to make our horses better, but today it hit me:

In our eight months together, Flash has changed me more than I have changed him.

He is still the same silly, willing and lovable horse that came off the trailer this time last year. I, on the other hand, am a much different person than I was then and I have Flash to thank for that. He pushed me out of my comfort zone and then later became my comfort zone. His being in my life introduced me to new experiences and new people who have helped me mature as a horseman. Without Flash, I may have never ridden with Buck Brannaman or been brave enough to sign up for my first horse trials (which sadly got rained out, but I have no doubt that Flashy would have given me his all despite my fear of riding cross-country).

Flash has been such a phenomenal influence on my life. My only goal when I started this journey was to train a horse that a mother would love to have for her kids. And now here I am eight months later selfishly clinging onto him for myself so that my future (very far future) children will have such a special horse to ride. Flash has given me a whole new level of confidence in myself as a rider that I have always lacked. While I struggled through lesson after lesson of getting my job done right, he just toted me around as if that was his calling. When I wasn’t the most fair to him, he never held it against me. He allowed me the chance to learn that I haven’t always had before on more challenging horses. 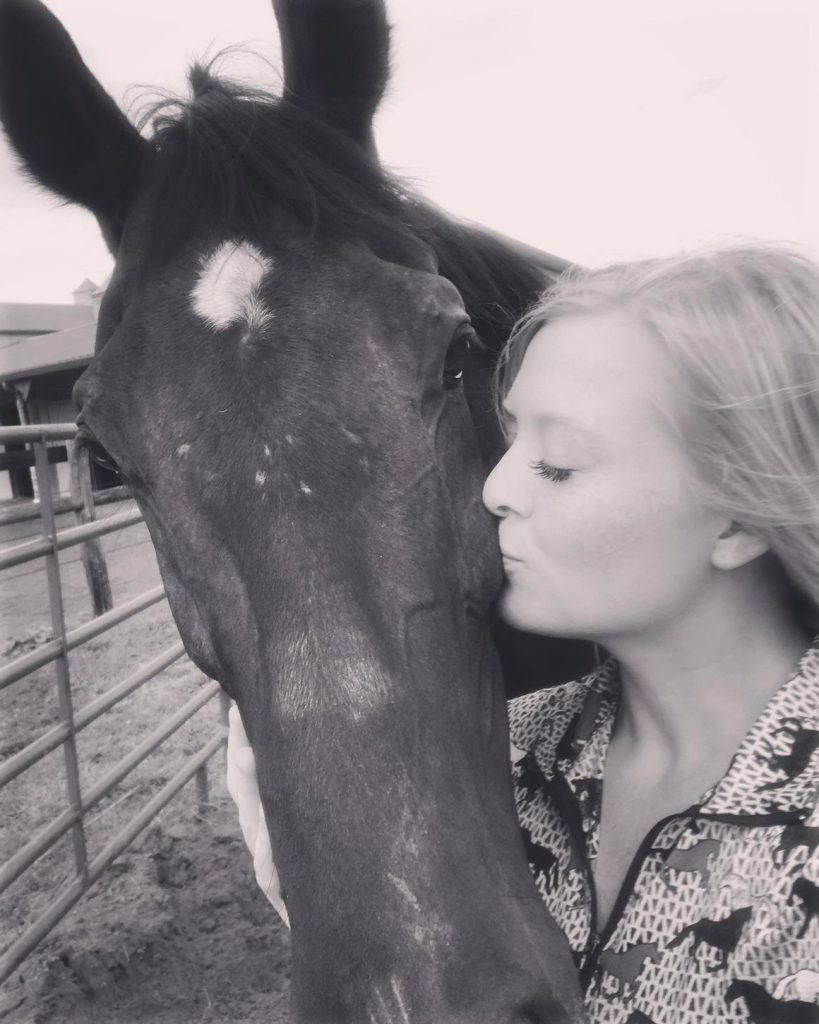 My trainer has always wanted to hop on Flash just for giggles to see how he would react to some bigger fences. Up until now I have done 100% of his retraining all by myself, so I was thrilled to see someone more skilled than I am hop on and do something more challenging with him. Imagine my surprise when my tiny 2’6″ packer sailed over 1.0m fences without hesitation and with room to spare. I nearly cried as my trainer went on and on about what a nice horse he was. I was just so proud of him.

These horses, whether they are our forever friends or projects for resale, they change our lives. I could have picked any horse on the internet, but something told me I needed Flash and Flash needed me. I think it was kismet, our coming together. We all have that horse that impacts our careers as riders and I think Flash is mine.

Who knows how we will do next weekend? We might get there and it may be cold as can be and we might lose our minds or he might jump his way to first place. Either way, one thing will remain the same: I am so thankful for this little horse and all the joy he has brought to my life.

Thank you, Flash. Thank you for making me love riding again.