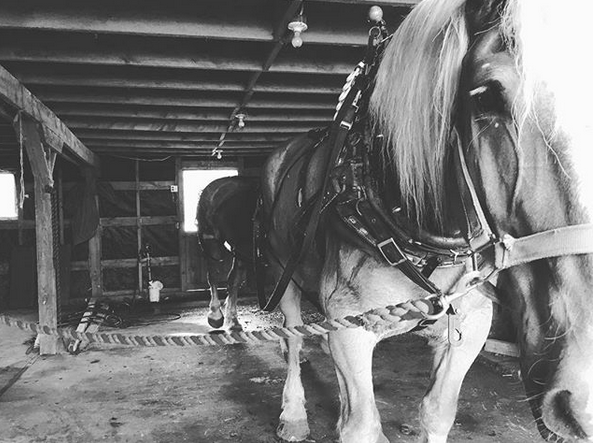 “Days later, I still find Rocky looking, his head lifted, ears patiently forward, eyes scanning the horizon slowly, as though Randy will come walking around the corner of the hill and back into our lives. I still find myself looking for Randy too. I expect we’ll be looking for him for quite some time.”

There’s a certain heaviness that settles on the heart when you can sense that something just isn’t right, and that sensation was growing heavier with every step I took across the long pasture on Monday, drawing slowly uphill. I couldn’t pick out the spot in the pasture when I stopped trying to convince myself that Randy was asleep, but by the time I reached him where he lay, his hitch partner Rocky standing sentinel another hundred feet up the hill as though he too was aware — and perhaps he was — I knew he was gone. 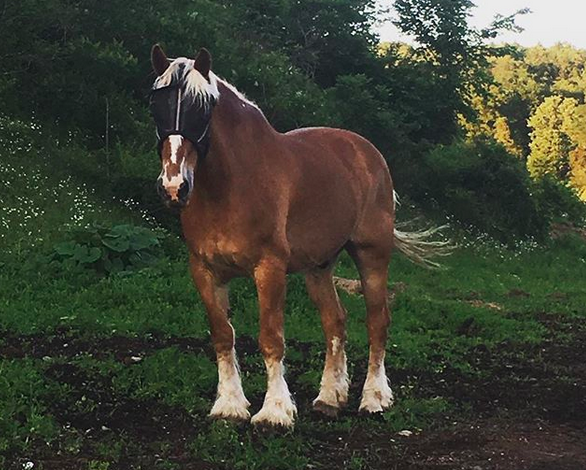 Randy was huge, in every sense of the word: a thick, cresty Belgian gelding with the ubiquitous dinner-plate hooves, a barrel-shaped horse built for moving mountains with a personality to match. This personality had blossomed in the last two years since Rocky and Randy had come home to the family farm; Randy might not always be the first to meet you at the gate but he certainly barged through the little herd until he was all you could see.

Like a good leader, he established himself in that position quietly: there was no great big show of teeth or hooves, no blowhard need to assert himself loudly, just his large, immovable bulk slowly muscling his way to the best bale in the feeder, the first spot by the barn door for grain, the run-in shed at the first hint of rain. He looked out for his own, with his first priority Rocky, his hitch partner of well over a decade, and then the rest of his herd on down the line — a leadership position I finally understood fully when I had tried to introduce my new horse Jobber into the herd in the fall only to have him run all over the paddock by King Randy, seeking to defend his people. (Randy had welcomed Jobber into the fold by February.) 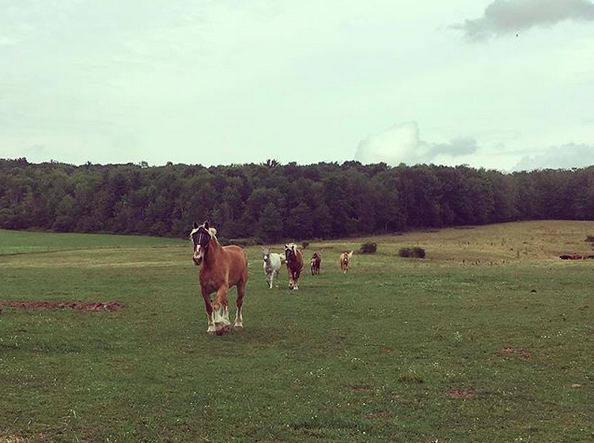 Randy, leading up the herd. Photo by Kristen Kovatch

When I had left my teaching position at Alfred University, I was at peace with the concept of saying goodbye to the various horses in the school herd who had been my co-workers and co-teachers for four years. They would be in good hands with the next instructor to step into my position. But as I walked down the long lane to the shady paddock where Rocky and Randy lived, tears blinded my eyes and I walked by memory alone. I’ve struggled for years to do literary justice to the rare air one breathes around draft horses, their presence and indescribable sense of otherness — they are horses like any other in theory, yes, but somehow they are so much more. Saying goodbye to these two and leaving them behind — having taught an estimated hundred-plus students how to drive, plus many other adventures — was the hardest part of leaving that job. 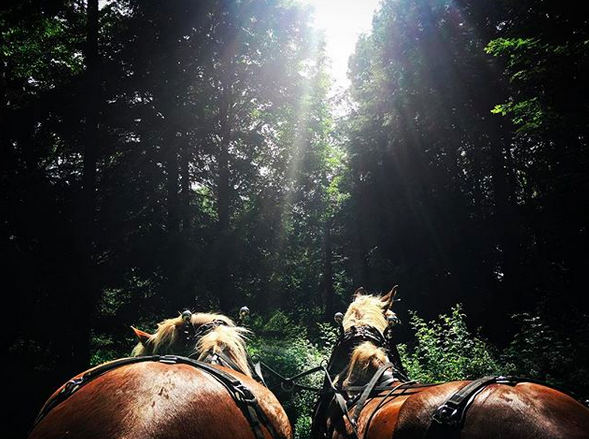 Surpassing all hope, we welcomed them back into our lives just two years later with the understanding that our farm would be their last home. The team was aging, but had plenty of life left in them: we drove all over our corner of the county, around the farmstand to take customers out to the pumpkin patch, down to the lakeshore to the summer cottages, around a great-aunt’s property and centuries-old barn to awaken the ghosts of years gone by, hauled to the gated community for a season of sleigh rides. It was the team that brought my now sister-in-law into my life while at Alfred, which in turn led to me meeting my now-husband. To give Rocky and Randy a safe, loving home seemed like a fairy-tale ending for all of us. 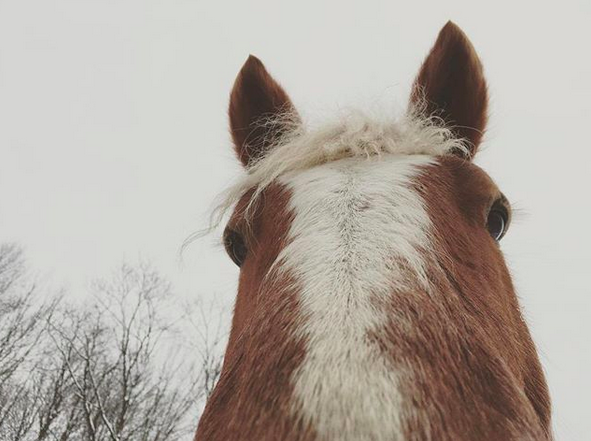 I had simultaneously kept my expectations low about Rocky and Randy’s retirement and looked forward to enjoying my time with the team for years: “the boys” were still in great shape, though Rocky had deteriorated somewhat due to the nature of his shivers and Randy had a few more creaks and pops in his joints than he used to. I knew they were here to retire and eventually pass on, and had prepared myself right from the get-go to make sure they knew plenty of love while knowing that this was the final stop. They were estimated at this point to be in their early twenties. 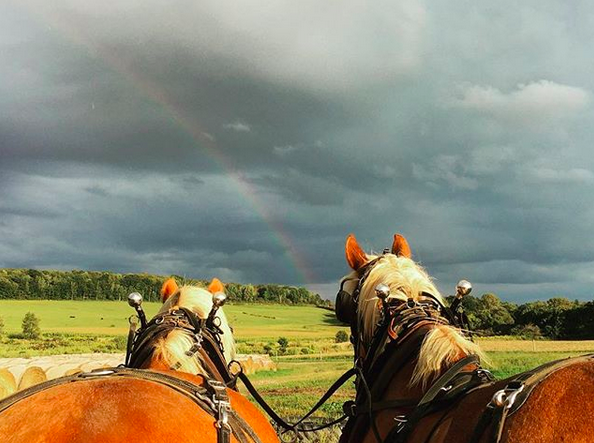 Somehow, it felt fitting that Randy would go this way, the biggest horse in my herd, the biggest presence: there was no sign of any struggle; he appeared to have dropped where he had been standing. Just the previous day he had led the herd at a full charge down the hill to me as I approached with the evening feed; earlier that morning the farm staff reported he had been full of spunk and had taken himself on a jolly chase of some of the cows. A thunderstorm had rolled through, and I can only speculate that it was a bolt from above that took my great big horse away, probably with very little awareness, suffering or pain. He may have been aged, but he looked like he was still in his prime. 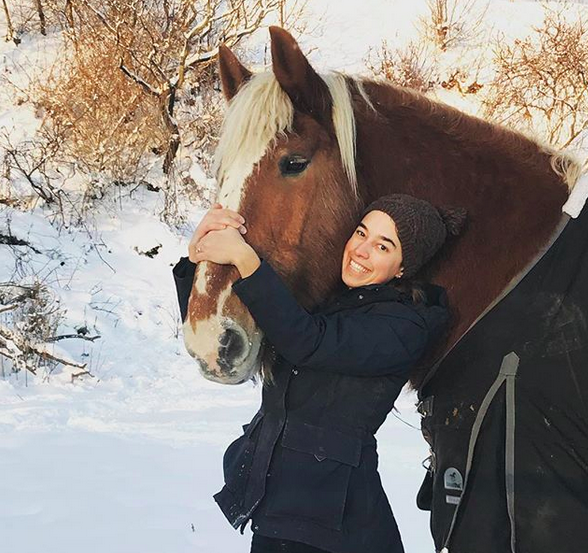 Randy, therefore, would not diminish slowly into old age or infirmity. While I certainly had hoped for more time, there is some peace in this. Passing as he did right in the pasture, it seems as though the other horses were able to see him and be aware that he was gone, especially Rocky, his partner of so many years. In my experience with the passing of horses, there is such a thing as closure for the other members of the herd. It may not make the loss any easier for us as humans, but I believe that horses are graced with both the ability to mourn and the ability to understand and accept.

There are details that will continue to sink in over the next days and weeks and months: Randy’s harness hanging empty in the tackroom, the weeds growing up around the horse-drawn spreader. I did not just lose a horse but a team; Rocky drives single quite nicely, but the sum of a team is of course greater than its parts, and that’s a tough loss to comprehend. I mourn the loss of my beloved giant, but I choose to remember all of the great experiences I had with Randy, and just how lucky I was to get these extra years and to be able to give him a home where he knew he was loved. 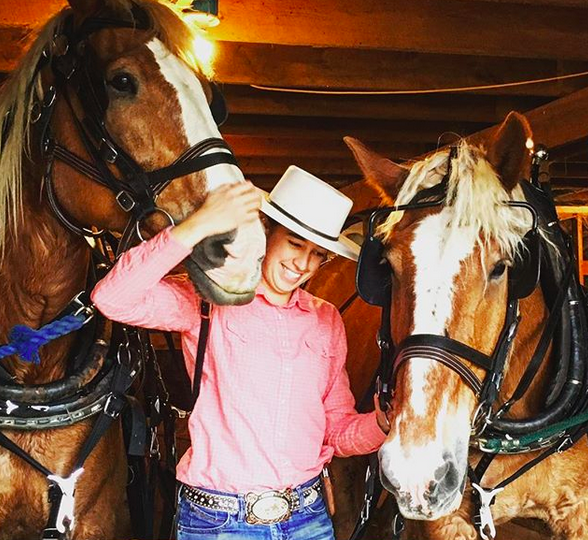 That evening, as I pulled out of the barn driveway, I turned my head to look out over the pasture where my little herd was grazing: already, the herd seemed somehow diminished without its biggest horse and biggest presence, and yet at the same time, it was as though they had closed the gap around Randy’s absence, adjusting to his passing. The horses grazed now in the last rays of the setting sun, the light setting the damp grass to sparkling.

I turned up the radio as the horses faded into my rearview. This was the first song to come on. It’s from the movie Pete’s Dragon, which I haven’t seen, but from my numerous comparisons of the “other” presence of draft horses to what I’d imagine it’s like to meet a mythical dragon, it seemed so fitting in every way. Like most songs by The Lumineers, it’s a little happy, a little sad.

Days later, I still find Rocky looking, his head lifted, ears patiently forward, eyes scanning the horizon slowly, as though Randy will come walking around the corner of the hill and back into our lives. I still find myself looking for Randy too. I expect we’ll be looking for him for quite some time. 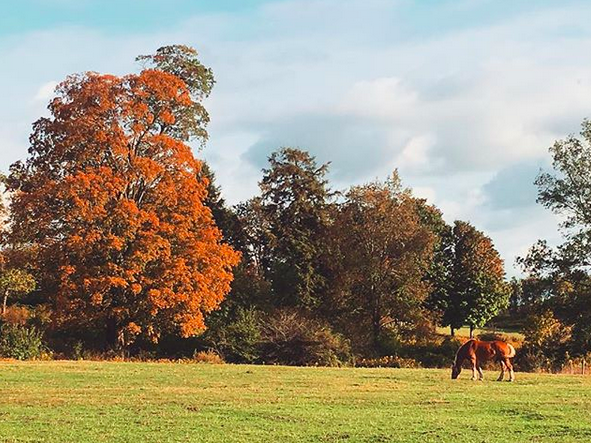