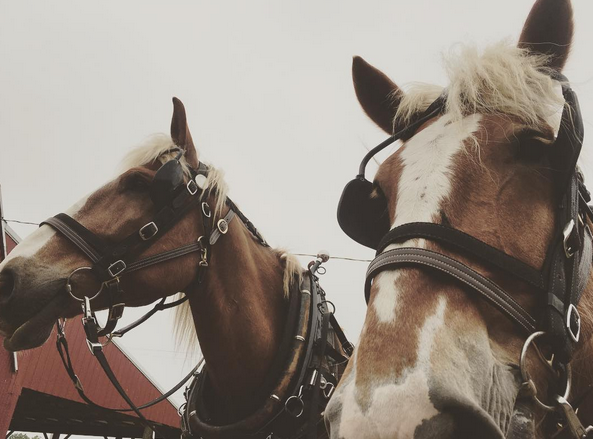 Rocky and Randy have been home for one year tomorrow.

The Letter From the Editor column is something new I’m trying in 2017, taking one piece a month to discuss various experiences, concepts and issues that I feel are universal across the equestrian world. We’ve talked about social media, serving as ambassadors to the entire equestrian world and that critical first ride we all took whether it was decades ago or last week. This month is a bit of a departure from that model, something a little more self-indulgent, as tomorrow marks the one-year anniversary of the day I brought Rocky and Randy home.

Rocky and Randy are a pair of Belgian draft horses, vaguely teenaged, paired as work partners for as long as I’ve known them, not true brothers as far as I would guess from looking at their conformation but certainly brothers in spirit. We first came into each others’ lives during my second year of teaching and coaching riding at a small university: I inherited the driving program when the adjunct teacher moved on simultaneous to the school acquiring a new team. Due to medical reasons, the previous owner was forced to part with his Belgians and was in no condition to tell us much about them.

Fortunately, I had a very experienced teaching assistant, a senior named Kaitlyn, who gallantly spent some extra hours with me at the equestrian center trying to learn everything we could about Rocky and Randy before our first class of students trooped up the hill to learn how to drive. Randy was a little standoffish and suspicious; Rocky was patient but also suffered from shivers meaning that one hind leg would sometimes hike up into the air with little warning which was often quite surprising to our students, some of whom had never worked with horses before.

We all got to know each other quickly, and over the next few years of driving classes, summer camps, winter Santa drives (during which I met some of the nicest and also some of the meanest Santa actors in existence), random PR appearances on campus and at university sporting events, we grew comfortable with each other. The team was the centerpiece of my first date with the man whom I would eventually marry —  my loyal teaching assistant Kaitlyn’s brother, who I only met because of a great friendship with Kaitlyn tempered on the driver’s bench behind Rocky and Randy in the first place.

I had anywhere from twenty to thirty western horses under my care at any moment as well as Rocky and Randy; truly, I really only worked with the draft horses one day a week while I frantically tried to keep up with the western program and my sixty or seventy students I had in a given semester, but that one day was a moment of peace in my busy week, even as we ushered yet more students into the world of driving and draft horses.

I’ve written plenty on the indescribable presence of draft horses — there’s something otherwordly about the sheer mass of horseflesh combined with the gentlest of spirits, the sensation that a simple flexing of muscles and tendons and ligaments could unleash a wave of power tempered by a quiet personality that seeks to please. Rocky and Randy, while individually possessing their own unique personalities, were not unusual in these traits.

When the time was right for me to move on from this position, I don’t remember sentimentally walking through the aisle of the western barn to bid an individual farewell to each lesson horse. I do remember walking down the long lane to Rocky and Randy’s paddock with a heavy heart, dreading the last time I would throw my arms around their massive necks and bid them to be good boys for whoever inherited the honor of working with them next.

Imagine, then, the joy when I received the call that Rocky and Randy were looking for a home, and would I be interested? By grace, we had room on Kaitlyn’s farm where the horses could live out their days, going on pleasure drives and doing some light farm tasks. As soon as we could arrange it, we made the drive and brought our boys home.

Kaitlyn at the lines. Photo by Kristen Kovatch

It’s been a fascinating year that’s challenged me as a horsewoman, from tailoring a unique feeding program (Randy is a fairly easy keeper while Rocky’s shivers presents some new challenges) to physically making room on the farm (yes, it turns out that our ceiling was actually a lot lower than we thought once we stuck a couple of drafts in the barn). We’ve had all sorts of adventures, from the time we moved a covered wagon from one side of town to the other (delighting the locals to no end) to nearly tipping the forecart over on a pile of what we thought was soft manure that turned out to be firm earth; there was the time I thought I could ride Randy bareback and pony Rocky for some exercise until the neighbors started their rifle target practice within earshot (I didn’t exactly fall off but there was a long walk of shame back to the barn). It’s been a secret joy of mine to show the old-timers of our local draft horse club that yes, this is indeed my team, not my father-in-law’s or grandfather’s like everyone initially assumed.

And as for Rocky and Randy themselves, they’ve fit right into life here on the farm, taking in stride the movement of beef cattle, the bleating of anxious goats, the shenanigans of our light horses over whom they reign like giant benevolent emperors and the constant stream of farm stand customers marveling at their size, strength and beauty. As much as you can read a stoic draft horse’s emotions, I’d like to think they’re pretty happy here. Patient Rocky remains, well, our rock, and suspicious, standoffish Randy is now the first one at the gate for hugs and snuggles.

Whether they understand that we’ve all given each other a home for life, not just physically but emotionally as well, I’ll never know, but I’m eternally grateful for these horses and their beautiful presence, and the opportunity to give them the loving, forever home that they deserve.