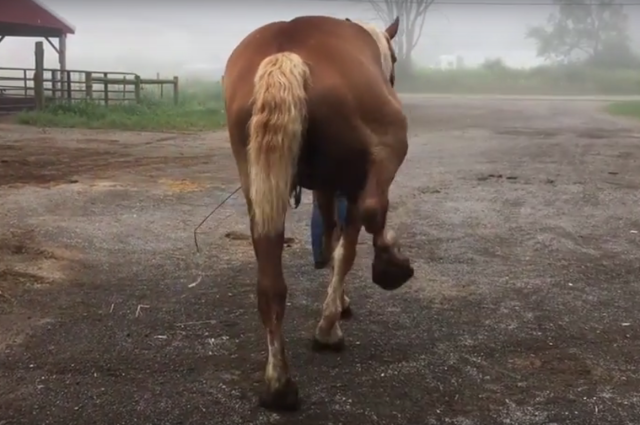 Amanda Uechi Ronan looks at a complicated and often misunderstood disease, and Kristen Kovatch provides personal insight into managing a horse with the condition.

Shivers, sometimes labeled as simply “shivering” in veterinary books, is a chronic neuromuscular disease of unknown cause — though a 2014 study has recently theorized the condition is linked to deterioration in the cerebellum region of the brain — that usually affects heavy draft breeds and horses of height.

What are the symptoms?

Shivering makes the muscles of the hind legs suddenly jerk and pull toward the abdomen, particularly when the horse is backing. The tail may also spasm. Both the hind legs and tail will shake and quiver. In severe cases, the disease may make it impossible for the horse to back at all. The affected horse may raise the hind limb, holding it aloft, until the spasm passes.

How is it diagnosed?

The symptoms for shivering is unique, but it is often misdiagnosed in its mild form. Long periods of time may elapse between symptoms, so careful observation by the owner and repeated lameness exams by a veterinarian are sometimes required. In advanced cases, the disease is usually very easy to recognize.

What is the treatment?

No medical treatment exists for shivering, though it is known that excitement and irritation can cause a flare up so keeping affected horses in a calm environment can alleviate symptoms. Many horses with shivers have high rates of Polysaccharide Storage Myopathy (PSSM), so veterinarians often recommend feeding a low-carb/high-fat diet.

What is the prognosis?

The disease is progressive and usually eventually career ending.

Regular fans of the “What the Muck” column might remember that Randy, the other half of the draft team I recently adopted, starred in the Squamous Cell Carcinoma installment including eye surgery. Now it’s Rocky’s turn — yep, that’s right. I adopted a pair of “broken” draft horses, and I don’t love them any less despite their various health issues.

Rocky is around 12 years old and has always had shivers as long as I’ve known him; our relationship began in 2007 or 2008. During that time, his symptoms have definitely progressed but he’s still leading a relatively normal and comfortable horse life.

Some research sources differ on how best to manage shivers symptoms, but I stand by the advice from my veterinarian that regular light work is the best solution: Fitness is key to slow the progression of symptoms, and as unfortunately there is no known cure for shivers the name of the game is keeping Rocky comfortable and as healthy as can be until the symptoms become unmanageable or degrade his quality of life.

Each shivers case, from what I understand, is unique. Here are the hallmarks of Rocky’s individual case: we videoed Rocky moving in-hand at the walk and the trot, as well as when harnessed, and I think you’ll be surprised at the difference between them. I also included video of Rocky’s “head wobble” which is equal parts endearing, amusing, and a little sad.

Rocky at the walk: His “shivers leg” as we call it, the right hind, is pretty exaggerated in this video, and he’s got a little bit of “weirdness” in his left hind as well. Rocky does seem to have good days and bad days with symptoms, and the day that we recorded this video was a particularly bad day for him. His walk is typically not quite this exaggerated.

Rocky at the trot: It takes him a minute or two to figure out what I’m asking for, but it’s interesting to me that he is not nearly as funky-looking as he is at the walk.

Rocky in harness: Note the movement in that right hind when Rocky is hooked up — it’s certainly noticeable to even a casual equestrian observer, but it’s so drastically reduced compared to the above video of Rocky in-hand. When we drive at the trot the shivers is almost totally unnoticeable. (Rocky is the horse closest to the camera.)

Rocky’s head wobble: Again, this is equal parts cute and sad. He’ll do this in the barn when we’re grooming and harnessing, and also out in the pasture when he’s just hanging out with Randy. This light wobble is normal; he will also do a more violent wobble when he’s startled or stressed.

I don’t have any video of Rocky under saddle but his movement is much more like his movement in-hand and much less like his movement in harness, so I like to drive him as much as possible as opposed to riding him. He’s on a low starch/low sugar feed and he also receives a Vitamin E/selenium supplement, which provides support to horses with neuromuscular conditions.

For the near future, I’ll continue to work Rocky in harness — we’re not doing super-intense farm work like plowing virgin earth or skidding giant logs out of the woods, but light jobs like spreading manure, dragging the pastures with a chain harrow and probably giving some sleigh rides this winter.

I’d be remiss if I did not mention my amazing farrier, who has the patience of saints for dealing with Rocky’s condition: he’s extraordinarily considerate of the horse’s limitations and does everything in his power to make sure Rocky’s as comfortable as possible even when it makes more work for him. Having a great farrier that understands shivers and the way it affects a horse is absolutely critical — it’s not bad behavior that makes Rocky jerk those hind feet away, and my farrier is very accommodating in those situations.

I also believe that a large part of Rocky’s continued comfort and fitness comes from working with a partner. I don’t have any scientific basis for this belief, only my observations — but I think Rocky thrives in part thanks to Randy, especially when they’re harnessed. While Rocky is still pulling his weight in the team, Randy will “help” him make turns or steps that are more difficult for Rocky, and I believe that Randy understands that Rocky is slightly limited. Their teamwork surpasses what I’ve observed in other draft teams and it’s moving to see it in action.

If you suspect you have a horse suffering from shivers: Definitely speak with your veterinarian. Because not much is known about this condition, it can be difficult to diagnose, but it’s also important to make sure your horse is not suffering from a physical and treatable condition that may present similarly to shivers, such as stringhalt.