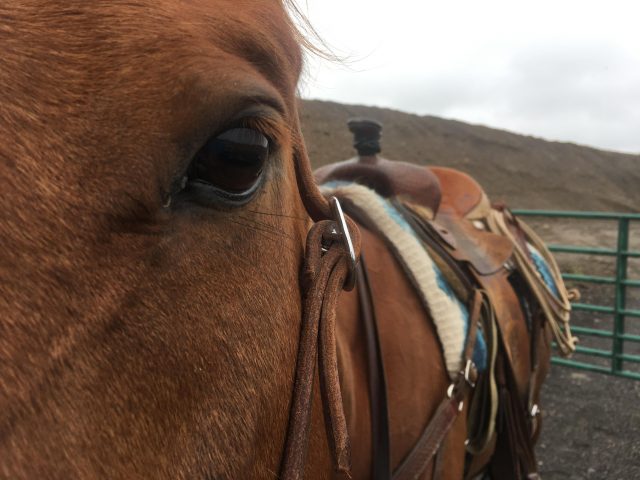 “The moral of this story, kids? None of us are too good for a trainer, even if that trainer can only come by once a month. Flatwork is flatwork — it doesn’t matter if you’re running barrels, chasing cows or training dressage.”

Well, I can always enter him in the Makeover sale and advertise him as an arena horse, I thought to myself glumly one afternoon in early spring as I untacked Jobber after yet another minimally-productive ride.

It’s not that Jobber had even done anything particularly wrong — it was just the sensation of general unease in the horse that was so discouraging. It didn’t feel like a physical problem: he moved out beautifully, felt totally sound and didn’t show any signs of actual discomfort. It wasn’t sourness: he worked really well in the catch-pen close to the barn where I had been long-lining as well as the small pasture where the cows were stationed until summer grazing began. He had even had a great field trip to an indoor where he far surpassed my expectations, performing right off the trailer like he had been a show horse all his life.

But as soon as we got into the big pasture, with its enticing broad valley floor where I had hoped to put in most of my training work, plus the gorgeous conditioning hills, varying in height and steepness for whatever exercises my heart desired, Jobber just never seemed to settle, a sort of vague sensation in which he spent a lot of time chewing on the bit, sidling around and slowly edging towards the gate that would lead us home. I liked Jobber a lot, but a horse that couldn’t work out in the big field certainly had limited prospects at this farm.

Perhaps he never would settle, I started telling myself. I had always believed that with enough time, any horse could be a trail horse or hack happily in wide-open spaces without the security of four arena walls. But despite a winter of slow in-hand work out in that space and the gradual building-block foundation I felt I had put into the horse, it just didn’t seem to be panning out. Perhaps it was the ghost of old anxieties from my last horse haunting our rides; perhaps it just wasn’t possible for a rider of my skill set to turn a racehorse into a ranch horse. 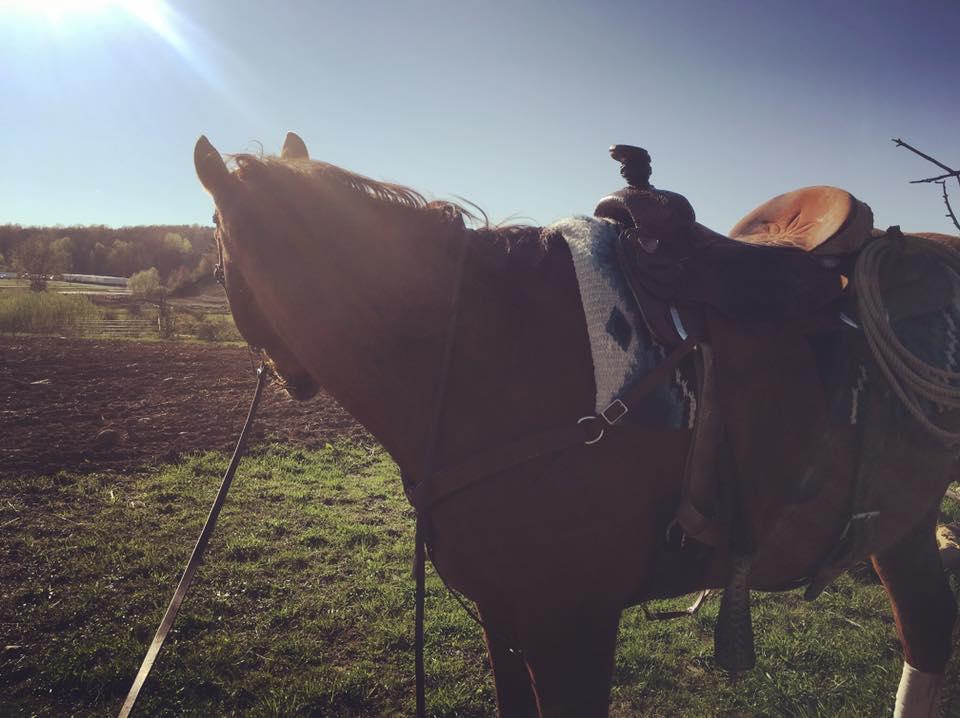 If I sound overdramatic when I say that one single lesson proved to be the turning point that gave me the key to move forward, I don’t mean to be hyperbolic — but if there’s been one pivotal moment in this horse-and-rider journey, it was my first mounted lesson with Nancy.

I described our first lesson with Nancy in my most recent installment, in which she introduced long-lining to help Jobber understand how to accept contact. A wet and generally unruly spring prevented her from returning, and me from doing much more than walking with some trotting, for about a month — enough time for me to establish that especially at the trot, Jobber had a strong tendency to bulge out or drop a shoulder (mostly depending on where we were in relation to that homeward gate).

Nancy watched us walk and trot around for a few minutes, then reminded me to use an opening rein to help guide the shoulder. After another minute or two of observation, she called me over to a halt and took hold of my hands.

An opening rein has many possible purposes, but for a green horse it’s a critical aid to help him learn to keep his shoulders straight (or straight while turning). “I’ve been doing that,” I may have actually said out loud as Nancy strolled across the grass to meet me.

Yeah, okay, I may have been doing that, but not in a way that Jobber understood whatsoever — more just like going through the motions. As Nancy manipulated my hands and let me feel exactly what she had in mind (namely, actually feeling Jobber’s mouth) the proverbial lightbulb clicked on. 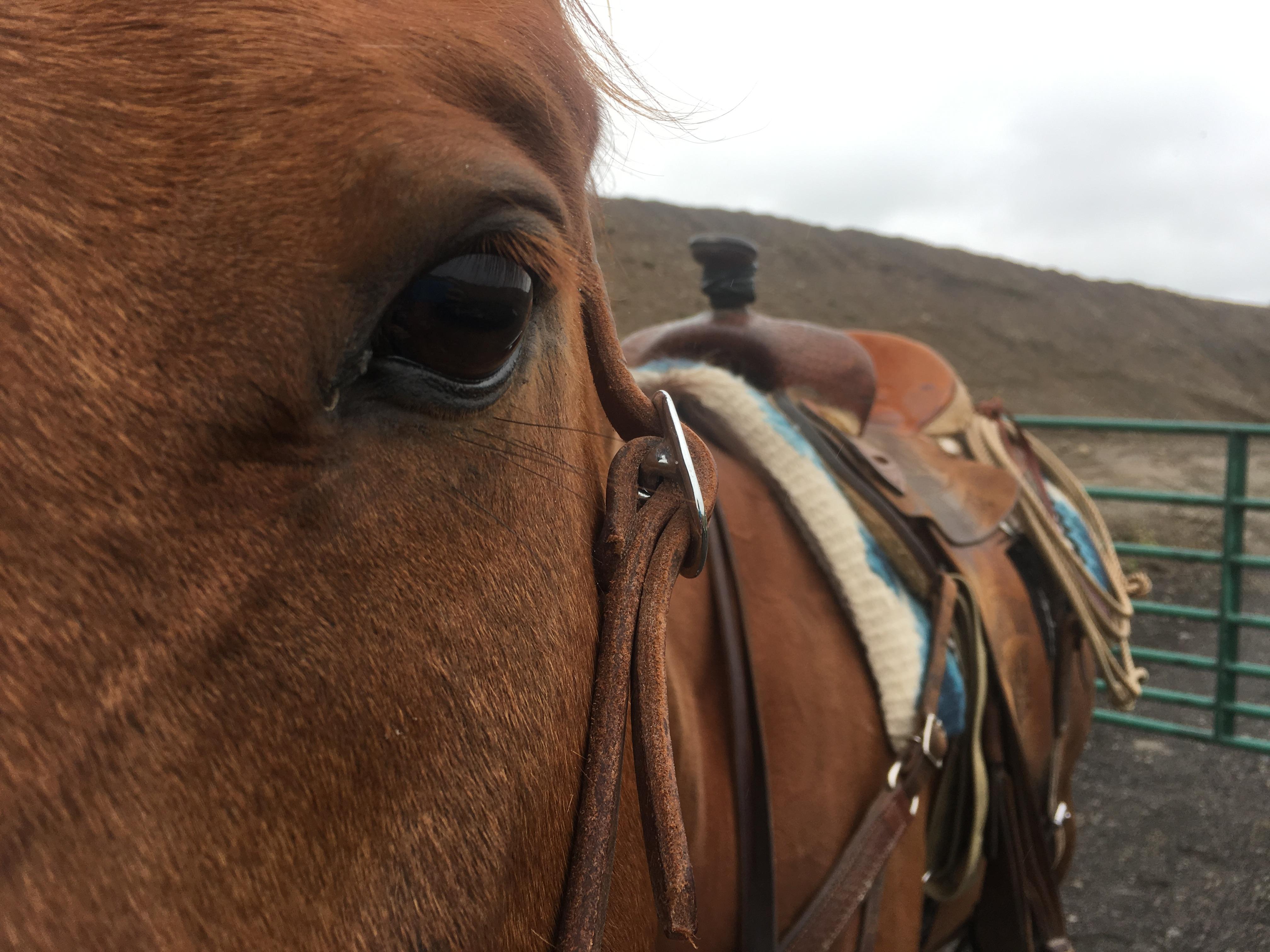 “Kindly excuse my long-winded human while she pontificates some more.” Photo by Kristen Kovatch

My equine background (probably like most riders, I’d imagine) is a pretty mixed bag — I’ve started green horses on a ranch in Wyoming, where all of our training was done on the trails; I’ve done the more “conventional” natural horsemanship/roundpen colt starting through a university class; I’ve ridden and re-schooled a lot of extraordinarily well-broke horses in my time as a university trainer. It occurred to me at that moment, however, that I had a major hole in my background: bringing along the green horse, taking him from basically-broke to well-broke.

In my attempts to “stay off of his mouth,” I had been giving Jobber very little information at all while riding. Early on, when transitioning to the farm and its various spaces, I thought this style — which in my mind was “light contact,” or taking up rein only as needed to help guide or gather — was pretty important, and I think it was. Jobber learned how to carry himself, how to navigate things like natural logs and ditches and hills and creek crossings independently without me dictating where every single foot had to go. I like that kind of independence in a horse.

But now it was having the opposite effect — Jobber wasn’t getting enough information from me to have any idea of what he was supposed to be doing. He didn’t know how to stay straight while turning because I never helped him find that path. For all my earlier steps to chunk down other challenges, this particular challenge needed to be chunked down in ways I didn’t know I didn’t know.

Nancy had me first simply move Jobber’s shoulders to the right, then the left, while walking on a straight line: starting with even contact on the bit, I opened the rein to the right and pushed with the left leg, literally escorting his shoulder through the open right door. From this line we worked up to circles at the trot, and then stepped into a few lope transitions. By the end of the lesson, Jobber had stepped easily into both leads of lope and his excited head-tossing into the transition was starting to quiet.

We were so focused on what we were doing that no one remembered to take any video, but here’s a video from the following day, courtesy of Erik Bentley:

Some video from Friday, one day after our most recent lesson. We've been working on quiet canter transitions, and while I don't have video from today, I'm thrilled with what we accomplished: quiet upward transitions into both leads, in a different pasture where we haven't been very confident to go until now.THANKS, NANCY! This lesson was the biggest turning point in our progress so far. My next Jobber blog will go into more detail on what specific exercises and techniques we're using.

It’s as though Jobber has been a changed horse since then: we’ve been putting in some highly productive rides all over the farm (the above pasture, plus the big hill you can see in the background) and our lope transition is as quiet as they come now. We can wander the fields on a loose rein, too, all traces of that former anxiety gone. All he wanted all along was a little guidance, a little contact, a reminder from that crazy lady sitting up on his back that someone was in charge.

I realize that it’s not that Jobber has been miraculously transformed — I mean, yes, he’s undergone a big change in the way he’s going. The biggest transformation, of course, has been in me and the way I ride him, gradually filling in the holes in my knowledge, becoming the rider that Jobber requires. It’s a testament to the horse that he’s the blank slate on which I learn.

The moral of this story, kids? None of us are too good for a trainer, even if that trainer can only come by once a month. Flatwork is flatwork — it doesn’t matter if you’re running barrels, chasing cows or training dressage. If your trainer understands your individual goals, they should be able to tailor a lesson that will help. Without Nancy, I would still be anxiously wandering the hills, reins a-flapping in the breeze, waiting for Jobber to somehow put the pieces together himself.

This remarkable sea change aside, we also shipped back to Alfred for a tiny open show, which I thought was the perfect place to expose Jobber to things like an announcer, a schooling ring and the relative chaos of showing off the trailer. He navigated all of these questions beautifully; he was a little unsettled when we first arrived but visibly quieted as soon as I hopped on for schooling. In a very mixed bag of a class — a little girl whose youth class got combined with the adult walk-trot, two colts under saddle for 30 days and what I think was maybe a hunt seat horse dabbling western for the day — Jobber earned two second-place ribbons and a wealth of experience.

Jobber went to his first show today: a very small schooling affair at Alfred University. Here's our walk-jog pleasure class courtesy of Kaitlyn Bentley, the best show mom.My goals for today were to have a positive show exposure: loudspeakers, schooling in company and plodding along happily with everyone else in the class. I showed in just the walk-jog classes for today for a positive experience on which we can move forward.Our trail patterns outside were good practice as well. Jobber schooled the obstacles well in practice and had a decent judged trip with Kaitlyn; during our trip it started to rain and Jobber decided he had had enough of that and turned his tail to wisely wait it out. Smart man.No one seems to know what the trail results were as the judge's card soaked through by the end and we left before the class was over, but we did place second in both the pleasure and the horsemanship. I'm happy that Jobber had a good day and was a great ambassador for his breed!

My sister-in-law and I each showed him in the trail; Kaitlyn hadn’t ridden Jobber since last October when we had gone to look at him for the first time, so I was proud that she stepped right up to the challenge. She and Jobber navigated a bright white wooden bridge, weaved cones at a jog, managed a 450-degree turnaround, backed a dog leg and carried a bucket from one barrel to another. Halfway through my pattern, the skies opened up into an icy downpour and Jobber, like the bright individual that he is, promptly turned his tail and stood there, and I excused us from the ring. He didn’t know he was showing, so what was the point in forcing him into the foul weather?

All in all, it was a great show experience. My next goal is to haul him to a weekend cow horse show where he’ll be stalled — closer to conditions at the Thoroughbred Makeover in October — to gauge what kind of program he’ll need.