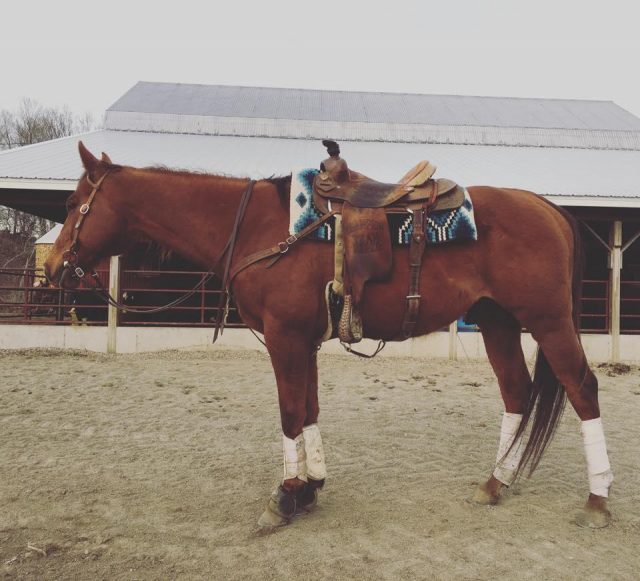 “Red taught me a lot of things as a horseperson, but he also put me on a hair trigger… The greatest lesson in patience so far in this retraining experience hasn’t been with Jobber or the weather — it’s been learning to be patient with myself.” 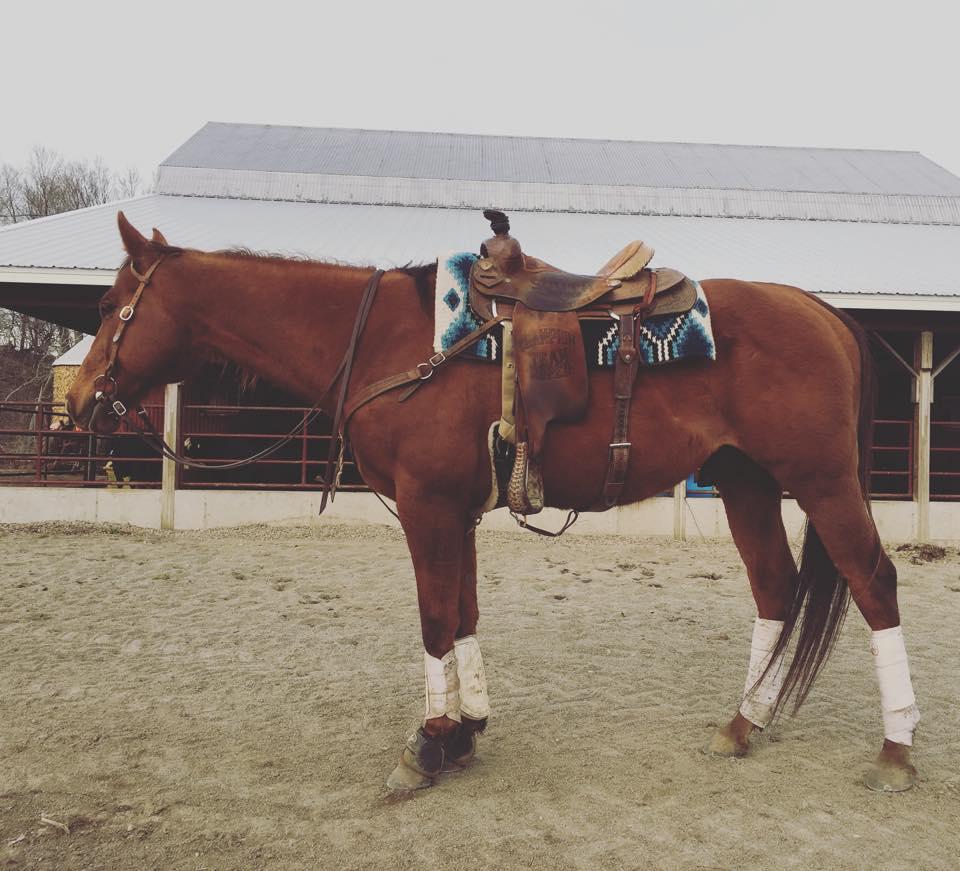 All photos by Kristen Kovatch.

“There are only two emotions that belong in the saddle: one is a sense of humor and the other is patience.” (John Lyons)

I’m sure Mr. Lyons was referring not just to riding the horse, but everything having to do with the horse as well. I’m a few weeks away from passing the six month milestone with Jobber Bill, my off-track Thoroughbred working his way towards ranch horse-hood: it’s been six months of remembering all the ways patience comes into play in a life with horses.

Patience should be pretty obvious as a critical ingredient in horse training, and I’d like to think that generally I’ve got the right mentality for training: even though the Thoroughbred Makeover looms less than six months away, I’m reminding myself over and over again that this is not a “deadline” at which Jobber needs to be finished and broke, but simply a great opportunity to network and celebrate the off-track horse with several hundred of my new closest friends and their horses, some of which will likely be about as “broke” as Jobber will be by then (which is to say, hopefully we’ll have both leads by then. I’m dreaming big).

Truthfully, working with Jobber is generally a real treat. I’ve never worked with a horse before who has learned so quickly and retained so much from day to day. While there are still a few big obstacles in our way — Jobber has reverted back to some anxiety about the big wide-open expanse of the cow pasture, and no, we really haven’t cantered hardly at all — I’m growing increasingly confident by the day that time will be all the “magic fix” we need.

In the past month, Jobber and I got a lesson from my old boss and mentor Nancy Kohler, who has decades of experience in almost every riding discipline under the sun plus a USEF “r” judge’s card in hunters and jumpers. She made the trek out to the farm to introduce long lining, the first step towards getting Jobber to accept more contact and drive up from behind. I’ve been able to long line Jobber several times since then, aided in part by the snow pile that resides in this enclosed catch-pen finally melting! 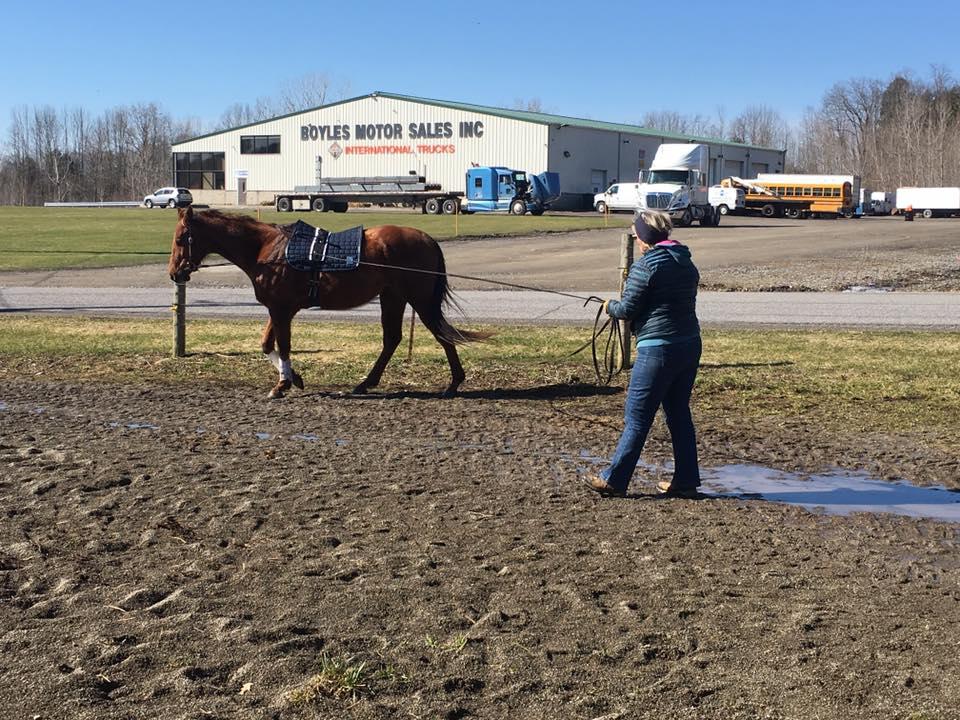 Patience… with the weather

It seems like for most of us all across Horse Nation, to call this one of the longest winters in memory isn’t entirely hyperbole. Facebook memories kindly reminded me that yes, we have had snow around here in April before, but they’ve always been quick, single-day-and-gone-the-next affairs. It really wasn’t until this past weekend that the pastures had drained enough for consistent riding in which I could trot a circle and not worry about our feet sliding out from under us. 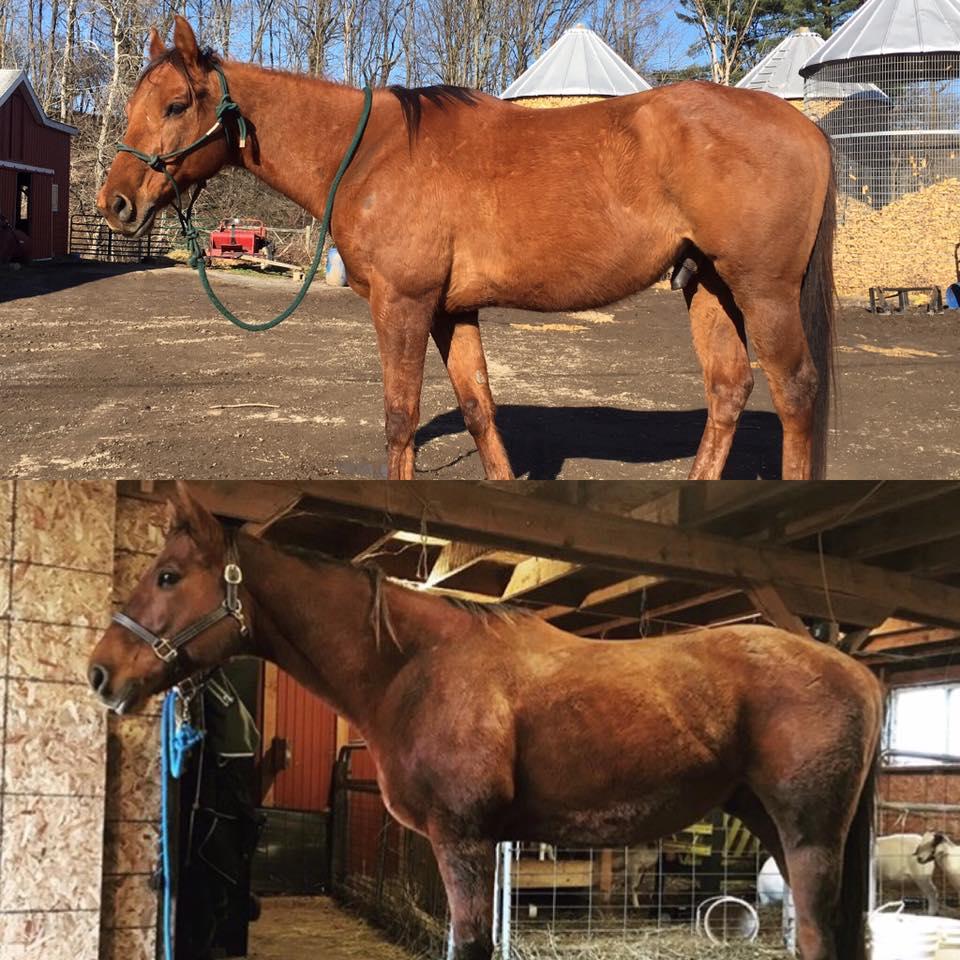 Especially in feeling that time and consistency could help “fix” the two biggest issues facing Jobber and me right now, it’s been beyond frustrating to feel like I’m spinning my wheels with nothing to do but wait for good weather. Sure, there were plenty of things we were able to do in the poor early spring weather, like some hill walking, more long lining sessions and Jobber’s first “real” cattle drive so we could sort out heifers. And perhaps a more talented trainer than myself could have Jobber more evenly muscled and fit enough to have a balanced canter on both leads by now, even with patchy weather and poor footing, so I shouldn’t complain too much.

Regardless, I’ll still be happy when consistent warm weather is here to stay. That’s all.

When you start to think of the farm as a "horse playground" there are truly endless possibilities for all the stuff we can do in a ride. Yes, even when it's snowing.

Writing about one’s personal horse experiences for the internet is a tricky business. No matter how honest those of us who choose to chronicle our personal journeys may aim to be, it’s remarkably difficult to tell the whole truth of a matter and put it out into the ether for the court of public opinion to read. For one, very few of us like to truly open up for potentially thousands of readers, revealing our personal weaknesses or shortcomings.

For another, when we do open up, we always run the risk of “armchair quarterbacks” (or in our case, armchair horse trainers who have never met us or our horses) at best offering comment after comment of unsolicited advice and at worst dragging us all over the web for perceived failures as horsepeople. (The story of the Chronicle blogger who received physical threats over email for her bit choices which she had kindly explained in a previous article always comes to mind.)

If you’re wondering where this is going, allow me to explain. Regular Horse Nation readers who don’t miss many stories may wonder what happened to my “original” cow pony, Red, the copper-penny chestnut with the blaze who starred in so many of my previous editorials and stories. Red’s still around, turned out for the winter as has become our custom once I realized he was the kind of horse who liked being in a program and did not appreciate random rides here and there when I could grab a break in the weather.

I may have alluded to Red’s various “issues” indirectly in the past: I found out (the hard way, of course) that he could not tie, as he would pull back from time to time dramatically in full panic (yes, including on a blocker ring, with such force that when he was eventually free of the ring he would fall down). We learned to ground tie. I learned to read his body language like I’ve never had to read a horse before, sensing tension that would escalate into an explosion in seconds. I learned to saddle him carefully, repeating slow belly lifts and releases with the cinch until he would sigh and relax, gradually tightening the cinch over ten or fifteen minutes.

His tack fit well; he had no apparent soreness or physical issues. He would simply be there with me happily, standing quietly ground-tied while I got him ready to ride, until suddenly he wasn’t — the panic would set in and the sweet Red that I knew would be gone, replaced by an explosion shooting backwards as a matter of course. Whether he was mentally recalling some past trauma that happened or experiencing a sudden physical pain I could not trace, I might never know.

I realize that horses don’t do things for no reason at all, and there’s always a trigger of some sort, even if it’s not readily apparent. Red’s been seen by a vet and given a clean bill of health; in all other ways, he is the picture of a happy, healthy animal. Remember what I said before about opening ourselves up to internet commentary? This one’s a doozy: who wants to proclaim to readers that they have a horse who panics, and they can’t figure out why or how to help?

While part of me tells myself that simply turning Red out and moving on to another horse is giving up, another part of me remembers that horses don’t have goals. They don’t think about their job or career track. They don’t worry about what the internet thinks of them; they worry about the next good patch of grass and playing face-tag with their buddies. Red was happy to go chase cows; he’s equally happy to stand around and eat with his friends. He’s a horse, after all. 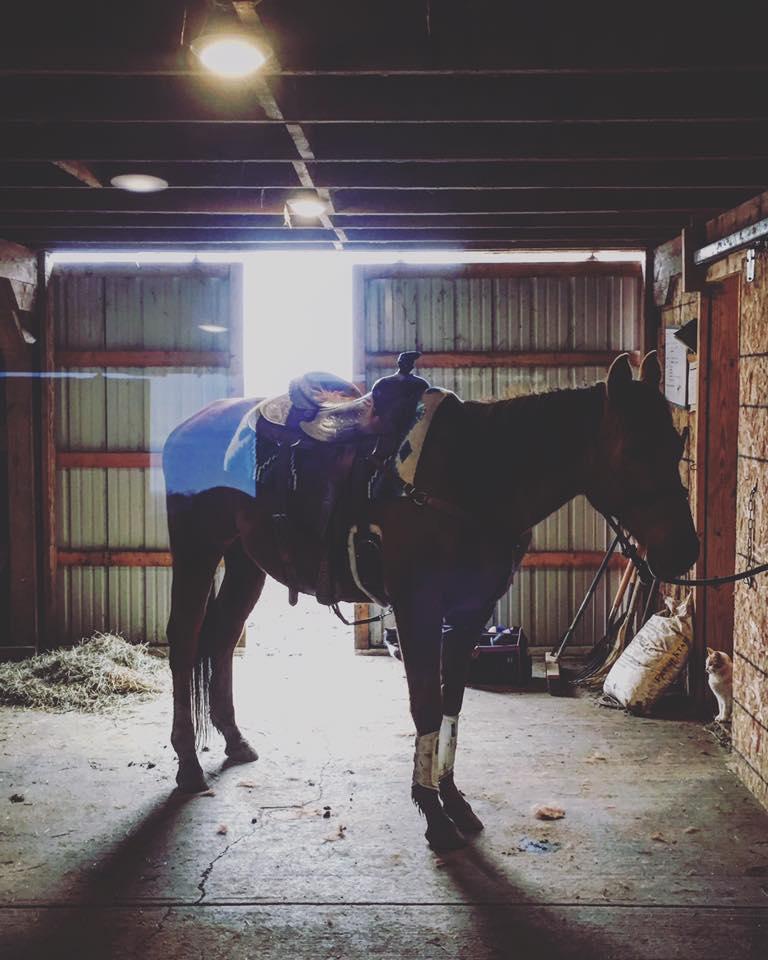 A quiet moment in the barn with Jobber.

What I didn’t realize is how much Red had trained me to walk on glass. The slightest tension in Jobber makes me instantly alert, anticipating a total meltdown (even though Red has never once had a “panic attack” under saddle). If Jobber looks wide-eyed at something for a moment, whether it’s a new piece of farm equipment or a cow off in the distance, I find myself braced for an explosion. Jobber has never bolted or reared; he’s spooked at things like ducks and my idiot dog leaping suddenly out of a ditch, but it’s a balanced, polite, quickly-brought-under-control spook. Red taught me a lot of things as a horseperson, but he also put me on a hair trigger.

It’s not fear or anxiety — saddling up Jobber and going for a ride is still the high point of my day, every day. But living my horse life waiting for the other shoe to drop is a tough way to live. The greatest lesson in patience so far in this retraining experience hasn’t been with Jobber or the weather — it’s been learning to be patient with myself. And every day I’m beyond grateful for this good-minded Thoroughbred to show me the way.

Follow Jobber Bill’s progress into the western world right here on Horse Nation with plenty of updates to come! Jobber Bill also now has his own Facebook page where you can get more frequent updates. Go OTTBs, and go riding.