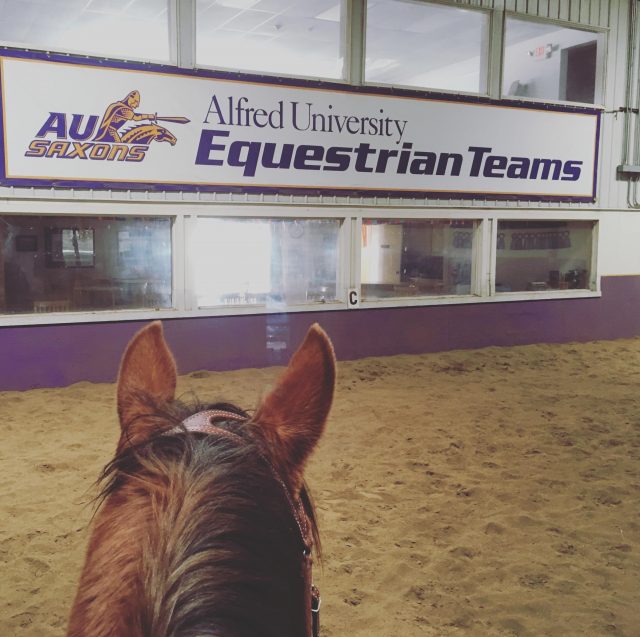 Kristen Kovatch and her OTTB Jobber Bill, after a winter of alternately struggling in snow or mud, finally surrendered to the weather and headed out for their first field trip together to an indoor facility. 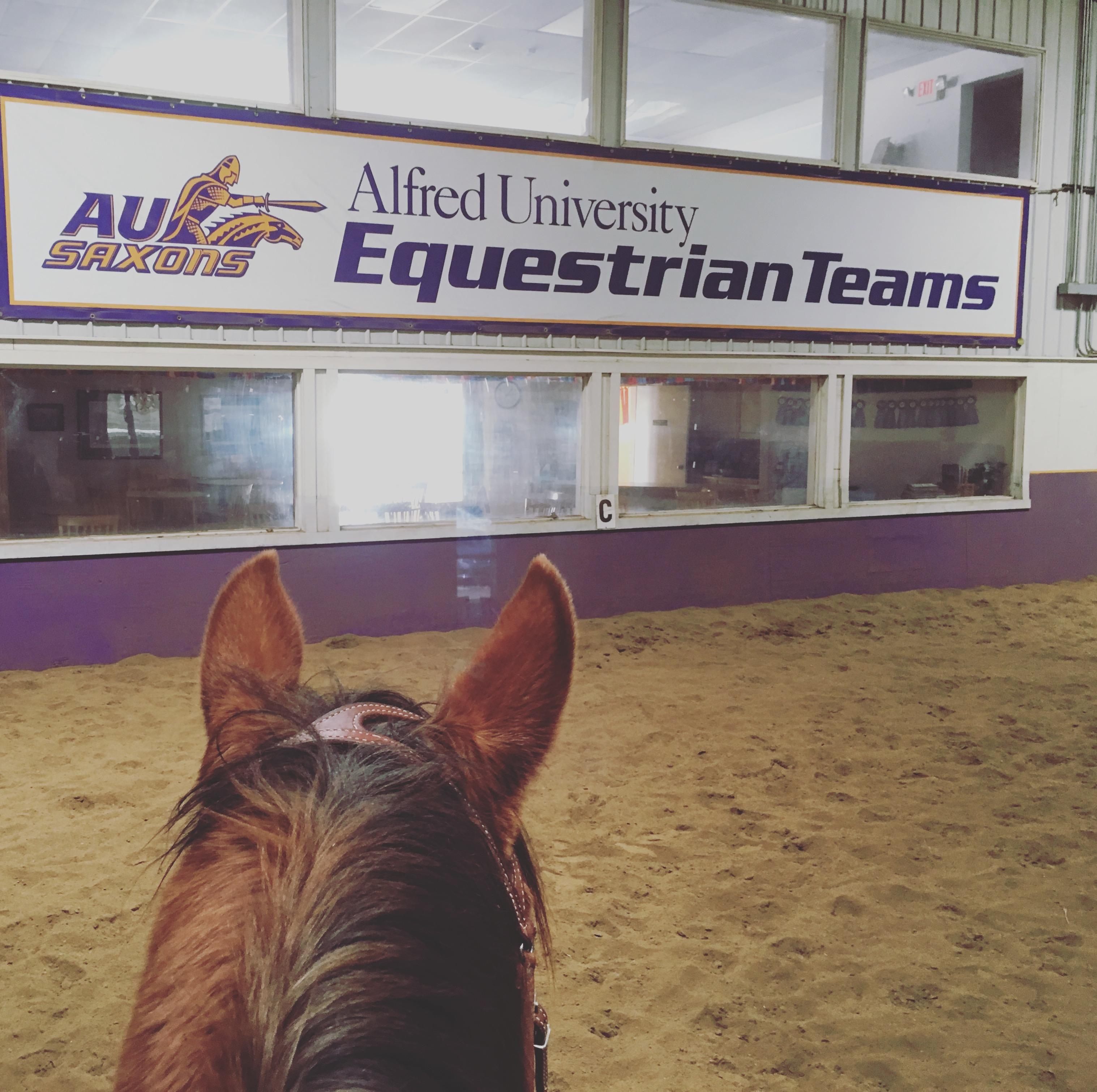 Once a Saxon, always a Saxon. Photo by Kristen Kovatch.

In reading training blogs, long Facebook posts and plenty of quotes from famous trainers taken out of their larger context, I’m well aware of how easily horsemen and horsewomen can get pretty evangelical about their methods and beliefs. It seems to be a unique phenomenon to the equestrian world, and I’ve sought to try to stay pretty self-aware to avoid that kind of social media soapboxing.

And I think one of the best ways to do that is to walk the walk, plus talk the talk. Which is why I finally folded in my long wait for springtime to get to my corner of New York state, quit preaching about the virtues of riding outside, loaded Jobber up and hit the road this past weekend for our first field trip, seeking the warmer climes of a heated indoor.

I’ve not been shy about the various gifts and benefits at my disposal due to riding on the farm without an arena of any kind — Jobber has certainly shown a ton of progress in his independence, his confidence in me as his rider and “person,” and his ability to navigate new challenges in setting, topography, weather conditions, wildlife, livestock and obstacles both natural and manmade. While there’s still plenty of work to be done and a seemingly endless array of things we can work on at home, I was also growing weary, and frankly a little bored, of wading through several inches of deep sucking mud in the close farm paddocks to get to a rolling riding pasture still covered in snow, topped by a harder crust of melted/refrozen ice.

While Jobber’s ultimate purpose is to be a working ranch horse here at home, I also want to have him schooled enough to be able show should I desire to do so… plus, there’s the Thoroughbred Makeover looming in October as well. One of the most often-repeated bits of advice in the TB Makeover trainers’ Facebook group is to get the horses exposed; haul them to shows and let them absorb that unique environment and atmosphere.

Well, schooling shows are starting to pepper the calendar ahead in April and May, but I didn’t want to leave much up to chance: how would Jobber handle showing off the trailer in a brand-new arena, working in company? Riding alone out in the snow has been doing wonders for his fitness, handiness and confidence, but this would be another thing entirely.

I called up my old mentor and coach Harry Hurd, who owns a property with a small indoor arena a few hours east of me; he had given me an open invitation to use his facility any time I wanted to get out of the snow for awhile. Upon checking the dates, however, he had a new idea: “Why don’t you come all the way to Alfred? I’ll get some of the team to come out and ride with you too.” 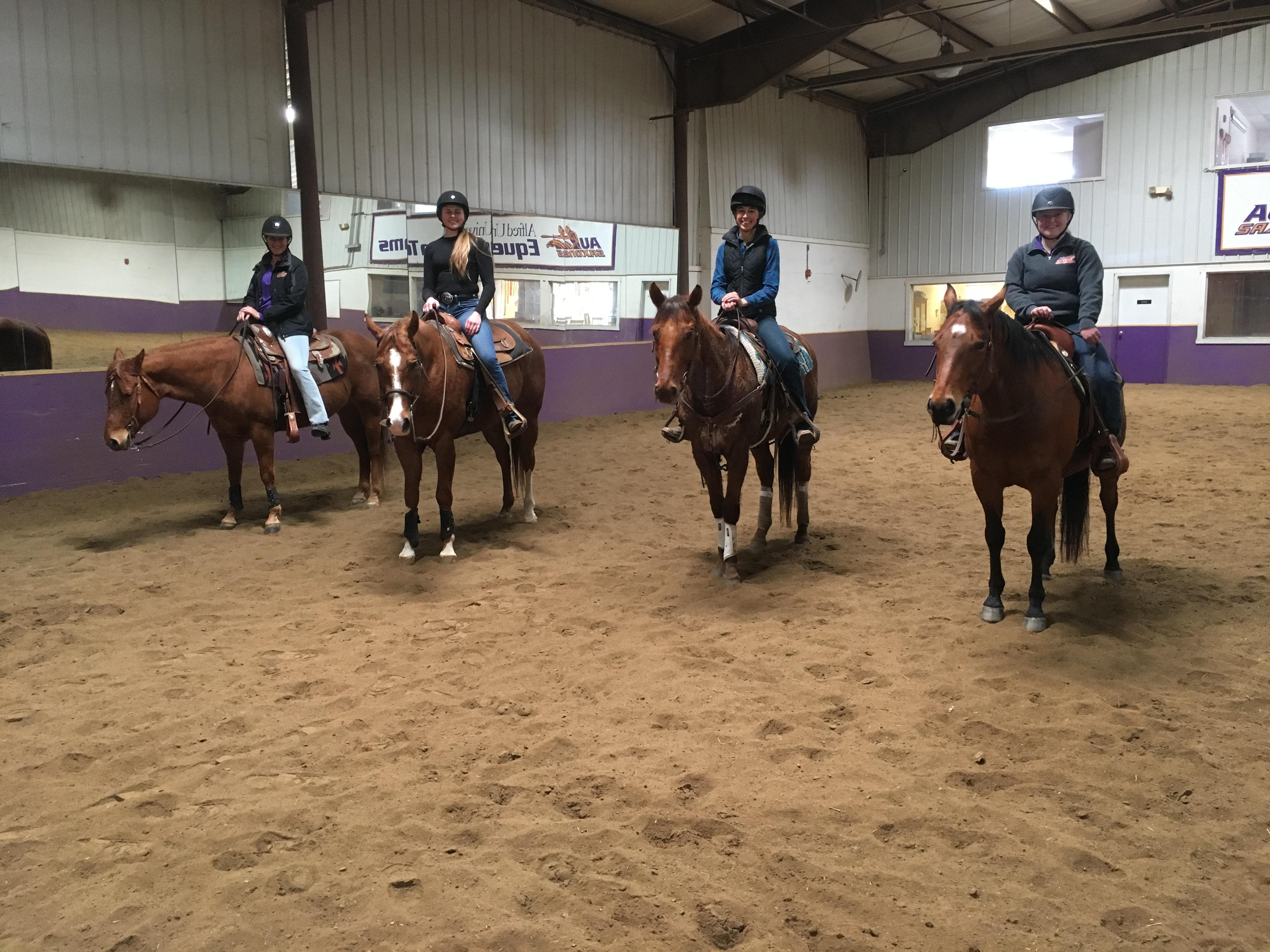 Me and Jobber with some of the AU equestrian team. Jobber, in his thick winter coat, got pretty sweat in this sultry heated indoor! Photo by Harry Hurd.

I hadn’t ridden at the Alfred University facility in several years, and stepping foot back into the heated facility was like a tropical treat. Jobber’s shaggy winter coat made him look a bit yak-ish next to the beautifully conditioned western horsemanship mounts, but as usual it was his good mind that was the standout star of the day: he took a good look at the full wall of mirrors, said hello to the stalled horses calling to him, and settled right down to business. Harry was nice enough to rustle up a few of his nationally-qualified IHSA riders to come hack with me, so Jobber got the full effects of schooling in a ring with horses going every which way, including a reiner whose spins he found totally engrossing.

Having the context of an indoor arena to gauge how far along we had come in training was way more helpful than I anticipated: Jobber was much more balanced in the turns and short sides than I expected, and we even managed to pick up our elusive left lead a few times.

The benefits to riding in an arena when you’ve only had wide-open pastures are huge: for an hour and a half, I didn’t have to worry about remembering where all the ditches or big rocks were, or if I was starting my upward transition while going downhill and towards home, or where I would end up if I were to try this, that or the other thing right now. Riders who feel like they need to do a lot of steering in an indoor arena need to come out and hit the fields with me for awhile; I felt like I was able to just coast around like I was in a hockey rink and focus more on how my horse was going rather than where my horse was going.

Unfortunately, I got more greedy for schooling the canter than I needed to be, forgetting that ultimate maxim of “end on a high note” and instead opted for “try that one more time.” Realistically, he’s not yet fit enough to do that much loping, especially in a warm ring with that much hair, and it was unfair of me to push him as much as I did. This horse has a brilliant mind and my number-one goal needs to be not taking advantage of his mental generosity.

See Jobber trot. Trot, Jobber, trot. Thanks to @elliemariewoz for the video!

Overall, I’m beyond pleased with how our field trip went: we hauled solo for a two-hour trip one way, rode pretty much right off the trailer after a handwalk to see the arena, worked in company, got a nice warm bath with shampoo for the first time in who knows how long, and then hauled back home again. For someone who doesn’t travel with her horse very often, this weekend was a great accomplishment not just for Jobber’s training, but for our relationship as a horse and rider combination and for me as a horsewoman to hit the road on her own.

The forecast for the next ten days has rain or snow predicted pretty much daily, but I’m finding that Jobber seems to process a lot of information between rides, coming back the next day or even a week later a better horse than when I put him up the last time. Even if this weekend’s field trip was the last ride for awhile, I’m confident that he’ll mull over what he experienced and be ready to get to work again when the sun finally shines our way.

Follow Jobber Bill’s progress into the western world right here on Horse Nation with plenty of updates to come! Jobber Bill also now has his own Facebook page where you can get more frequent updates. Go OTTBs, and go riding.