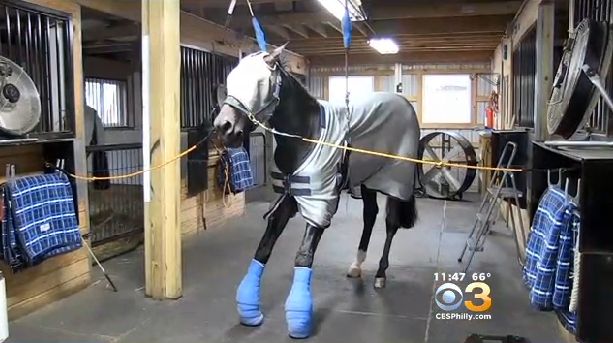 Monica Thors was indicted on nine felony counts of animal cruelty after her bizarre and horrifying abuses to Standardbreds at a New Jersey farm caused public outcry. Yesterday, a judge sentenced her to one year of probation.

Monica Thors’ story first broke in December 2014, sending the horse world reeling as accounts of her abuses to Standardbreds under her care at a New Jersey farm went public. Overweight, foundered horses were “rehabilitated” by Thors, who used nippers and power tools to remove large portions of hoof until some of the animals were completely crippled. Local news stations shared video shot in Thors’ barn of horses in slings with legs heavily bandaged and horses unable to rise to their feet.

The New Jersey SPCA reportedly had been building a case against Thors for over a year, but the horses were not removed from Thors’ care and charges were not filed until after the media broke this story to the wider public. Seven horses and a goat were seized from Thors on December 2, 2014 and two horses were euthanized within the 24 hours due to the extent of their inflicted injuries.

While there is no such thing as a “typical” animal abuse case, this particular story was particularly chilling, with Thors intentionally inflicting such torments on the horses in her care. (There has been plenty of speculation as to whether Thors is mentally ill and truly believes she was helping her horses, or whether she enjoys the actual torment of animals, but that is beyond the scope of this publication to address.) Equally baffling to how such abuse could continue for so long without intervention from law enforcement are the many twists and turns the case against Thors has taken since the horses were first seized.

Thors was formally indicted in June of 2015, charged with nine felony counts of animal cruelty. Thors plead not guilty in October of the same year, and filed civil lawsuits the following spring against fifteen individuals who had played various roles in the reporting and legal enforcement of her case so far.

Yesterday, what appears to be the final chapter in the Thors case — at least for now — came to a close in Gloucester County, where a judge sentenced Thors to one year of probation through a pre-trial intervention (PTI) program: first-time offenders indicted with non-violent crimes can get this option for probation.

“The state objected to PTI,” stated the Gloucester County District Attorney’s office. “However, the judge in this case overruled the state. The state then asked for two years of probation, and again was overruled by the judge for one year.”

In open court during legal proceedings, Thors wrote a letter to the court in which she stated that she felt no remorse for the death of her horses.