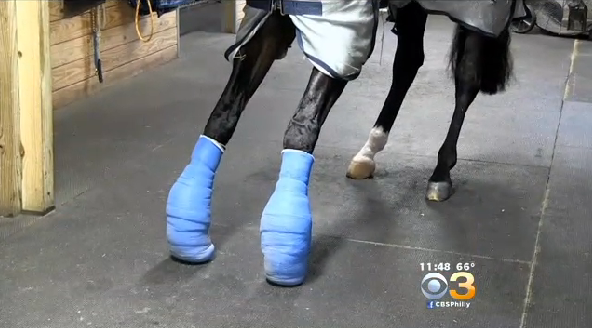 A harness-racing stable abuse case in New Jersey is starting to make national headlines, and it’s both extremely bizarre and heartbreakingly horrific.

Editor’s note: This is a disturbing story that may not be suitable for some readers.

After what looks like at least a full calendar year of reporting and investigating, the alleged horse abuse going on at a New Jersey farm may soon come to an end–but members of the equestrian and harness-racing community are wondering why on earth it’s taken so long. Social media has played a big role in raising awareness of the situation, but it’s also contributed to a little bit of confusion. I’ve tried to sift the facts from hyperbole, accusations and the no-doubt-well-intended animal crusaders’ posts promising to show up at the New Jersey farm and “save” the horses themselves. (While comments like this in abuse situations are likely intended to show support, they also tend to reveal how passion can blind logic, and can sometimes actually undo any good being done in legal action if they’re acted upon.)

The entire case boils down to one woman, Monica Thors, who owned 10 Standardbreds at one point–now, it’s unclear how many horses remain alive in her care. Thors got involved with the harness racing industry several years ago, purportedly first as a photographer, briefly as a driver, and then later in less defined roles as a trainer, rehabilitation worker, rescue worker, and perhaps breeder. Most of Thors’ horses never returned to the track; many never made it there in the first place. Piecing together photographs and videos from Thors’ Facebook page as well as the page “Stop Monica Thors,” it appears that Thors overfed her horses, which led to crippling and severe founder.

And this is where it gets REALLY weird–Thors seems to consider herself an expert in rehabilitating foundered horses by removing a large part of the hoof, using nippers and power tools. She reportedly cuts and sands the foot away until there’s essentially nothing left; horses have bled out or died from infections from being cut down to the bone. Photographs have emerged (on Thors’ own page) of the woman crouched down next to a horse lying on its side in a stall; Thors is beaming from ear to ear as she wields a Dremel tool. She’s posted videos to YouTube of her horses being lunged, visibly overweight and lame. Other horrifying videos have surfaced of Thors and a groom pushing/pulling a horse around a tiny barnyard; the horse is bandaged in vet-wrap up to its knees and is hobbling along on its fetlock joints. Photos show horses lying flat-out and bandaged in stalls, or suspended from the ceiling in slings. Everywhere, the horses are wrapped up to their knees, suggesting that they’ve experienced one of Thors’ own treatments. Thors reports that the horses are foundered from infection, allergy to shoe glue, and even that someone has mysteriously poisoned them.

As if this isn’t disturbing enough, this case was apparently reported in the spring of 2013 and the farm was inspected by members of the USDA and the NJ Racing Commission. The case was turned over to the NJ SPCA in September of 2013…but nothing more was heard about it until recently when media attention began to make a fuss. Reportedly, between the spring of 2013 and now, at least three horses died–“According to Hoyle” passed away at Mid-Atlantic veterinary hospital, “Caribbean Paradise” was put down by a Dr. Riddle in Maryland, and “Princess Grey” apparently died on the farm.

The NJSPCA is coming under fire from the public for the apparent delay in doing anything about this case. SPCA Captain Rick Yocum reportedly cited several reasons that no progress has been made, including no places for the rescued horses to go, not enough help to remove the horses from the property, and the overall complexity of the case. The Standardbred Breeders & Owners Association of New Jersey recently released a statement that it was aware of the abuses and was using “contacts in state government to push for actions.”

Watch this CBS Philadelphia story on the case and see for yourself:

It looks pretty obvious to me that these horses are suffering. With this increased media attention and public awareness, the NJ SPCA looks like it’s finally moving on this case–so we can hope that the remaining horses can be saved and that Monica Thors will get the help she clearly needs.

Update 1:53 p.m. EST: The Stop Monica Thors Facebook page is reporting that seven horses and one goat are now being removed from the property by the NJ SPCA and the Department of Agriculture. We will continue updating this post as the situation develops.

Update Wednesday, December 3 9:29 a.m. EST: The Stop Monica Thors Facebook page reports that of the seven horses that were on the property, five could walk under their own power and were removed first along with the goat. The two remaining horses in more critical condition were then removed to a clinic in Maryland where they are being treated. Details of their condition are not confirmed but they are said to be in bad shape and it’s unknown if they will recover. Of concern now are the reports that Thors is keeping several dogs and cats on the property; rumors are circulating that these animals too are being abused and social media is calling for further investigation by the SPCA. Abuse charges regarding the horses are likely to be filed soon.

Update 12/3 11:56 AM EST: Monica Thors has been charged with inflicting unnecessary cruelty upon a living creature and one count of failure to provide necessary care. If she is found guilty, she faces a maximum of a $2000 fine and up to 12 months in jail, or community service.

Update 12/4 11:44 AM EST: Click here for a follow-up story with updates on the horses, two of which were euthanized on Wednesday eventing.

CORRECTION: The USDA is incorrectly stated to have been involved in preliminary farm inspections. The inspecting agency was actually the NJ Department of Agriculture, which has no power to press charges, which is why the case was then turned over to the NJSPCA.