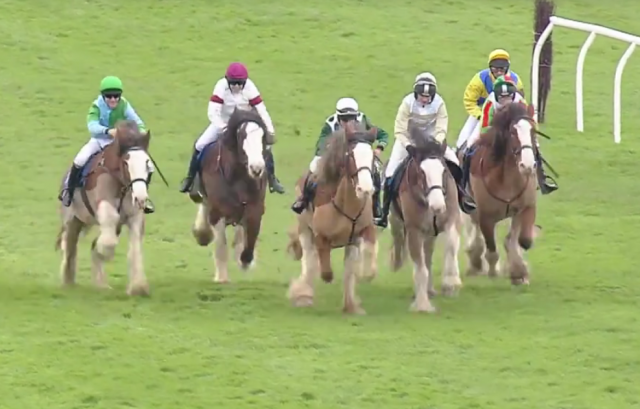 Welcome to the 2017 Horse Nation Readers’ Choice Awards! Vote for your favorite performance of the year, presented by SpectraVET Therapeutic Lasers.

For the SpectraVET 2017 Performance of the Year, we’re looking back at the six most-watched videos in our Wednesday column — which highlights a great recent performance from the show ring, race track or demonstration pen. Check them out one more time and then vote in the poll below! Our Readers’ Choice Award winners will be announced on Friday, December 29.

Published on July 5, 2017: “Isabell Werth of Germany is the world-ranked number one dressage rider, pretty much winning everything that’s not nailed down when she comes to town with her string of ethereal steeds. One thing that we love about Werth in particular is not just her winning ways, but her occasionally sassy choices in music for her Kur, or musical freestyle performances. How can you not like a lady that mixes a little Queen into her ride?”

Published on September 6, 2017: “Perhaps the best place to see Europe’s western athletes perform is at Americana in Augsburg, Germany, which is taking place right now: featuring not only its World Cups in reining, cutting and reined cow horse, Americana also features plenty of classes during the day for western enthusiasts as well as demonstrations, shopping and of course a country-western saloon. This particular performance from Americana really knocked our socks off: we introduce Diana Royer and her five-year-old mule Cosima, competing in the open ranch riding.”

Published on September 13, 2017: “Costume classes are always full of limitless entertainment — you never know what you will see next! The Youth Costume Class at American Miniature Horse Registry Nationals at the Tulsa Expo Center in Tulsa, Oklahoma was no exception to that rule. Check out these ADORABLE costumes and super tolerant horses!”

Published on October 18, 2017: “St. Jacques had already performed plenty that day, with an initial class of 257 riders narrowed down to just the top 25. Of those top 25, the best four were called back for additional testing in reverse order of merit, meaning that St. Jacques would be the last to perform. For the final test, the judges asked riders to perform without stirrups — a particular strength for St. Jacques. Watch her winning final test aboard Charisma, who himself won the Doris H. Clark Memorial Perpetual Trophy as Best Equitation Horse.”

Published on November 15, 2017: “This record-setting run from the AQHA World Show in Oklahoma City will blow you away: marking a combined score of 455, Sarah Dawson aboard Shiney Outlaw pretty much define what a good cow horse run should be all about. Sarah’s quiet riding allows the talent of Shiney Outlaw to be the focus, and her wise decisions in the cow portion of the run amplifies her horse’s abilities. Bonus: this video is narrated by AQHA judge Sandy Collier, so you can hear exactly why this run was so spectacular!”

Shiney Outlaw and Sarah Dawson get the gold in junior working cow horse, with a record-breaking score of 455!AQHA Judge Sandy Collier breaks down what made this explosive run golden globe-worthy. #AQHAWorldShow #GetThatGlobe Lucas Oil

Published on November 29, 2017: “If you always imagined heavy breeds such as the Clydesdale couldn’t possibly sustain anything quicker than a bit of a peppy canter for short distances, you should watch the annual Clydesdale Race, hosted by Exeter Racecourse on its Devon Day. The 2017 running took place last Sunday, with Syril (“Stobilee Scirroco”) piloted by Bryony Frost taking the win by a neck, followed by a photo for second. The Clydesdales only race about a quarter mile down the stretch at Exeter, and the annual “flying feathers” race is a benefit fundraiser for Devon’s air ambulance.”

A huge thank you to everyone who made the Adventure Clydesdale race so special today. Well done to winners Bryony Frost and Siryl, and to Nico De Boinville and Midge, Tom O'Brien and Frankie, Tom Scudamore and Solo, Nick Scholfield and Salvo and Lucy Gardner and Phil. Also to the bookmakers who supported today's race, and to Tim and Aileen Ware for bringing their gorgeous horses to Exeter.