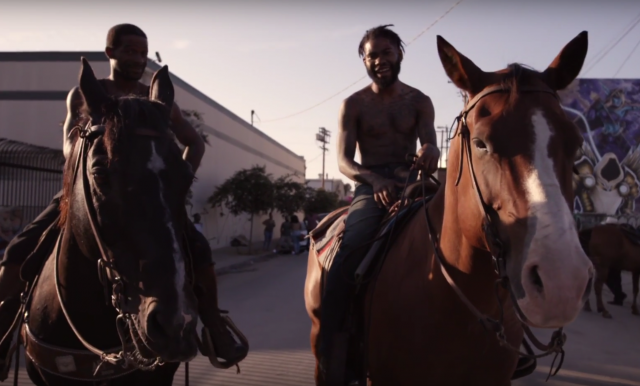 The city of Compton might not be the first place that comes to mind when you think of “horse country,” but the horses here are changing lives for the better and star in a new ad for Guinness.

Guinness has always pushed the advertising envelope with creative commercials, and its latest iteration of the “Made of More” campaign is designed to feature real people enriching the world around themselves. Today, the brewery giant dropped the “Compton Cowboys” campaign, featuring the real urban cowboys of the notorious city of Compton, south Los Angeles.

Compton might be best known according to mainstream media for gang violence and rough neighborhoods, but many individuals growing up in this urban setting are choosing positive alternatives. Especially in the neighborhood of Richland Farms, where many properties even within the city limits are zoned agricultural, residents are carving out tiny ranches where they can keep horses and ride on both the city streets and dirt paths.

Compton is the homeplace of the well-known Compton Junior Posse, a youth riding program and outreach that teaches local youth the ins and outs of horse care and riding, teaching critical life skills like empathy and responsibility while providing an alternative to gang culture and violence.

Guinness also shared a number of more in-depth interviews and conversations with individual “Compton cowboys,” who describe life in the city and the love they have for their horses, many of whom are rescues. The resounding theme is the last line of the 90-second spot shown above: “Did I save the horse? Or did the horse save me?”

These are the same emotions we all feel, whether we’re riding out of an urban ranch or over rolling green hills in the countryside: freedom. A sense of peace. A step away from our everyday reality. All who love horses are united by these feelings, no matter what walks of life we all tread daily.

We salute Guinness for sharing the story of the Compton cowboys. Go riding.