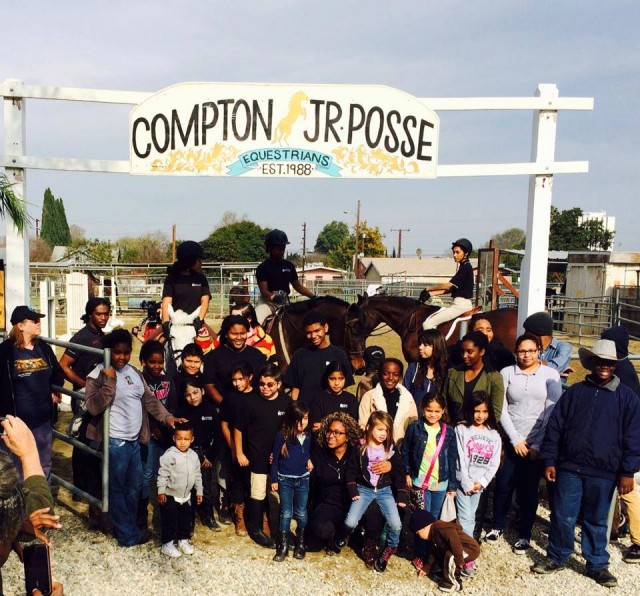 Each Friday, Horse Nation teams up with Ovation Riding to spotlight an individual or organization doing good work in the horse world. This week we honor Mayisha Akbar and the Compton Junior Posse.

“Keeping kids ON horses and OFF the streets”

The Jr. Posse Youth Equestrian Program, also known as the Compton Junior Posse, has been featured on several local California news stations and is starting to gain more recognition in the horse world for the good work that they do. The program recently was featured as a subject in a California documentary series called Project Believe, spotlighting those who believe in something bigger than themselves. This description accurately portrays Mayisha Akbar, the founder and executive director of the Jr. Posse Youth Equestrian Program, who kindly took the time to tell us her story.

It’s no secret that horses have an uncanny power in their very presence to captivate, inspire and motivate us to be better than ourselves, to empathize and care for another being while finding new strengths we never knew we had. Such were the discoveries of Mayisha Akbar as a child, and something that she wanted her own children to experience. She found a horse property for sale in the city of Compton in California and moved her three children there to give them the opportunity to grow up with horses.

Soon her kids were coming home with their friends, attracted by the horses. Mayisha learned that some of those children were in need of some help, someone to encourage them to stay in school, work hard at their academics. It wasn’t long before she was finding herself filling that need, shepherding what started as a bunch of kids hanging around her house into a group of dedicated students who had made a deal to study hard in return for riding the horses. The Compton Junior Posse was born.

Mayisha’s degree is in education, so developing young people into students with the tools to succeed is her ultimate goal. The riding program and equine science curriculum are just parts of what she calls her leadership development program: since its beginnings, the Compton Junior Posse has transformed into a far-reaching web that allows interested students to develop public speaking skills, learn basic business skills, raise a garden, work with other community groups to learn about ecology and the environment, and even travel internationally to serve as ambassadors for the program.

But it’s the horses that draw the students in first and foremost, and it’s the horses that teach the first and most basic lessons: the importance of quiet, how to respect another living being, how to develop a work ethic. Mayisha states that “the horses are instrumental in a way that the students don’t get at school. Horses bring something to everybody.” The horses are the foundation of the program that develops the neighborhood’s youth into leaders who have the skills to give back to their community, a city that was once known as one of the most dangerous in the country.

Xavier and Pauli looking great over fences in their first show together.

The Compton Junior Posse has attracted international attention, but has also benefitted from supporters closer to home, notably show jumping champion and Olympic gold medalist Will Simpson who serves on the Posse’s board of directors. Thanks to other benevolent supporters, the Compton Junior Posse is able to help graduating seniors to college with financial assistance, the culmination of years of hard work in grade school learning the skills necessary to do great things in the world.

For over twenty years, the Compton Junior Posse was entirely volunteer-run and funded by Mayisha herself. The program now runs as a registered non-profit; current plans are to restructure as a business to allow Mayisha to retire as director in the next three years. By any account, this horsewoman can retire safe in the knowledge that she has changed lives for hundreds of youth in her community and inspired countless others to start programs of their own. That’s not a bad legacy to hang your hat on.

Also, be sure to check out this ABC TV segment with Elex Michaelson.