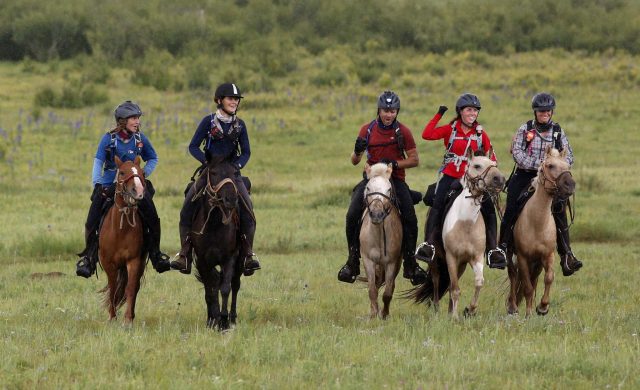 The first finishers completed the 2017 Mongol Derby (in record-setting time!) and more followed suit today; our Leslie Wylie’s “traveling group” is projected to finish tomorrow with just three legs left in the journey of a thousand kilometers.

As the sun sets on Day 8 on the steppe, let’s just remember that not only have this lot been riding hard for a full week and then some, they’ve also been dealing with mixed weather conditions, staying in gers hosted by nomadic herdsmen and eating food provided by their gracious hosts. We can only imagine on Day 8 how inviting this lovely little lake at the finish line must be:

What to do with your sweaty pony post Derby? It's not a bloody holiday camp people! GK Hustlerrr WC Dumpling pretend otherwise pic.twitter.com/rseaYQzfBX

Read on for the day’s full report.

As Ed Fernon, Barry Armitage and Jakkie Mellet — the top three finishers from yesterday — presumably lounged around victory camp, perhaps sleeping off the celebratory vodka they had knocked back the night prior — the race continued across the steppe for the rest of the field.

Warren Sutton and Will Comiskey had only the last leg to finish after their overnight at Urtuu 27, and they rolled across the finish line together in what seems to be becoming a new Mongol Derby tradition, taking the tied finish for fourth place around 11:10 AM (Mongolia time). This was Will’s second Mongol Derby completion, and he “blessed” his final mount with a bit of mare’s milk:

One for the Dingo fans. He's done it again! 1000kms safe as houses on a series feral Mongolian mounts. Mares milk blessing for last steed pic.twitter.com/BJ9G51gNAe

Warren Sutton reportedly forgot to turn on his tracking device, so the tracking map still shows him as being at Urtuu 27. We are assured that he did, in fact, complete the Mongol Derby.

What does finishing feel like? Something like this: MP RHW GC BW JW in the final furlong. Our warmest salutes from the Ops Room – glorious pic.twitter.com/e08uQ3tW76

The final riders of the day to finish were Roberta McLeod at 5:30 PM for eleventh place and Jen Cook at 8:18 PM for twelfth. Rebecca Pumphrey turned up at the finish at 9:30 PM, after getting lost in the dark for the last three kilometers: she earned herself a three-hour technical penalty that could possibly bump her to lower than 13th depending on when the first riders finish tomorrow. Regardless of final placing, we’re sure she’s happy to be across the finish line. Congratulations to all the day’s finishers!

While the dangers of the Mongol Derby certainly aren’t diminished just by proximity to the finish line — riders can still contend with hazards like marmot holes, unpredictable and semi-wild mounts, spooky things like cars popping right up out of nowhere and the various injuries and illnesses that everyone has been battling from Day 1 — we’re perceiving from our desks on the other side of the world that the focus now is not just on surviving each day on the steppe but on finishing. Spirits are high among the back pack: high enough that a few riders got into some fun shenanigans along the trail.

…riding like cowboys and Indians – shooting pretend guns and bows and arrows. Jimbo also using his horse line as lasso to catch hostages"

(BW, aka Brooke Wharton, already finished earlier in the day, so we’re assuming this last tweet is a typo that should be LW.)

Well, if there’s one person we trust to take things to the next level, it’s Leslie. So look out, Lucy and Jimbo. You’ve got LW on your tail now.

Leslie and the rest of her new trail friends appear to have made it to Urtuu 25 for the night, giving them three legs to ride tomorrow and a projection to finish. We’re sending them all our best thoughts for a safe final day of riding and hoping for a lovely victory party at the finish line for all riders tomorrow!

In an impressive display of grit and tenacity, some of the Bloodwagon riders — riders who retired earlier in the Derby due to injury or illness — are reportedly “itching to ride again.” Medical staff have been dispatched to assess Jane Boxhall, Rick Helson and Liv Wood to see if they can be cleared to ride again, at least giving them the opportunity to ride across the finish line. We’ll keep you updated if we learn more!

Annette Kriller reportedly lost her horse between Urtuus 24 and 25 and has been transported back to 24. Organizers are hoping to find her horse and her tack in the morning; she may need to pull an LW and ride a leg without stirrups. Fingers crossed for AK!