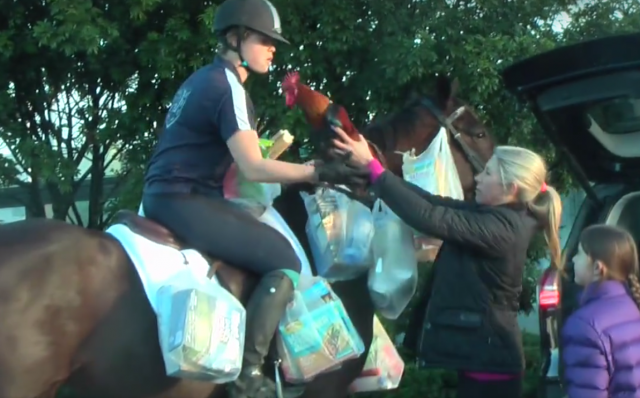 Remember the world’s most tolerant sales horse of all time that we introduced you to in early June? Pumba is back with yet more saintly tolerance for would-be buyers’ absurd requests.

We’re not strangers to the process of selling a horse: no matter how clearly you spell things out in the ad, potential buyers will still make some curious inquiries. (Case in point: poor reader Brittany’s list of actual questions and comments from her perspective buyers.)

In early June, we introduced you to a superstar in the making: a lovely mare named Pumba, offered for sale by the good folks at Brookby Heights International of New Zealand. Dirt bikes, children on trampolines, people popping suddenly out of windows and airborne hula-hoops: whatever they throw at Pumba (sometimes literally) she handles with nary a blink.

But according to Brookby Heights International (seriously, guys, call us some time — let’s hang out) that apparently still wasn’t enough for interested buyers:

“A potential buyer asked me, if Pumba would load in a straight load float (trailer) and does she like llamas? Well I did not know the answer to either of those but due to time constraints we thought we’d test both out together. I’m sorry to say that llamas were in short supply, but we told Pumba this was a llama, so technically…”

But no, it didn’t stop there either.

Another potential buyer for Pumba said to me, “so she’s ok with kids and llamas but what does she think of chickens and is she scared of plastic bags?” So I thought, well why would they ask that? Maybe they need her to help with the groceries… (No horses, roosters or people of Papakura were harmed during the making of this video…. incredibly.)

Thank you to the lovely staff of Countdown Papakura, Mcdonald’s Papakura and KFC Papakura and the beautiful people of “Kura” for humouring us when the idiots from Brookby Heights turned up on their doorstep.

Oh, yes, that is a rider jumping Pumba, wearing a chicken suit, riding with one hand, while carrying a rooster.

Shockingly, somehow Pumba is STILL for sale, despite this viral series of ridiculous videos that’s made her an internet sensation. Not only is she really good for all of these arbitrary tasks, but girl’s got some hops, too — she’s schooling 1.30m and is competing in eventing, show jumping and pure dressage with a little time dabbling in the hunters on the side.

Seriously, someone needs to purchase this sweet thing, and tell them Horse Nation sent you.