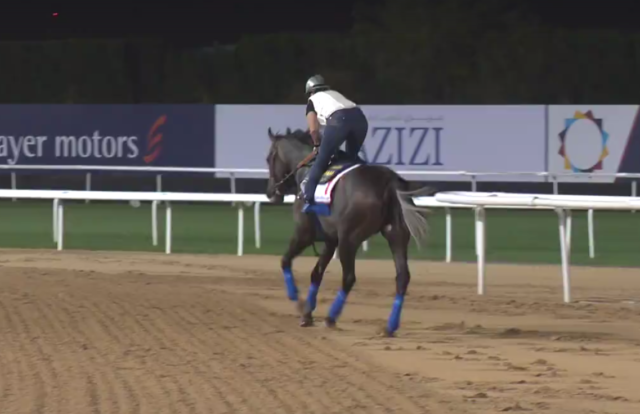 We’ve got the who, what, when and where for Saturday’s $10 million Dubai World Cup and a preview of the field, topped by American superstar Arrogate.

The Dubai World Cup, until January’s running of the Pegasus World Cup, was the richest horse race in the world offering a purse of $10 million. The race traditionally draws horses from all over the world and this year’s field is no different, with an international field coming from the USA, Ireland, Chile, Great Britain and Japan.

Who: A full field of fourteen, ranging in age from four to seven, colts, geldings and one mare, representing United States, Ireland, Chile, Great Britain and Japan.

How to watch: TVG Network will be broadcasting all day, starting at 7:45 AM with the first race of the day. NBCSN will broadcast several races including the Dubai World Cup live, starting at 10:30 AM until 1:30 PM.

California Chrome won the 2016 running of the Dubai World Cup, helping him earn the distinction of richest North American racehorse in the world. However, if Arrogate should pull off a win tomorrow, he will take over that title.

Arrogate, the darling of the 2016 Travers and Breeders’ Cup Classic as well as the inaugural running of the Pegasus World Cup, is the heavy favorite for Dubai. The gray son of Tapit has won in commanding style in his recent stakes victories, shipping from the East Coast to the West Coast; he earned the World’s Best Racehorse title as well as the Eclipse Award for Champion Three-Year-Old Male. Arrogate drew post position 9.

Coming out of post 1 is Kentucky-bred Apollo Kentucky, based in Japan. With eight wins in 19 starts, including most recently the Grade I Tokyo Daishoten, Apollo Kentucky seems to be overlooked by many USA-based handicappers and it will be interesting to see how he fares in Dubai.

Long River will break from post 2. This US-bred seven-year-old by A.P. Indy has raced exclusively at Meydan since 2015, an also-ran in the 2015 Dubai World Cup. He’s been strong recently, winning Round 3 of the Al Maktoum Challenge in his last start, but he is not expected to pose much of a threat to Arrogate.

Out of post 3, Japan-bred Gold Dream has not raced since mid-February when he won the Grade I February Stakes in Tokyo. Not much seems to be known about this “dark horse” so we will wait to see him perform on Saturday!

Post 4 will be a familiar name to regular Horse Nation readers — our unsung hero of Japan Lani is back on our radars. We first fell in love with this international weirdo when he was on the 2015 Triple Crown trail (read Lorraine Jackson’s hilarious open love letter here) and while he hasn’t had the greatest career since then, failing to show up against foes he will face tomorrow, we’re still hopeful that Lani will make a strong showing.

Gun Runner will break from post 5; this USA-bred colt sat out the Pegasus World Cup due to an EHV-1 outbreak at his home base in Louisiana. He did mark a commanding win in the Grade I Clark Handicap in the fall and won the Grade III Razorback Handicap at the end of February, and is widely hailed as the only horse with a real chance of beating Arrogate. Gun Runner is typically quick out of the gate while Arrogate breaks a bit slower, so it’s possible that Gun Runner could get the jump from the start.

The Great Britain-based Move Up comes out of post 6. A lightly-raced four-year-old, Move Up has won some handicaps and stakes in England; he did not fare as well in his most recent start at Meydan, failing to place in the Round 3 of the Al Maktoum Challenge.

Awardee, in post 7, is another Japan-based runner with a respectable record. He finished second to Apollo Kentucky most recently in the Grade I Tokyo Daishoten. With Grade I wins and places in a light 2016 record, Awardee should come into Dubai fighting fit.

The sole mare in the field, Furia Cruzada breaks from post 8. Bred in Chile, Furia Cruzada is a bit of a globe-trotter with a racing career spanning South America and Europe as well as recent starts at Meydan, including a win in the Al Maktoum Challenge Round 2 and a third place in Round 3. She’s not viewed as much of a threat to the front runners but she may not yet be taken seriously. We’re excited to see her performance.

Keen Ice from post 10 is a warhorse, best known perhaps for beating American Pharoah in the Travers Stakes (the same race that jettisoned Arrogate to superstardom). He was an also-ran in last year’s Dubai World Cup and since then has posted a third place in the Breeders’ Cup Classic and a second in the Grade III Harlan’s Holiday as well as a run in the Pegasus World Cup.

Neolithic in post 11 popped onto the mainstream racing fans’ radars with a third place finish in the Pegasus World Cup. This horse doesn’t have a lot of graded stakes experience, with most of his wins coming in allowance races. He may be in over his head in Dubai or he may surprise everyone!

Out of post 12 comes Hopportunity, a stablemate to Arrogate under Bob Baffert. This horse has never quite been in the limelight but boasts a long and accomplished career with multiple Grade I wins, places and shows. While it’s unlikely he can catch Arrogate, he at least deserves credit for a warhorse record — he also finished third in the 2016 edition of this race and has won since then.

Irish-bred Special Fighter comes out of post 13 with only his second start since the 2016 World Cup, where he finished fourth. He did finish second in the Al Maktoum Challenge Round 3 behind Long River and just ahead of Furia Cruzada; perhaps this six-year-old is a sleeper waiting to strike.

Rounding out the field is Irish-bred Mubtaahij out of post 14. This colt debuted in Great Britain, broke his maiden at Meydan and then traveled to the US to make a bid in the Kentucky Derby and Belmont Stakes. All of his career wins have taken place at Meydan and he finished second last year in the World Cup to California Chrome. His most recent race was a second place finish in the Curlin Handicap at Meydan.

We’ll have a race recap this weekend, so keep it locked on Horse Nation.