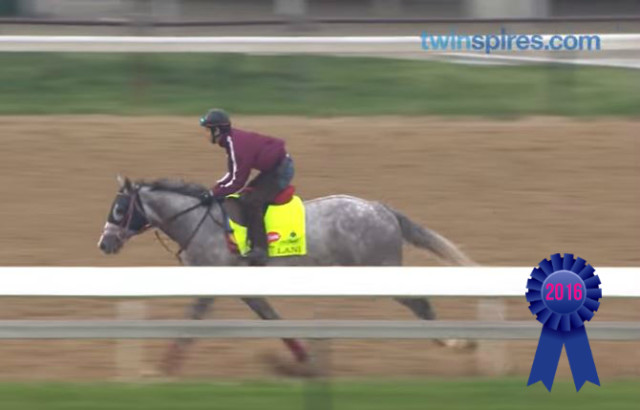 The Preakness has come and gone, but I’m still feeling the euphoria. Not from the triumphant upset of a commanding performance by Exaggerator, or from the awe of watching 11 powerful horses slog through the mud in historic conditions, no, not even from the epic excitement that is watching The Running of the Portapotties in the infield. No, I’m riding the high of the Tokyo Drifter, The Harajuku Girl Gone Horsey, the Sushi Laced with Acid that you are, my little gray friend. You Crazy.

On the outset, your life looked totally normal. You were born in Kentucky like most other Triple Crown contenders, the son of champion Tapit, and I assume you drank milk and ate bluegrass just like everyone else. Or did you? Because after that, things got weird.

You got shipped out to Japan, which isn’t altogether unusual with the burgeoning racing and betting universe that exists there. You had some predictable starts, as well as some less predictable ones, like the time you won two races six days apart at the end of your 2-year-old year.

Then your connections were like, “I know! What if we ship him to America, but we stop on the way (NOT REALLY ON THE WAY AT ALL) in Dubai and catch a race on the World Cup card, and THEN go to America!” and everyone thought this was a great idea. But since you’re the weirdest horse in the world, you didn’t think this was weird at all, and went ahead and won the United Arab Emirates Derby.

You probably had a shot at the Kentucky Derby too, except in this case that whole “weirdest horse ever” thing meant you had a rambunctiously terrible start of breaking slow, bumping into people, and then taking the widest, longest route to the finish in Derby History.

I like to think that someone was holding a Mint Julep out for you on the outside rail like they do at marathons, and you just really needed one. Who could blame you? We all need a drink on a big day. So it didn’t work out. But I held on for hope in the Preakness.

You arrived Thursday morning before the Preakness literally mere hours from the mandatory cutoff time, and I heaved a sigh of relief, and hoped I would get a peek at you, but was instead greeted with the sight of completely closed barn doors, as your connections said “The isolation keeps him calm.”

The weirdness continued as the media sneaked your adoring fans little tidbits. As is tradition with Japanese racing, you would take extended workouts of long gallops with intermittent long sprints. Okay, not that weird. Except apparently you were getting, pretty, uh, excited about your workouts. Sometimes just fresh and rambunctious, and other times . . . well, a different kind of excited. The kind of excited where poor photographers have to photoshop things before they send them on to the NBC Affiliates.

Then the day of your final morning workout, you said, “You know what? If I’m going to be the weirdest horse in the race, wouldn’t the weirdest thing be to just NOT race? Let’s try it. Imma not race today.” And you literally refused to work out the day before the Preakness, and the clouds parted and the bird sang for your weirdness. Your connections were completely unsure if they loaded you in the starting gate the next day if you would run or maybe saunter off and get your hair did. The suspense!

Finally the race. You skipped the post parade and went straight for the gate so you could keep your mojo, where you then immediately refused to enter said gate, and tried to murder some people.

So the race starts, you immediately swipe left and bump into the future winner as he leaves you in the dust in what has to be the most gangly, slow, awkward start by a horse in a stakes race in the 21st century. If James Franco were a jockey and rode Seth Rogen like a horse, and they left the starting gate of the Preakness, I think their first furlong sprint would have been faster and more majestic.

After that, it all gets a little hazy because A) it was raining on the lens of every Preakness camera and B) for the first minute of the race, you are so far behind that literally the camera cannot capture you in the same frame as the other horses. So did you have a good trip? I don’t know. You were dead last right up until you weren’t.

Still in last, but now he’s in the shot! Screenshot via YouTube

You don’t make a move until the final turn, and then you CAREEN down the stretch, weaving between horses and nearly running people over, left and right and left and right and had that race been 1/16 of a mile longer, I guarantee that your crazy little broken head would have been in the very damn front of the pack, because YOU CRAZY, Lani. Your final placing in the Preakness belies what you nearly accomplished, in spite of being a horse who should probably be institutionalized and living in a horsey straight jacket.

Like so many other misunderstood artists of our time, people fail to grasp your work and are lost in the crazy of it. Like Kanye West trying to tweet the creator of Facebook, on, you know, Twitter: It doesn’t make sense, but we guarantee Mark Zuckerberg heard about it.

I’ve heard what you had to say, Lani, and I’m rooting for you in the Belmont, with all your crazy antics. Inbox me a Tweet on the Instagram, yo.