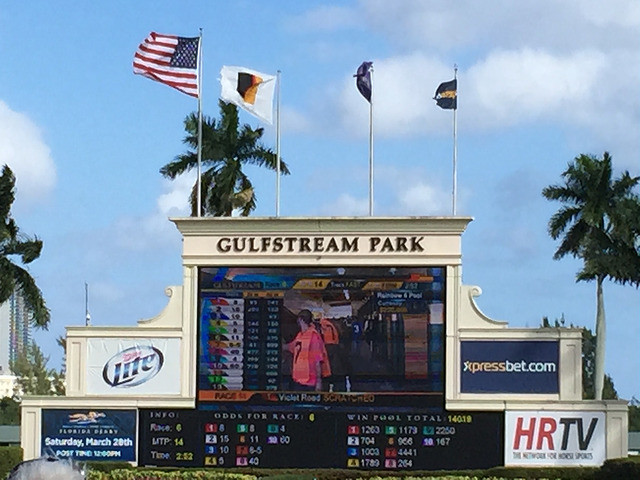 Without a negative swab, the horse cannot ship to Florida.

Gulfstream Park, home of the Pegasus World Cup where Gun Runner was hoping to make a stand. Flickr/Claudia Brauer/CC

The high-profile story of Gun Runner is raising interesting discussions about how horsemen deal with outbreaks, quarantine and testing for the contagious disease EHV-1. We first reported on the outbreak of EHV-1 at Fair Grounds race track of Louisiana in early January, when multiple barns were placed under quarantine and the entire facility was under a shipping ban.

The good news: the facility-wide quarantine has been lifted as of January 21 thanks to no further reports of EHV-1 symptoms or diagnoses. One horse who suffered from neurological symptoms and was properly isolated and treated is recovering. Individual barn quarantines are still in effect, but overall the outbreak is believed to have been contained at Fair Grounds. Interested readers can track the entire outbreak as reported by the Louisiana Department of Agriculture & Forestry.

Gun Runner, a Grade I winner and hopeful for the Pegasus World Cup to be held this Saturday, January 28 at Florida’s Gulfstream Park, has been stabled at Fair Grounds under trainer Steve Asmussen. Though Gun Runner resides in Asmussen’s main barn, which has not reported a single positive test for EHV-1 throughout the entire quarantine period, the shipping ban rightfully and correctly prevented travel and the horse was “grounded” at Fair Grounds. Though still able to train, the horse was unable to ship. Fans and connections of the horse kept their fingers crossed that the quarantine would be lifted in time for Gun Runner to ship — and for a few days, it looked like it would all be possible.

The horse’s owners Winchell Thoroughbreds and Three Chimneys Farm announced last week that they had struck a deal with Mick Ruis, the owner of one of the Pegasus World Cup racing slots — Ruis originally planned to run his own War Envoy for a chance at a piece of the $12 million purse. One important factor of this new deal was the quarantine being lifted in time, allowing the horse to travel.

Florida officials stated that the horse would be allowed to ship to Gulfstream as long as he returned negative tests for EHV-1 via blood testing and a nasal swab. According to co-owner Ron Winchell, the blood test has returned negative, but based on advice from his private veterinarian that the nasal swab test has a 15% chance of a false positive, he is refusing that test. Without a negative nasal swab, Florida and Gulfstream Park officials are standing firm: no negative test, no Gun Runner. Unless the owners change their minds by today’s draw (to be broadcast live at 4:30 PM today) the horse will not be running.

The Stronach Group, which operates Gulfstream as well as many other tracks and was the brainchild behind the Pegasus World Cup, sent its medical director Dr. Robert O’Neill to Fair Grounds to assist with the quarantine and paperwork surrounding Gun Runner. Reportedly, Dr. O’Neill was not confident enough in the quarantine protocols employed at Fair Grounds to be confident in anything less than negative tests.

While we could not find research to confirm that the 15% false positive statement is accurate, we did find literature from UC Davis Veterinary Medicine stating that “even given the sophistication of our current molecular testing capabilities, the interpretation of PCR viral detection for EHV-1 should be done only in the context of the presenting clinical signs for disease in the horse being tested […] There is simply not sufficient information yet acquired to justify or recommend control measures or quarantine procedures for horses testing positive for EHV-1 in the absence of clinical signs of disease.” You can read the full report on EHV-1 testing here.

Further complicating the decision is the current quarantine stabling setup at Fair Grounds — in the event that Gun Runner did test positive for EHV-1 via a nasal swab, quarantine horses are stabled in a tent barn on concrete. Gun Runner’s connections were unwilling to potentially place their horse on concrete for 30 days for the sake of entering a horse race, thinking instead of his future career and complications that could arise from such a situation.

It’s the opinion of the author that both parties are in the right in this situation — Gulfstream and Florida officials have the right to require negative tests to protect the horses already at the facility and prevent further spread of the disease, and Gun Runner’s connections appear to have made a decision in the horse’s best interest for the future. While an entry by this horse into the Pegasus would have been another exciting factor in the race, it’s not worth the risk on either side.

Mick Ruis will likely run his own War Envoy. In additional Pegasus World Cup news, Reddam Racing is likely selecting Semper Fortis over Ralis, as the former has been working more impressively in recent training.