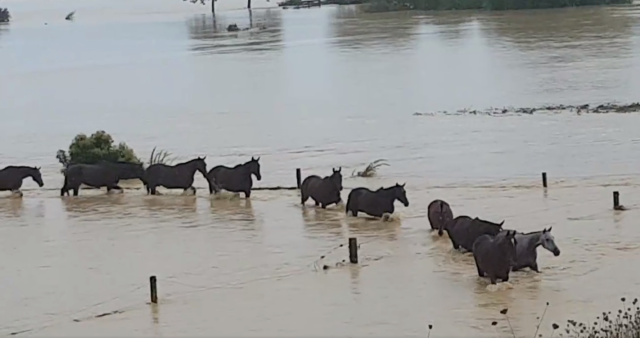 Rapidly-rising floodwaters in New Zealand trapped a herd of polo ponies on what used to be high ground — fortunately, the clever herd found its way to safety.

I’m going to go ahead and say it: it’s only March but this has been an insane year for extreme weather already. From intense flooding in California to prairie fires in the Midwest, it seems like the weather swings from one extreme to the next depending on where you are. Other parts of the world aren’t exempt, either — parts of New Zealand have seen unusual flooding as well.

Hololio Farm and Polo Club of Clevedon did expect some flooding, but nothing like what they ultimately weathered — floodwaters flowing over areas that were usually high and dry. The water rose so quickly that horses at Hololio became stranded in their pastures: fortunately, this group of polo ponies found its own way to safety!

Fortunately, none of these horses were injured in their brief ordeal, though the farm did sustain damage to fences as well as other equipment that was stuck underwater. Other farmers in the area were not so lucky, losing some livestock to the flood.

Our hearts go out to those who suffered losses in this wild weather. We’re glad that for these horses, all is well that ends well.