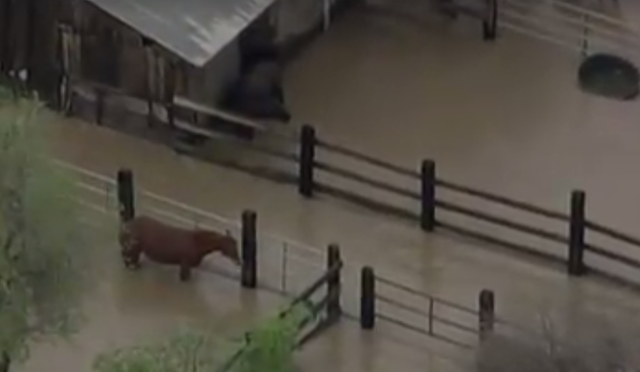 Flood waters are receding in California — for now.

Historic conditions in northern California have driven already-strained creeks and reservoirs well past the flood stage, including the Anderson Dam and Coyote Creek nearby and in the city of San Jose. At Anderson Dam, the reservoir water level was reported to still be over two feet over the spillway as of Wednesday, February 22. Coyote Creek overflowed its banks and broke the levee, reaching a historic crest of 13.6 feet (10 feet is considered the flood stage). While the skies are staying dry for now, more rain is forecast for the weekend.

Fourteen thousand households in San Jose are under mandatory evacuation with another ten thousand on voluntary evacuation, with local residents reporting that the water rose very quickly. Many only had enough warning and time to gather their families and pets and flee, leaving behind all of their possessions.

Residents are being urged to stay out of the evacuation zone even as waters start to recede, as the flood water is contaminated with fuel, oil and possibly sewage. It is impossible to see obstacles in the murky water, which further hampers accessibility and safety.

Conflicting news reports further muddied the story, as some major sources stated that the horses had been moved to higher ground while other sources stated that the horses were still stranded in deep water without access to feed or clean water. Horse lovers from all over the world offered plenty of suggestions from accessing the farm via boat to airlifting the horses out; meanwhile, farm staff and horse owners were working tirelessly on the scene within their limitations to battle conditions for the sake of the horses.

Live video was posted on Wednesday, February 22 from the farm as crews worked to help the horses:

Later updates at the end of the day:

In summary, all of the horses are now out of standing flood water and are being fed; generally, the horses appear to be in good health and stable. According to these videos, plans are underway to move the horses off the property before Saturday’s predicted rain.

Rescue attempts were greatly hampered by conditions — fast-moving floodwaters made for dangerous conditions to navigate by boat. Murky water makes it impossible to see hidden obstacles under the surface. Horse owners reported their thanks to volunteers who came forward with boats to help.

Plenty of “armchair quarterbacking” on social media placed blame on horse owners for not moving their horses from the path of flood waters and for not accessing their horses quick enough to make sure they were safe. It’s important to remember that this is historic flooding — waters reportedly rose so fast that area residents only had time to jump in the car and leave, with many needing to be rescued from their homes by boat. San Jose Mayor Sam Liccardo described this flood as exceeding the 100-year expectation — sometimes, even with the best-laid plans, emergencies will change everything.

Our thoughts are with the horse owners and residents of San Jose facing historic and dangerous flooding. To the best of our knowledge, there are no funding sites currently set up to aid the horse owners affected.

For more resources about emergency planning for barns, check out our in-depth article here.