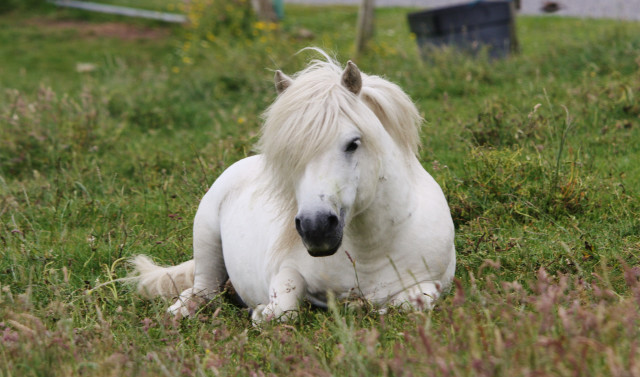 In addition to people squealing “PONIEEEEEEEES!”

That said, ponyhood does not seem to come without its drawbacks.

1. Everyone always saying some variation on “AWWWWWW lookit how cute he is!”

Yes. We get it. Ponies are CUTE, no matter what shape, size, color or variety we’re looking at, from the puffiest, fluffiest little pot-bellied Shetland to the 10-mover currently nailing his distances in the large pony hunter ring. But if you were a pony, wouldn’t it be nice every now and then to have something else complimented? Like, I dunno, say your intelligence, your sense of humor, creativity… surely it’s exhausting to have everyone speak to you in a baby voice over and over again just because you happen to be under 14.2.

Okay, so the larges will probably be exempt from this, but has anyone ever seen a small pony in a regular horse stall? Talk about a pain in the neck — the little guy can’t see over the door, he probably has a hard time reaching a regularly-hung bucket and he has to deal with people peering down at him all day long. Sure, he has enough room in there to run hot laps if he really wanted to, but all he ever really wanted was a room with a view.

Remember Pedro, the pony whose children built him a periscope? Think of Pedro.

Pedro, likely cursing whatever goofball put him in this stall in the first place. Screen shot via YouTube.

Whether this is a legitimate summer camp in which you are teaching a budding young equestrian how to take the first steps down the long path, or its darker cousin, the camp where children learn “horsemanship basics” by doing things like braiding your mane and tarring you in sparkly finger paints and ribbons, pony camp really sounds like a small equine’s personal hell. This illustration from The Idea of Order sums it up nicely.

Unless your humans are nice enough to turn you out only with other ponies your own size, most of the time you’re going to be wishing your legs were a few inches longer so that when everyone plays a nice game of crazy chase you weren’t stuck in the back eating everyone else’s dirt clods. Now, I’ve met a few large pony individuals who could give the horses a run for their money when they really got cooking, but those littler guys don’t stand a chance.

5. Your show name is something inordinately stupid-cute, like “Pillow Talk” or “Mr. Chuckles.”

True story: our sister site Jumper Nation combed through the USEF lists and pulled up some of the weirdest, cutesiest, most-likely-to-have-been-named-by-an-actual-ten-year-old hunter pony names in existence. We present to you: Weebiscuit, Polly Pocket, Theodorable, Rico Suave, Al Capony and Brittney Spurrs.

Meanwhile, your little adorable short-stirrup investment actually wishes he were called Dark Lord Sauron of Mordor, but tragically he has no way to express this to you.

6. You can’t reach anything.

How on earth are you supposed to get into trouble by pulling blankets off the wall or knocking things down in the wash rack or halter-tagging with your horse friend until you managed to chew through said halter and toss it over the fence if you were born just two hands too short to reach anything? All of your horse friends can reach over the fence to nibble the apple tree but you have to wait for windfalls. Good thing you’re very good at wiggling under fences.

Sporthorse buddy complaining that his six pounds of grain with four different supplements and half a bale aren’t enough to get him from meal to meal? Count your blessing, buddy, because in pony land they measure your grain with a yogurt cup accompanied by a single flake of hay. No matter how many times you’ve tried to tear down that big sign on the stall door that says “No cookies, please!” they seem to plaster it right back up again. Founder, schmounder –it’s not your fault you were designed to live on air in the world’s harshest conditions and now live in comfy equine suburbia. Wouldn’t it be great if you were just allowed to eat what you want to in the quantities you so rightly deserve?

Actual footage of every pony everywhere.

Go ponies. The world wouldn’t be the same without you.