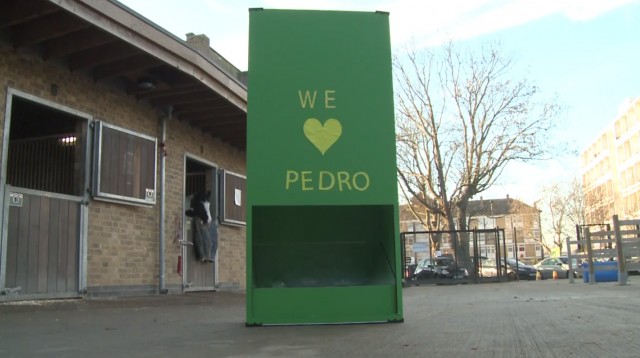 It’s called the ‘Pedroscope,’ and allows the barn’s Shetland to see out into the stable yard. Yep, it’s real.

Most of the time, it totally rocks to be a pony: They’re cute. They’re furry. They’re typically ridden by wee tots who are usually not strong enough yet to actually make the pony do anything. They get lots of treats and brushing and attention. Ponyhood seems to be a pretty plush gig… well, except for the fact that ponies are small, and when you’re just a tiny pony living in a big horse world, things can get a little tough. Welcome to Pedro’s life.

Pedro is a Shetland pony living at the Ebony Horse Club in Brixton, South London, a community riding stable that improves the lives of disadvantaged youth in its neighborhood. Unfortunately for Pedro, the barn is designed (you know, like most barns) to accommodate much larger horses, so Pedro has a hard time seeing over his stall door, which can really get a pony pretty down.

Ebony Horse Club saw an opportunity to let its riders get their thinking caps on, and they sat down to brainstorm ways they could help Pedro see into the stable yard. Some of the suggestions were pretty off-the-wall, such as getting Pedro some high-heeled shoes, or having Pedro stand on the back of another horse, or suspending Pedro in the air from hot-air balloons. But one idea was just crazy enough to work: a pony periscope.

Print & Cut Ltd, based in Stockport, heard about the idea and offered to design and build the periscope, which the barn kids promptly named the ‘Pedroscope.’ With some help from his two-legged friends, Pedro looks like he’s learned how to view the world through the periscope and can now keep up with what’s going on in the stable yard.

Ebony Horse Club is proud of the riders’ efforts to create a solution, but knows that this is really only a temporary fix–the periscope can only be used when someone is in the barn, and they would like to ultimately build Pedro a pony-sized stall just for him. The stable is accepting donations towards the construction of a new stall, with the side bonus that Pedro’s stall can then be used to house a new horse for the community to enjoy.

Check out this video of the Pedroscope in action:

If you’re interested in donating to help build Pedro a stall, check out the Ebony Horse Club’s website!