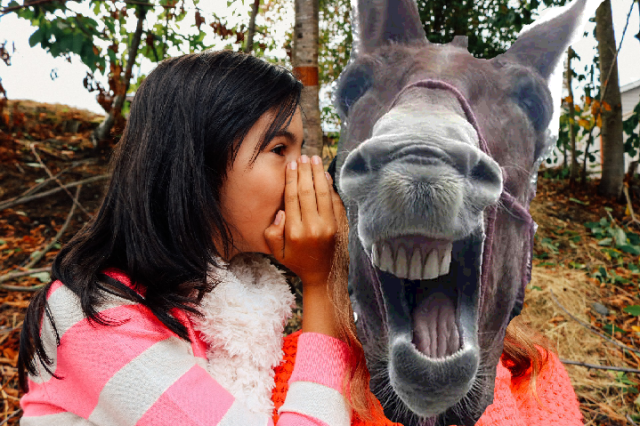 Maria Wachter has been around the Horse Nation block now for awhile — and she certainly knows how to get people talking. She puts together a brief list of some of the most common drama-starting topics in the horse world.

I’ve been a writer for Horse Nation for about a year and a half. I freaking love this job. I get to write and I get paid to write! How cool is that?!

I have found out over my 18-month stint with Horse Nation that out of all the articles I have written for them, the ones that get the most views are either funny articles/lists (10 reasons why equestrians do this or that, etc) or pieces that invite discussion. People love that stuff!

Sometimes the comments are even more amusing than the articles themselves. If you don’t believe me, read the satirical post Highly Scientific Report: The Budweiser Clydesdales Are Fake. Then read the comments. Oh my, was that a blast to read! I also love the fact that half the comments were from people who didn’t even read the article. They just “assumed.”

My informative articles, on the other hand, don’t get read much at all. I get it, we LOVE drama and we LOVE to laugh and we LOVE to stir the pot. Look at the nightly news, for example: they stay in business because of all the drama they create. It also seems that people who say “I can’t stand drama” tend to be the most dramatic of them all.

Here’s the truth: social media has become a great tool for people to get their drama fix.

For example, if you post a picture of you riding your horse on the trails and get a through-the-ears shot, you’ll get a couple of likes and a couple of nice comments. If you put a pic up of yourself riding in the wrong bit/saddle/tack; riding without a helmet; riding a slightly chubby/slightly skinny horse; or being a little overweight yourself, your post will go viral with plenty of out-of-control comments.

Here are a few things people love to go off on:

I could go on and on.

Basically if it’s on social media, it’s fair game. You better come prepared with your big girl panties and a bucket of popcorn.

So, readers of Horse Nation, now that the winter months are upon us, most people will be house bound instead of being outside doing stuff to keep them busy. You will come across a lot more drama in these next couple of months –horse people just can’t stay away from it.

Snuggle up, grab your favorite snack and indulge in your own reality show type of drama right on your own social media of choice. Shoot, bust out the liquor if your day is especially boring. You can deny it… but you know you love it.