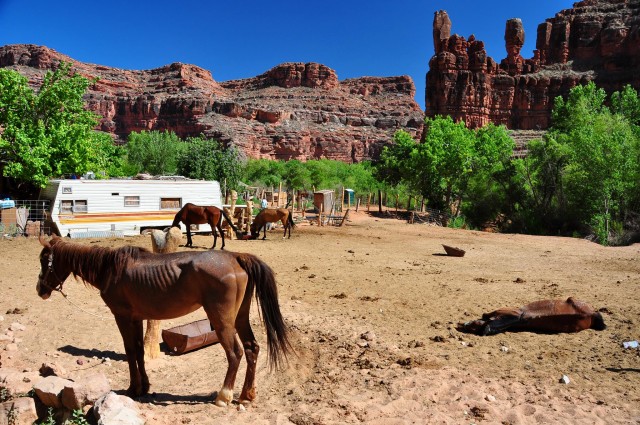 Susan Ash, the founder of Stop Animal Violence or SAVE, reports to Horse Nation with an update on the plight of abused pack animals at Havasu Falls in Arizona.

We first reported on animal abuse and the situation in Havasu, Arizona in April of 2016 with an interview with Susan Ash of Stop Animal Violence or SAVE. Ash works tirelessly to effect change for the horses and mules who pack tourists’ luggage and outfitters’ equipment in and out of the remote canyon: she reported in April that the animals were regularly underweight, suffered from open sores due to ill-fitting tack and injuries due to overwork.

Little had been done to ease the animals’ suffering as Havasu is part of the Havasupai Reservation and many visitors believed that the tribe would self-police the abusers. Only this year, however, have concerned individuals finally banded together to raise awareness and pressure the tribe to make changes. Many major and well-known outfitters continue to utilize the pack service, while others have found other methods to shuttle their gear.

We reached out to Susan Ash last week for an update. She reports:

“The situation in Havasu, specifically on the Havasupai Reservation, in Grand Canyon remains critical in the face of continued horrible abuse of pack animals. There has been no progress made in the vital areas of need that SAVE identified months ago. These needs include water and feed and shade available to all pack animals at [Hualapai Hilltop, the jumping-off point for visitors traveling into the canyon] and regular inspection of all animals being used to carry loads, with any animal not rated healthy enough to pack being removed from the line.”

Packers are continuing to use underweight and injured animals, reportedly beating their horses to encourage more speed up and down the nine-mile trail. There’s a distinct lack of veterinary and farrier care. “Again, continued abuses and neglect remain the normal situation despite what tribal leaders recently claim as new ‘improvements.’ We know this because we continue to receive many eyewitness reports, often with pictures, confirming this,” Ash adds.

“The Tribe suspended third-party trek outfitters from operating for about seven weeks this summer. They managed to come up with a new licensing agreement stipulating a new $7,500 fee for third party outfitters. Nothing in this new document or in any other document addresses the needs of the horses, mules and donkeys belonging to the Havasupai Tribe. They have had approximately 40 years to do so.”

We reported on the suspension of operations in July; at the time, advocates for the horses believed that this suspension would result in improved conditions based on a statement released by the Havasupai. However, it appears that nothing has changed for the horses whatsoever.

“Companies like Wildland Trekking, Pygmy Guides and others have resumed their operations,” Ash reports. “They have put out no statements or policies to address their complicity in this abuse nor have they responded to written requests to shed any light on how they plan to operate with more humane regard for the health and welfare of these animals. SAVE members believe that sustained public pressure is the only way to succeed with convincing the tribe that they should enforce existing laws and operate humanely and outfitters insist on this, as is done on the South Rim of Grand Canyon.

“On the other hand, REI Adventures and National Geographic Adventures have stopped offering trips to Havasu altogether. We believe it is due to the negative publicity we have been able to generate. But neither company has stated that it has anything to do with how these animals are treated. We are glad they are no longer offering these trips but remain disappointed that they will not take a stand on behalf of the animals’ treatment by some tribal members.”

To help support Susan Ash and SAVE in the battle to achieve better conditions for the horses of Havasu, please visit the SAVE Havasupai Horses Facebook page for more information.