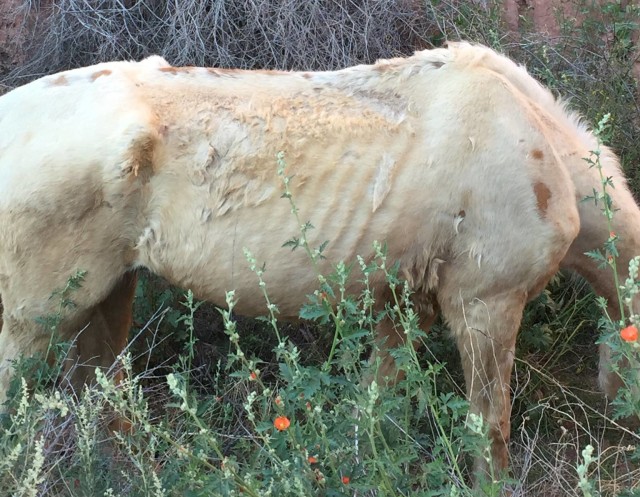 One of the most remote and beautiful rugged locations in the United States is also home to heartbreaking and horrific equine abuse. In an HN exclusive, we spoke with Susan Ash of the SAVE Foundation to learn more.

Off the well-trafficked main paths around the Grand Canyon, the adventurous can find countless tales waiting to be told down the roads less traveled, sights and sounds and experiences that the majority of the several-million annual visitors to the canyon will never see from the paved road or the parking lots. On the way to Havasu Falls, however, scenes of horrific equine abuse provide a stark contrast to one of the most beautiful corners of the country — for decades, individuals among the Havasupai people have used and abused horses and mules as part of the tourist industry, and people are finally speaking up.

One of the last true geographically remote areas left in the lower 48 states, visitors must trek about four hours by car to Hualapai Hilltop, the jumping-off point for trail travel. From here, it’s still eight miles of rugged trail down into the canyon itself, which visitors can travel either on foot or by horseback (a helicopter service is also available on a limited basis and does not run every day or in certain weather conditions). The trail includes a 2000-foot descent into the canyon, marked by intense switchbacks and steep climbs, in order to access the village on the canyon floor. All of this is part of the Havasupai nation territory.

For fifty to sixty years, visitors reported that the horses used for transporting tourists and baggage in and out of the canyon were grossly underweight, suffered from saddle sores and other injuries and were sometimes ruthlessly beaten for such behavior as collapsing on the trail. Many visitors assumed that because the horses were part of the sovereign nation, little could be done to change their fate; anyone who did try to lodge a formal complaint through tribal government eventually ran into dead-ends, which seems only to have emboldened the abusers who had no punishment to fear.

To this day, tourists have reported horrible scenes of blatant cruelty — a man kicking a downed horse in the head hard enough that the horse lost its eye; horses with all of their bones showing still being made to hustle up and down the canyon trail; horses standing in the hot sun with no shelter, feed or water at Hualapai Hilltop.

Mysteriously, the tribe takes in an estimated $4 to $5 million in revenue from tourism to the canyon — and yet most of the village lives in abject poverty. Tracing the money to whatever mysterious place it ends up was well beyond the scope of this article, so we’ll leave that for another day — the fact remains that little money is being turned around to care for, or even appropriately feed, these horses.

Because sovereign territory is governed by the tribe and council, the Havasupai can choose to look the other way — until now. In a landmark case, the federal government has stepped in to finally enforce animal abuse laws in Havasu, with one individual recently arrested and charged with two felonies and two misdemeanors. His horses were seized and are slowly rehabilitating.

One of the seized Havasu horses. Photo by Jojo Decker.

One group in particular has vowed to take a stance and to not back down. We spoke with Susan Ash of the Stop Animal ViolencE (SAVE) Foundation.

“To the best of my knowledge, we’re the first real organized group to take a stand against the conditions,” stated Ash. The SAVE Foundation has called for a boycott of the horse pack service by visitors to Havasu, hitting the offenders in the pocketbook. Viral petitions and Facebook posts from the Foundation are starting to gain traction.

Despite criticism on social media that nothing was being done to save the individual horses in the moment, Ash believes that the Foundation’s tactics will bring about change that will not only improve the horses’ lives for the better but also prevent this situation from happening ever again. Ash and the Foundation are taking a stance that they believe will affect permanent change for the better.

Numerous organizations and veterinarians are volunteering their time to travel to the village, treat individual injured horses and then head out of town — but as Ash describes, “if a horse isn’t being fed properly, how can you assume that the owner is going to treat it with the antibiotics you left with him? How long are those stitches in that wound going to hold when the horse is made to work immediately after?” While these volunteer measures are certainly admirable, and we give those individuals the utmost respect for what they are doing, they’re not going to create any change in the situation at all — they’re simply a temporary bandage for an individual horse or two.

The situation is compounded by the fact that the Havasu people can choose to bar any groups or individuals from returning to sovereign territory — therefore, many of these relief organizations choose not to speak out about the conditions in the canyon, operating on the likely-accurate belief that doing so will result in their permanent ban from the reservation, therefore preventing them from aiding any horses at all.

“We don’t want to malign the tribe,” Ash stresses. “But this abuse is not an anomaly — it’s not just one or two doing this, it’s widespread. There are people down in the village there that are angry about it but can’t do anything to change the situation.”

“People lose the right to be left alone when they do bad things.”

I asked Ash to describe the perfect situation as a result of her efforts — the goal of the Foundation. It’s important to note Ash and the Foundation are not campaigning to take the horses away or end the use of equines in the tourism industry at Havasu Falls. Horses are still the main form of transportation for residents themselves to travel in and out of the canyon (even the mail arrives by mule). The Foundation hopes to assist the tribe should they demonstrate a sincere and sustained effort to hold the worst abusers accountable, through seizing their horses and enforcing standards of care for all packers.

The Foundation’s goals include:

“We’re not going anywhere,” Ash states. “We’re here to stay until changes are made. We’re not backing down.”