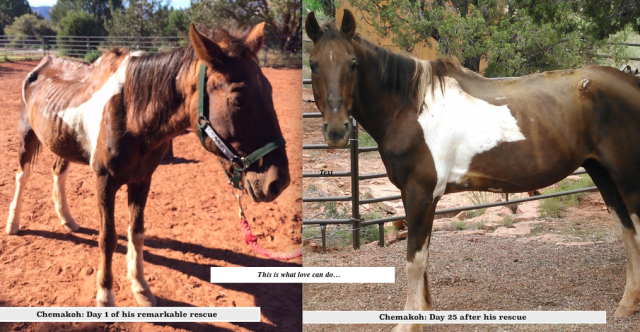 In a follow-up to our April story about the horrific abuses and conditions suffered by pack horses at Havasu Falls, we’re pleased to report today that the Havasupai tribe is taking positive steps to break the cycle.

One of the seized Havasu horses. Photo by Jojo Decker.

Havasu Falls, one of the most beautiful and remote places in the United States, lies within Havasupai tribal territory and requires an intense hike in and out of a section of the Grand Canyon to access. The Havasupai have run a pack service for tourists and commercial ventures alike, using horses to ferry packs and supplies up and down the canyon. Scenes of horrific horse abuse had become the new normal in Havasu: tourists reported for the past fifty-plus years that many of these pack horses were regularly injured, underweight and lame, and some were even dying by the side of the trail.

Stop Animal ViolencE, or SAVE, spearheaded by Susan Ash, has been working tirelessly for months to raise awareness of the plight of the Havasu horses and pressure authorities to take action. This is a unique case: while the federal government always has the ability to act in tribal matters, it has never actually stepped in before to take action. However, in early April, four horses were seized and the owner Leland Joe has been barred from owning horses for three years in addition to probation. Many other horses under other owners are still suffering.

The Havasupai tribal leadership has previously done nothing to curb animal abuses or punish those guilty: horses are still made to travel the canyon heavily-loaded in ill-fitting tack, with apparent saddle rubs and girth sores, in addition to many being grossly underweight and lame. Horses stand for hours in the hot sun at the top of the canyon with no free access to water.

However, news has come at last that the tribe is taking steps to address the animal abuse in the canyon: over the weekend, it was reported that a tribe animal control officer has paid an individual specifically to fill and maintain a stock tank for the horses at the top of the canyon, as well as giving permission for advocacy groups to bring in additional feed.

Tribal council also announced that commercial trips for companies such as REI and Pygmy were suspended until the council could closely investigate the abuses to horses.

Susan Ash of SAVE is hopeful that these are the first of many steps towards improving the working conditions and lives of the horses of Havasu. While there is still a long way to go to accomplish the organization’s list of goals for the horses, the Havasupai are moving in a positive direction.