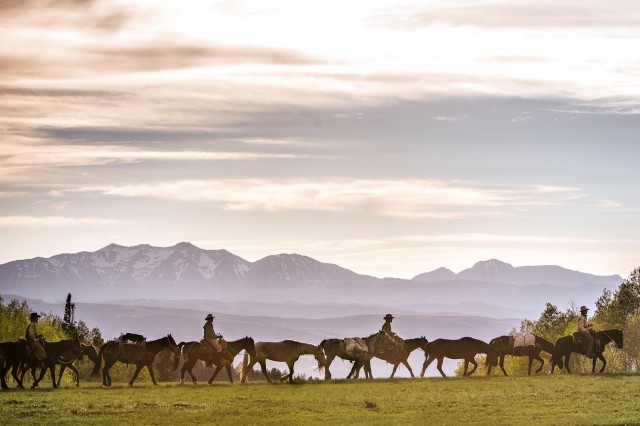 This new documentary follows four friends packing 16 mustangs from Mexico to Canada. We caught up with project mastermind Ben Masters to learn more.

In all of us there’s a little bit of the wild. Maybe that’s what draws us to horses in the first place. In some, that instinctual calling to open spaces is strong, even overpowering: they have to wander, explore, quench that thirst for clean air and the wild rugged places that still exist in this world. Ben Masters is one of these people. He’s also a horseman, packer, conservationist and visionary. But the best word to describe him might simply be adventurer. That hunger for adventure and open range is what drove him to gather three of his friends, an entire production crew, and sixteen unbroke mustangs for a three thousand mile journey in some of the wildest and most remote places in America.

Masters’ goals in taking this amazing journey were threefold: he wanted to champion the mustang and its incredible gifts for use as a pleasure horse in a mountain setting. He wanted to remind the public that not only does all of this open land exist for all of us to share, but it’s possible for anyone to go out there and see it. And for that wild side of himself and his three friends, he was simply seeking the adventure of a lifetime.

“We did the trip because the time was right in our lives and we wanted a big adventure. I’m so glad we did it,” Masters commented. “We wanted the best horses we could use–what better horses could you use than the mustangs that were out there? They’re perfect for that. One of the reasons we did it is because the mustang situation going on right now is just ridiculous. We wanted to show people that they can be used, and they’re perfect for the endeavor of pleasure riding.”

Tom and his C-Star. Photo courtesy of Unbranded.

The mustang situation to which Masters refers is a hotly-contested issue as open and unprotected spaces in the American West are diminishing and suitable habitat for these horses gets smaller almost daily. Thousands of mustangs are held at government facilities, glutting a market that can only adopt so many. For horsemen with the knowledge, patience and desire to unlock the mustang’s gifts, they are a fiercely loyal, versatile and surefooted partner for almost anything they attempt.

Masters and his three trip partners Ben Thamer, Jonny Fitzsimmons and Tom Glover sorted through over 300 horses to find their string. Lanny Leach and Jerry Jones, professional trainers involved in the Mustang Heritage Foundation, helped with the first 30 days of training through the Trainer Incentive Program. The team then took their string to the Mexican border starting in Arizona and worked their way north, traveling through Arizona, Utah, Idaho, Wyoming and Montana with a total of sixteen horses (and a burro, also adopted from the wild.) In some sections, the party traveled up to 200 miles without crossing a public road. Astoundingly, 95% of their trip traveled publicly-owned land. Masters quoted a statistic for me that there are two acres of public land for every citizen of the United States. “Many people have no idea of the opportunities that we have.”

That’s one of the messages that Masters hopes viewers take away from Unbranded. “People always think ‘wow, I wish I could do that!’ I’ve done it twice. I’m not really a horse whisperer and I’m not that talented–but it’s not that hard. A lot of people really want to do something like that, but don’t. I hope that anyone on the fence would see our project and think they could do that too. You could do that trip in 4-5 months with $8000, if you were careful. It would be the best money you ever spent.”

A lot of the project was funded through a Kickstarter campaign. The original Kickstarter video paints a broader picture of the mustang situation as well as illustrates the kind of drive that sent these four friends into the wilderness:

In addition to the documentary, Masters and the crew have published an Unbranded book with Texas A&M University Press, partially a how-to and partially a collection of short stories from along the trail. The book is broken into seven sections, starting with the training process of the mustangs followed up by a chapter per state. The final section is a reflection on the entire journey. “Whoever lived the experience the closest wrote about it.” Masters mentioned that the section dedicated to explaining the plight of the mustang has received good reviews for telling all sides of the situation in detail.

Masters pointed out that the most important part of the entire venture was the crew that came along for the ride: “The guys that made our vantage successful was our cameramen: they made the journey themselves and they also had to film it. It was twice as hard on them as it was on us. They didn’t know how to ride horses when they started, and by the end they were seasoned hands. It was amazing to see the transformation.”

This is one documentary that we can’t wait to see on the big screen. For information on the film, book and a collection of incredible photography available for purchase, see the Unbranded website. You can also follow the project on Facebook, Twitter and Instagram.