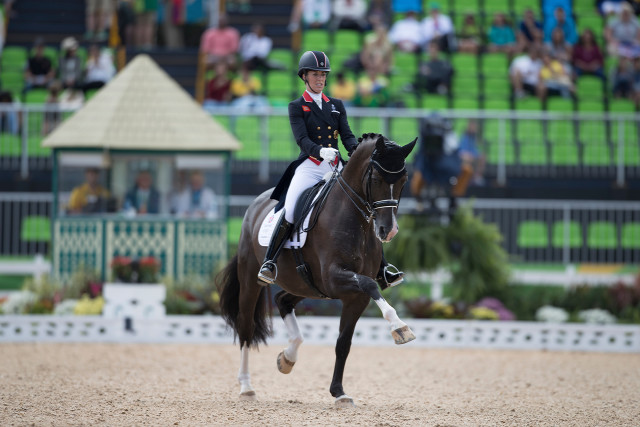 What news, leaderboard shifts and headlines did you miss today in the second day of Grand Prix dressage? You could Google it for hours … or you could come hang out with us for your pint-sized recap of the day’s events.

Surprising absolutely no one but still hypnotizing the entire equestrian complex into silence for their performance, defending champions and world record holders Charlotte Dujardin and Valegro shot straight to the top of the standings today with a 85.07%. That performance moves Great Britain into the silver medal position going into the Grand Prix Special, with team medals awarded tomorrow.

Germany still holds a commanding lead with three scores over 80% (Dorotee Schneider, Kristina Bröring-Sprehe and Isabell Werth), and the USA has moved into bronze position after today’s performances. The USA’s Laura Graves and Verdades had a particularly standout performance and are currently sitting in fifth individually with a 78.07%.

The top six teams and riders with the next best 8 scores will return for tomorrow’s Grand Prix Special, and team medals will be awarded as well.

And here are the top eight teams, with tomorrow’s Special qualifiers highlighted:

Despite Dujardin and Valegro taking an individual lead, Germany holds strong in gold medal position. However, there were plenty of changes in silver and bronze: Great Britain moved into silver and the USA slid up into bronze. Tomorrow’s Grand Prix Special will settle team standings for good. The Netherlands, Denmark and Sweden also qualify for the Grand Prix Special, as well as a handful of individuals, all of which are listed here. [Germany, Britain and U.S. Hold Podium Positions After Rio Grand Prix]

Dujardin, Laura Graves and Isabell Werth might be the day’s big individual headliners, but … Chronicle of the Horse also gathered some fun (and slightly outrageous) facts about the other individuals competing at the Olympics. Did you know that Anders Dahl paints his toes with the Danish national flag? Or that Steffen Peters and Michael Phelps may have started a small bromance during the Opening Ceremonies? Get your trivia fix. [Valegro Shines In Grand Prix, Germany’s Out From And U.S. Team Holds Bronze Position]

Carl Hester is basically all of us who accept our horse’s spookiness with good grace. Hester’s mount Nip Tuck was unfortunately spooky in the early part of his test, but the pair managed a 75.529% regardless. “One minute it’s a camera, one minute it’s a flower; he’s got a tiny mind.” Tell it like it is, Carl. He also publicly stated that’s he pretty sure the horse saw a Pokemon at A. [Carl Hester says Nip Tuck ‘needs glasses’ after spooky test at Rio Olympics]

If you’re not familiar with USA’s Laura Graves’ story, learn how this cosmetologist became an Olympian. It turns out that unique background provides her with many gifts that have helped her get to the international stage, in more than just doing an amazing clip job. Graves purchased Verdades or “Diddy” as a six-month-old, making their partnership truly lifelong. She now anchors Team USA in fifth place individually. [How Beauty School Helped This Woman Become an Olympian]

What happens when you ride for Australia and your spouse rides for Sweden at the Olympics? Well, you don’t get housing together, for one — Lyndal Oatley, riding for Australia, and her husband Patrik Kittel for Sweden have been meeting up for “dates” since they’re housed at opposite ends of the Athletes Village. This is the saddest yet most adorable story to perhaps come out of the Olympics so far. [Tales from Rio: ‘We walk tp McDonalds for date night in the Athletes’ Village]

We’ll have plenty more headlines and news stories like these each day of equestrian competition at the Olympics — keep it locked on Horse Nation!