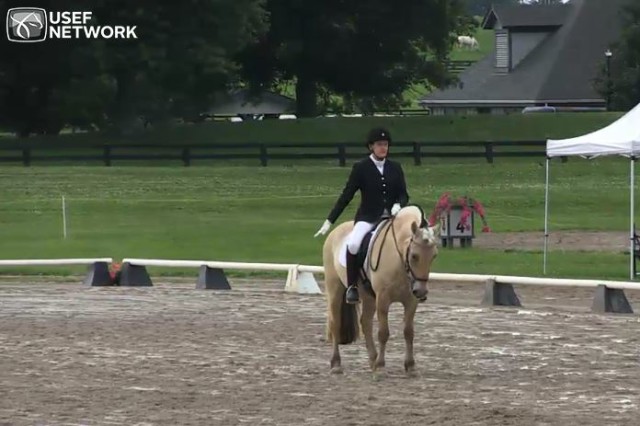 Nothing gets you to the end of your work week like ponies being adorable in the sandbox, and the USEF Network has got you covered with complete coverage of the National Pony Dressage Cup at the Kentucky Horse Park!

The National Pony Dressage Cup is streaming today, Saturday and Sunday from the Kentucky Horse Park, courtesy of the USEF Network, and we can’t think of a better way to waste away your time on the internets. I’ve got a handful of reasons you absolutely need to at least take a peek, even if dressage isn’t your bag:

There is a multiplicity of breeds

Renowned and also slightly terrifying FEI Judge Axel Steiner is providing the commentary for USEF Network, and he’s not holding back! He has a bit of a reputation in the dressage world for having high standards and few compliments, which is a rather hilarious combination when commenting on children and adult amateurs riding ponies:

“I thought we had the letters in the wrong place, but it’s just the rider.”

“I have a feeling that will be a lot of sixes.”

“This has absolutely nothing to do with a medium walk.”

That being said, it’s very educational, and incredibly entertaining! And truly, he’s been very complimentary to how wonderful the pony dressage world is, and how nice it is to see such diversity in the sport, which you have to appreciate.

Dressage Ponies are Naughty, Too

Even expensive dressage ponies are still ponies, so it’s always a bit of living on a wing and a prayer. Add to this that the show is outdoors and there have been lighting and thunderstorms intermittently passing overhead and mud underfoot, and you’re bound to see a pony put its teacup foot down. I’m not saying I wish a poor performance on anyone, but if we happen to see a bit of pony ‘tude on the occasional halt/salute, the world will not end.

People who ride ponies are adorable

Take our own champion head editor, Leslie Wylie, who recently acquired her own eventing pony that perfectly matches her dainty 5’2″ frame. Whether young or old, the people who ride ponies almost always have a personality to match – feisty, brave, and living with a lust for life and adventure.

The Interviews Are the Best

Pony Dressage is a whole other universe from regular dressage. When Mr. Steiner went out to interview someone coming off a test, I was bracing myself for the usual spiel “My trainer found this pony for me in Germany, and he descends from carefully bred multimillion dollar dressage ponies, blah blah blah.” But not at Pony Dressage.

Take this wonderful interview with Ginger Gilmore-Childress: Her mount Killian’s Red is the oldest horse at the show at 22 years old, and he came to her six years ago en route to a feed lot after failing out of the pony hunters.

Ginger is an amateur with a demanding job, and Killian is her only horse. The two have gone as high as fourth level together, and Ginger says she loves his spice and attitude even at 22.

“I think (ponies) have a lot of heart and a lot of spice. It’s always one day at a time with this one because of his age and he’s got cushings and other things that we keep an eye on with the vet, but we’ll keep going and having fun until he tells me he’s ready to stop.”

It’s clear that her love for him is entirely ferocious, and that he has permanently converted her to the world of ponies. “These giant 17-hand horses women ride? Been there, done that. This is so enjoyable. I never had a pony as a child, so this is a lot of fun for me.  He keeps me happy, so in return, I do the same.” Umm, all the feelings, Ginger. All the feelings.

Last but Not Least, There are Pony Musical Freestyles

We’ve got all the links you’ll need listed below, but keep in mind that rain delays have offset the ride times quite a bit for Friday.