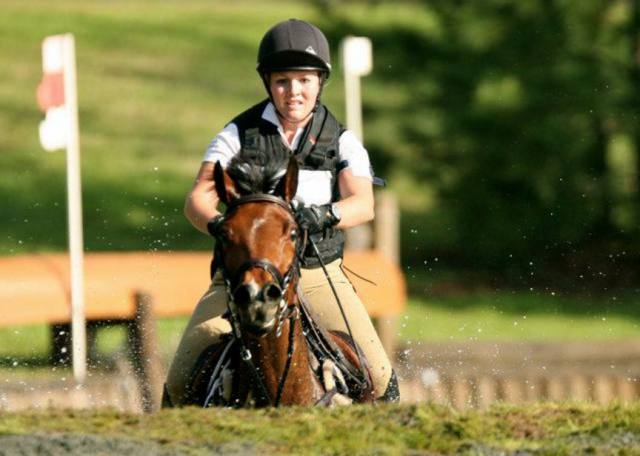 All Leslie Wylie’s ever wanted in her life was a pony. Now that she’s a full-grown adult with plenty of adult responsibilities, she decided the time was ripe. Introducing a new column: The Princess Diaries.

Some people who are going through a midlife crisis splurge on a sportscar, take up skydiving or have an affair with the mailman.

Since I am a 10-year-old horse crazy girl trapped in a 34-year-old body, I bought myself a pony.

The decision was a departure from my usual Napoleon Complex MO. As someone who sticks 5’2″ on a big-hair day, I’ve always gravitated toward oversized objects: my husband is 6’4″, I drive an F250, and I get a sick thrill out of jumping things that could swallow me and my horse whole.

In over my head, literally, at Southern Pines. Photo courtesy of Leslie Wylie.

My taste in horses has always run toward the Jurassic Park end of the spectrum, too. Need a hand getting the buck out of your 17.3-hand draft/T. Rex cross? I’m available! And no I don’t need a leg up, thank you.

But just below the surface of all that overcompensating let’s-wrestle-a-bear machismo, all I’ve ever really wanted — and it’s only taken me two decades and a few trips to the emergency room to admit this — is something a little more fun-sized. Specifically, a pony.

Unfortunately, it IS a lot to ask.

At present I pay board on two very fat, very happy pasture ornaments, Mishka and Esprit. Don’t get me wrong: I love them and am honored to flush checkbook after checkbook down the commode to give them the condo-in-sunny-Florida retirement they deserve. But with two horses already grazing down my income (lest we forget, I write about horses for the Internet for a living), buying a third — even a little bitty third — would be insane, right?

Fortunately, no one has ever accused me of being sane.

I talked to Ridgemor Farm’s wonderful managers, Tracie and Tally, who agreed to let me work off some of my board…

…and the search was on.

It literally took me about 30 seconds of perusing EN’s sister site Sport Horse Nation to find my dream pony: a 14.1-hand, 13-year-old Welsh cross named — wait for it — “Princess.” The next thing I knew I was in my truck, on the road to Lexington, Kentucky, for a test drive.

Princess’ lady-in-waiting Lexy Funk was clearly torn up about her decision to part ways with her beloved pony BFF. For six years the pair has been inseparable as they bounced their way from Novice to Training and then on up to Prelim, even competing at a CCI1* event.

Did I mention the pony has mad hops?

But as a recent college grad Lexy is now embarking on that annoying “adulting” phase of life — and Princess’ jet-set lifestyle is no joke. It’s hard, but sometimes loving a pony means letting them go.

I get it, Lexy. I know a once-in-a-lifetime pony when I see one.

Lexy’s trainer Elissa Gibbs hopped on Princess first, her normal-length legs dangling a bit low. Princess hadn’t been ridden in a few days and was eager to get on with it, pausing occasionally to kick out dramatically at her wet tail. She had the look in her eye of a four-star horse in the cross country warmup, ready to attack whatever popped up in front of her.

Which, to her disappointment, on this particular day turned out to be just a small hunter-y course, since Elissa might have pulled a rail with her own toes and I hadn’t really jumped anything (save a few 5′ foot hedges out hunting with the Ledbury) in the couple years since Esprit retired.

She was quick-on-her-feet, wicked keen and more than a little bossy, but every time she tugged the reins through my fingers I couldn’t help but grin. I have a thing for hot-sauce fueled rocket ships, mares in particular, as in my experience they’ll jump the moon for you — IF you can get them on your side. Princess struck me as the type that would either jump her heart out or, if you got in her way, take out every damn rail on the course.

But hey, I respect that mentality.

For the rest of the week my grown-up, sensible self wrestled with my inner little girl who’d watched one too many horse movies. Wouldn’t it be nice to own a nice, chill, not-fire-breathing equine for once in my life? Maybe we were too much alike. If you stack two Napoleon Complexes on top of one another, does the whole world explode?

Lexy and Princess: that bank is as big as you are, little pony! Photo courtesy of David Mullinix Photography.

I tried to talk myself out of her…

…and looked around at a few other very reasonable event prospects on either side of the 14.2-hand mark, but I just couldn’t get Princess out of my head.

Finally, I sent them an offer accompanied by the following emoji…

…and held my breath.