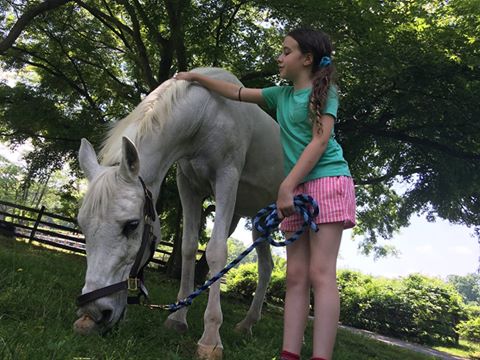 Lily the “paintball horse” became an icon for equine rescue this spring when she was found dumped at the New Holland sale of Pennsylvania covered in what appeared to be paintball shots. The aged mare was underweight and nearly blind; she was sore to the touch and had been abandoned at the sale barn with no paperwork. She required extensive treatment and rehabilitation, including the removal of her right eye.

However, her story had a happy ending: once she was healthy enough for adoption, Lily went to live out her days at Jon and Tracey Stewart’s Farm Sanctuary in New Jersey, a home for rescued animals of all species. While aged, she was expected to have several more years to enjoy green grass and wide pastures, relishing the love and tender care that she had so deserved.

Unfortunately, Lily’s days in sanctuary were shorter than anyone could have predicted: The Daily Squeal, the Facebook page following the Stewarts’ sanctuary, announced on Monday evening that Lily had passed.

Lily loved her time in the paddock munching on grass. During the day Lily got massages, baths and lots and lots of hugs. She slept soundly in her barn listening to soft music. Her favorite Pandora channel was Ray Lamontagne. Her bones were very frail. She stumbled and fell hard on her neck causing a break. When we knew there was nothing more we could do for her we covered her in kisses and kind words and said our good-byes. Our hearts are aching we had so many more fun plans for her. She was beyond special and beyond loved. We are comforted knowing that we were able to give her peace. She left this world feeling love. The hardest part of adopting animals that have suffered neglect is that you often don’t get to spend as much time as your heart would have liked.

We send our condolences to Jon and Tracey Stewart and all who had come to love and cherish Lily at the farm sanctuary.

Losing a horse at any age is difficult, no matter if you’ve known them for years or just a few weeks. While Lily’s time with the Stewarts may have been short, we’re happy to know she enjoyed the best care and environment a horse could ask for, and most importantly, that she knew love at the end of her days.

Adopting a horse for sanctuary or hospice is no less rewarding than adopting a rescue for a riding or show companion, and just as critical in a world in which animals of all ages and conditions need safe, loving homes. According to the suspected former owner of Lily, she had sent the mare with a shipper under the impression that he would arrange for euthanasia; instead, the mare wound up in poor condition and abandoned at a sale. While the decision to euthanize a horse is never easy, it’s a responsibility that we take on as horse owners and caregivers, and we owe it to our horses to make the best decisions for their health and well-being, especially in their twilight years.

Rest in peace, Lily. May your journey inspire all of us to care for the horses, every step of the way.