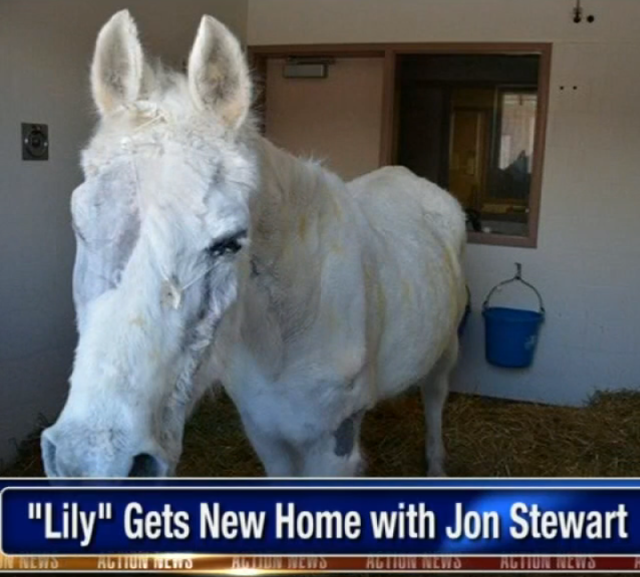 The aged mare was found dumped at New Holland sale, ill and injured.

A little gray mare made headlines on March 14, 2016 when she was discovered abandoned in a pen after the usual sale hours at the New Holland sale in Pennsylvania. The aged mare was underweight, uncomfortable to the touch and had apparently been shot with over 100 paintballs at close range; her coat was still stained with paint. She was unregistered for that day’s sale and was instead dumped in the pen with no identification or paperwork.

The Lancaster County SPCA was called in to rescue the mare, since dubbed “Lily,” and sent her to Penn Vet’s New Bolton Center for treatment. Another rescue, Omega Horse Rescue and Rehabilitation Center, was granted ownership of the horse to eventually adopt her out. While at New Bolton, Lily’s blind right eye was removed, her left eye was treated for an ulcer to restore about 80% of her vision on the side and her teeth received extensive dental work (these conditions were unrelated to the paintball attack). She continued to heal from the discomfort thanks to the paintball attack.

Lily was then moved to a private rehabilitation center next door to New Bolton. Since her rescue and treatment, Lily has gained about 150 pounds. She is estimated to be between 20 and 25 years old.

This video from WFMZ-TV details some of the legal issues of the case:

Lily finally received the fairytale ending she deserved when it was announced on Saturday, May 21 that none other than comedian Jon Stewart and his wife Tracey had adopted Lily to live out her days on their farm in New Jersey, where they had partnered with Farm Sanctuary in 2015. Lily will be adopted with her rehab buddy and pasture mate Miss Anita, who also needed to have one of her eyes removed.

Learn more about Lily’s adoption in this video from 6 ABC:

On March 30, 2016, Phillip S. Price of Rhode Island was charged with five citations including three counts of animal cruelty for dumping Lily at the sale despite her obvious need for medical attention. He was convicted on Friday, May 20 and made to pay a  fine of $3,056 as well as an additional $10,178 in restitution to cover Lily’s medical bills at New Bolton. However, it’s still unclear from a legal standpoint who was responsible for the paintball attack on Lily.

Lancaster County SPCA reported that they believed they had tracked down the farm where Lily had come from before ending up at New Holland. The farm owner, Doreen Weston, claims that Lily does not match the description of the old lesson pony she had asked Price to pick up, though she does admit that the lesson pony in question did have dental and vision problems, was aged and had recently been finger-painted by children at a birthday party. Why the alleged paint was not washed off and why Weston had an aged and impaired lesson pony removed for New Holland is unclear.

Regardless of who is ultimately responsible for Lily’s abhorrent condition when she wound up at New Holland in mid-March, it’s clear that she has finally found the perfect final home where she can live out her days free from pain or fear. Our hats are off to the Lancaster County SPCA, Omega Horse Rescue, New Bolton Center and the Stewarts and Farm Sanctuary for their combined good efforts to give Lily the life she so deserves.

[Abandoned horse at Pa. stable was shot with over 100 paintballs, authorities say]

[Woman linked to Lily: ‘We’ve done that for years, put paint on the horse’]