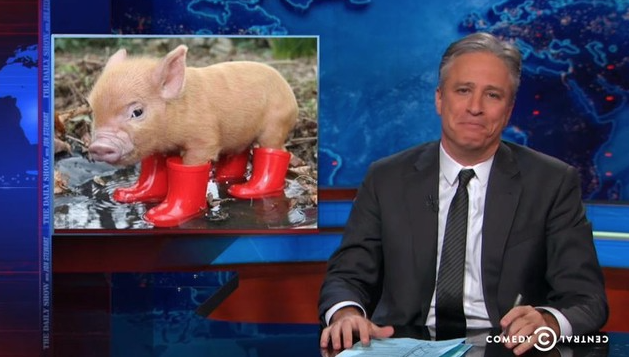 The Daily Show’s Jon Stewart announced that with his retirement from TV, he’s headed to greener pastures.

The Stewart family has always loved animals. “Promises of animal shelter visits in exchange for completed homework are the norm in the Stewart household,” said Tracy, Jon’s Wife and former veterinary technician, in a press release. So it’s no surprise that the family is moving to the country.

Stewart is known as an animal-rights advocate, with his opinions creeping into Daily Show segments such as his criticism of Chris Christie’s support of gestational pig crates or the recent interview with Farm Sanctuary co-founder and president Gene Baur.

And now the couple have purchased a farm in New Jersey with the intention of providing a home for rescued farm animals.

Artisan Books announced Thursday that it will publish Tracey Stewart’s first book, Do Unto Animals, in October. The book’s 300 color illustrations are by artist Lisel Ashlock. A portion of the proceeds from the book will be donated to Farm Sanctuary.