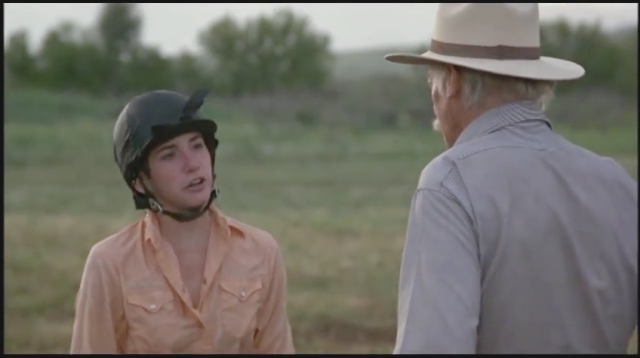 You still have time to qualify for Rolex … if you’re a character in this movie. This week we’re watching Sylvester.

The movie opens in a rough and tumble Texas stockyard. Charlie, our protagonist, is leaving work for the day when she hears a fate-laden whinny belonging to a Thoroughbred/Irish Sport Horse amongst the gangly mob of unbroken mustangs and cow horses. She promptly names him Sylvester Stallone.

The “breaking” of Sylvester is left in the hands of Red, a cruel — and sexist — cowboy at the stockyard. Later on, Charlie and Matt, who you might know as Al Carver in Wild Hearts Can’t Be Broken, check on Sylvester. Red left Sylvester beaten, bloodied, exhausted and without water.

Charlie gives Sylvester a bucket of water earning his trust and rides him the very next day, racing him against a train and then working cattle. The nefarious Red isn’t happy about being one-upped by a girl. He whacks Sylvester with a gate, which causes Charlie to lawn dart while Sylvester jumps a massive fence and runs away!

Aboard a super cute leopard Appaloosa, Charlie performs a horse to horse leap, stops Sylvester and saves the day.

If only all our protagonist’s problems were solved by pure bravery. A CPS official warns Charlie her younger brothers are at risk of being removed and placed at a boys camp. Charlie has to get a “real” job if she has any hope of keeping her family together.

Undeterred, Charlie plans to train Sylvester and make bookoos of money. Inspired by an ad in a magazine, encouraged by two cowboys who can barely speak English, funded by the Annual Police Charity and armed with an “Olympic Training Conditioning Schedule” in an old Practical Horseman, Charlie shoots for a Preliminary horse trial in Kentucky.

After getting help from her boss, Mr. Foster, and earning the support of boyfriend Matt, Charlie and Sylvester head to the Kentucky Horse Park, finishing dressage on a respectable 51.

They incur two time penalties in the steeplechase phase, but go clear cross country! Her total score of 53 moves Charlie and Sylvester in to 4th place!

The performance catches the eye of Mrs. Whitney Hyde, who offers to buy Sylvester and hire Charlie as a working student, but the deal would require one year of serious training with no distractions. No Texas, no boyfriend and no little brothers tagging along.

Charlie has a lot of decisions to make, not to mention the show jumping phase still left to ride. You’ll just have to watch and see what happens!

This movie is one of my personal favorites. You just can’t beat watching The Grey Goose herd cattle one minute and then blaze over a cross-country course the next. This film is also the quintessential “horse girl” movie: underdog heroine, mystical horse connection, drunk codger for a trainer, hunky love interest and impossible odds.

It’s only fault is the use of obscene language. Though there are some headier themes like rape, alcoholism and parental abandonment, I felt this movie was still meant for a younger target audience. I would have liked for the filmmakers to keep the language PG-13 rated or lower.

I give Sylvester 3 ½ out of 4 Golden Horseshoes.

You can purchase this movie on Amazon.