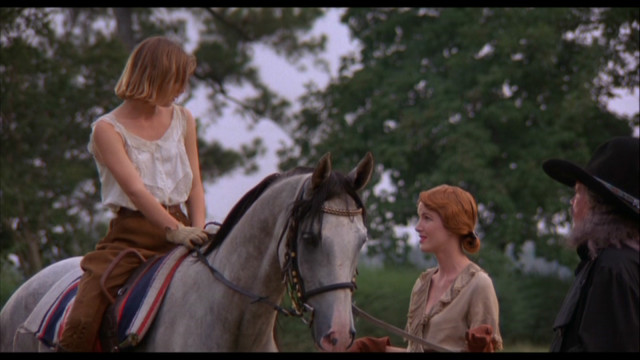 This film is based on the Alois Podhajsky’s autobiographical novel, “The Dancing White Horses of Vienna” and tells the true story of the Lipizzaner stallions of the Spanish Riding School during WWII. The sets are gorgeous, because it was mostly filmed at the actual Spanish Riding School in Vienna, Austria. The story, though slow in some parts due to the theatrical monologues typical of an older film, is very good. The riding is also accurate, despite Disney changing small details like opting for flashy red jackets instead of the historically correct brown. Most of the routines were performed by members of the Spanish Riding School and choreographed by Colonel Alois Podhajsky.

As far as I can tell, Miracle of the White Stallions can only be purchased via DVD.

Based on the memoirs of Sonora Webster, A Girl and Five Brave Horses, this film is set in Atlantic City during the Depression. The story follows a horse-loving runaway that gets a job in the girl-and-horse high diving act of Doc Carver’s traveling stunt show.

Despite knowing the cruelty these horses — and diving girls — endured in real life I still love everything about this movie. From the feisty female protagonist to the hunky love interest to the untamable horse to the unbeatable odds, it is absolutely horse movie perfection.

The following Youtube link leads to Disney On Demand, where the full movie is available for purchase.

Now, you might have noticed this list started out with a “very true” story that utilized actual riders and historical locations and has slowly devolved into “inspired by true events” territory. My final pick, Hidalgo, might not be true at all according to some historians. All we really know is there was a real man named Frank T. Hopkins who was an enthusiast of horses and telling tall tales. Despite the controversy, the film is definitely an iconic, beautifully acted, well written story worth watching. Also … Viggo Mortensen.

Hidalgo is available on Amazon Instant to purchase or rent.