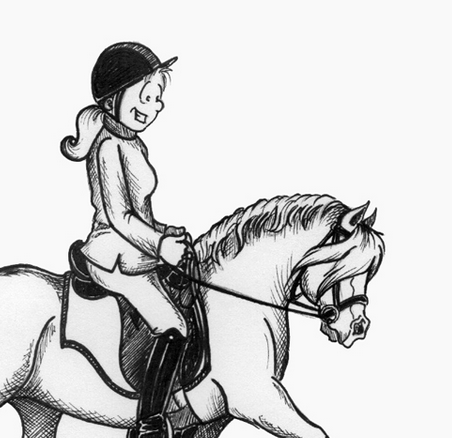 You never really outgrow them.

Ponies are cunning, sneaky, rotten little things whose irresistible charm somehow still manages to endear them to us. This is true whether you’re twelve or thirty-two. This week’s comic is inspired by Jack Jack, the maybe 14-hand New Forest pony that managed to hitch a ride home with my on my trailer from the show last weekend. Oops.

I’m blaming it on the fact that I never got to have my own pony as a kid. He’s ostensibly for me to bring along in dressage for some of my younger students, or eventual sale. That’s what I told The Husband anyway. You can see pictures of him below this week’s comic if you’re curious about the tiniest beastlet who has wormed his way into my life (I’m ignoring the fact that I’m sadly not really a pony-sized rider at 5’7″).

Jack Jack and I on his first day. He’s such a blast to ride and absurdly smart. And never fear, he will eventually be getting a more appropriately sized rider.

This is wee Jack Jack. He still has his winter woolies but is still undeniably adorable (ok, perhaps I’m biased).