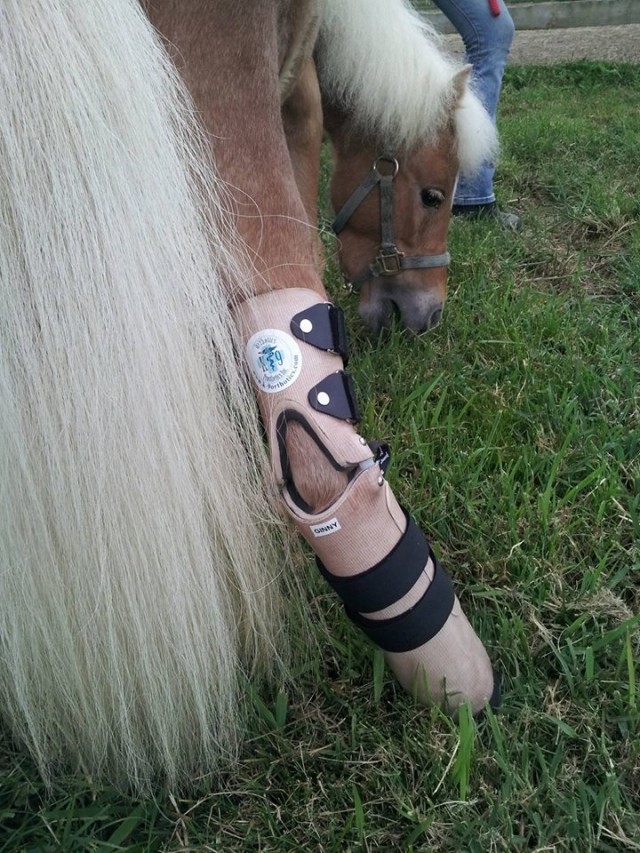 Remember the mini we featured who needed a prosthetic leg? Look at her now!

In June, we featured a horse-loving mother and daughter who were working hard to help a miniature horse they had recently adopted … who only has three hooves. Though she came with a prosthetic foot, Ginny had long-outgrown the piece and had been walking for about a year only fully on three legs, unbeknownst to her new owners. Tracy and Sarah Bailey have been campaigning through crowdfunding sites to raise money for a new prosthetic leg, and after a long summer of waiting patiently, have finally outfitted Ginny with a new and well-fitting prosthetic:

Today was a day I will never forget..The length of time we waited for this leg was a long wait but to see Ginny run out…

Posted by Ginny The Lionheart on Tuesday, August 25, 2015

Tracy Bailey states: “Ginny is doing wonderful with her new leg! She also now has gained a new best friend mini named Alley. We are so pleased by the amount of supporters who helped make this day possible. We now have to go through therapy, massage and possibly some chiropractic to help realign things. This remains a cost still. The price is nothing compared to seeing Ginny with her leg once again walking like a normal pony.

“Ginny is adapting as well as expected. I think she is nervous to put it on as she tries to run from us, but once it’s on she moves around freely as any other. Her muscles shake when it’s on as she needs to build her back end. She stands for her massages but she’s not to keen on the exercises she has to do to build muscle — I imagine it’s painful. We do notice when her leg is on that she motors around a lot more freely.

“I would love to thank Zoe Carter from Free Rein , without her none of this would have transpired. Also, Jeff from K-9 Orthotics and Prosthetics for making the leg with the assistance of Jan Huntington from Essex Animal Clinic, Wendy and the team from Willow Branch Ranch and Equestrian Centre for taking care of Ginny’s needs and their kind generosity.

“Foremost I would like to send a huge thank-you to my daughter Sarah for taking in Ginny and starting Ginny’s campaign. Without Sarah we don’t know where Ginny would have ended up. She believed that Ginny had the soul to love and live and proved that to all who follow Ginny the Lionheart.”

We again salute Tracy and Sarah Bailey for their efforts to improve Ginny’s quality of life. If you would like to make a contribution to Ginny’s continued care, please see the crowdfunding site. The Baileys remain grateful for any contribution, however small!