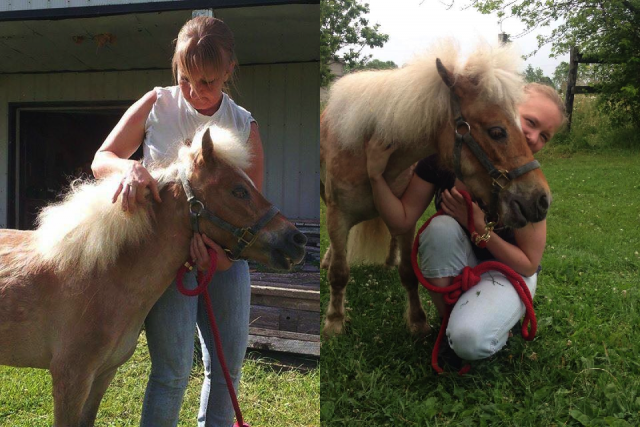 Each Friday, Horse Nation teams up with Ovation Riding to spotlight an individual or organization that is doing good work in the horse world. This week, we salute Tracy and Sarah Bailey of Windsor, Ontario.

Tracy and Sarah Bailey with Ginny

Tracy and Sarah Bailey had a soft spot already for the four-year-old miniature mare they saw advertised online, free to a good home. There was, of course, the curious matter of the mini’s missing hoof: her right hind hoof had been amputated after being caught in wire fencing. However, the pony would be rehomed with her prosthetic hoof, so the Baileys eagerly awaited the arrival of their new addition.

Unfortunately, neither Tracy nor Sarah realized when they agreed to rehome “Ginger,” now known as Ginny, that she had grown since her prosthetic had been made for her. It no longer fit, and Ginny had actually been living without it for over a year, hobbling along as best she could on three good feet. As a result, her hips and back are twisted and her other hind leg appears crooked, doing more than its fair share of the work.

Ginny’s tucked-under tail reveals how her hips and pelvis have rotated.

But this news, if anything, only made Tracy and Sarah Bailey more determined to give Ginny the good life she deserves: she is described as happy and curious, bright-eyed and affectionate despite the hardships she’s had to suffer.

Ginny traveled from her old home to Peterborough, Ontario to meet her new mini-horse companion Willow at Freehold Equine. Both ponies then traveled seven more hours to Windsor, where the Baileys are boarding. Since her arrival earlier this month, Ginny has received a “spa makeover,” farrier attention to her neglected feet with careful attention to the crooked hind and has been started on Riva’s Remedies for a bone supplement to help strengthen her hardworking limbs. Most importantly, the first steps have been taken to get Ginny a new, custom-fitted prosthetic that will allow her to use the right hind leg.

Once Ginny is outfitted with a new prosthetic, to be built by K-9 Orthotics & Prosthetics, she will need physical therapy to strengthen and straighten her body. In photographs and video, it’s easy to see how twisted her body has grown to try to compensate for the lack of use in her right hind. However, despite her obvious physical hardships, Ginny remains happy and loving with her new owners.

A GoFundMe page has been set up to help fundraise for Ginny’s new prosthetic, continued veterinary treatment and physical therapy costs. Tracy and Sarah are asking for help because they did not know how severe Ginny’s condition had become at the time they offered her a home and did not anticipate the costs of continued veterinary treatment or the creation of a new prosthetic.

We salute Tracy and Sarah Bailey for their good hearts and ceaseless devotion to Ginny. We encourage readers to follow Ginny’s story on Facebook.