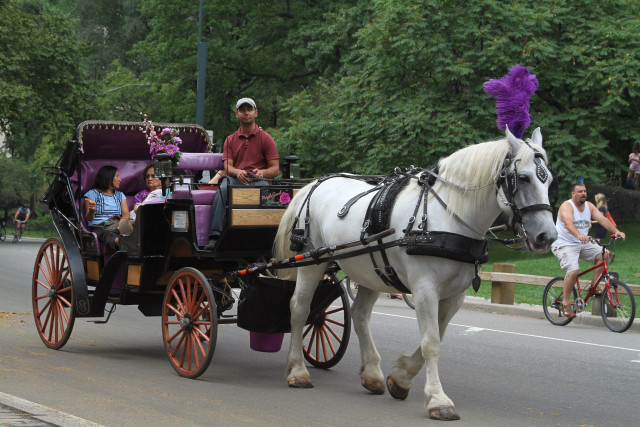 Ever since taking office as New York City’s mayor in January of 2014, Bill de Blasio has made it very clear that the horse-drawn carriage industry’s days were numbered. The debate over whether or not horses and carriages should remain in the city has raged for years, further fueled by various celebrities throwing their star power into the ring to sway the public (Miley Cyrus, Lea Michele and Georgina Bloomberg, among others, support a ban, while Liam Neeson, among others, has been a very vocal supporter of the industry.)

Arguments in support of a ban include the fact that NYC’s streets are a dangerous, noisy mess of nonstop traffic and exhaust fumes where no horse belongs, the horses don’t receive any turnout when stabled within the city, and that the horses work long hours in conditions that are inherently cruel. Those opposed to the ban argue that the horses are well-trained to handle city conditions such as traffic, air pollution should be a problem for all NYC residents and not just the horses, that each horse gets a minimum of five weeks turned out at a farm in Pennsylvania (and may receive more time if necessary) and that horses are well-treated and protected by rules and regulations to keep them happy and healthy.

Despite de Blasio’s political promise to ban the carriage horse industry, he’s been unsuccessful. I have to give the guy credit — rather than many so-called stance-takers who feel very strongly about an issue but don’t have any solutions for actually solving the problem, he actually came up with an alternative, the oft-mocked “vintage-inspired” electric cars. Unfortunately, no matter what de Blasio came up with, the important votes — those in City Council — just weren’t in support of the ban.

Finally, in August of this year, de Blasio admitted in a radio interview that the anti-carriage activist groups should talk to councilmen, because the mayor had done everything he thought he could. Since these activist groups, most notably NYCLASS, gave de Blasio an abundance of monetary support for his campaign and invested money in attack ads for de Blasio’s main opponent (a carriage supporter), they were pretty unhappy to hear this announcement.

Popular rumors trace the money trail from the activist groups to supposed real estate parties who are interested in purchasing the four properties that currently serve as stables for the city’s carriage horses. I could not find definitive proof of this connection, but it would help explain why the relatively small carriage horse industry became a major talking point of de Blasio’s campaign and mayoral term.

However, it’s not quite a done deal that the NYC carriages will live to serve another day — while support for de Blasio’s ban is lukewarm, the wealthy supporters of NYCLASS will continue to fight relentlessly to try to bring the City Council to support the bill. Truthfully, there have been incidents of escaped carriage horses galloping through the city, occasional horse or carriage crashes, and most recently, a collision between a teenager on a bicycle and a horse-drawn carriage. While those of us well-versed in the horse industry might shrug and see these as typical side-effects of being around horses horses (let’s be honest, who hasn’t experienced a bolting horse or been stepped on at some point?) the hard truth is that the majority of people who interact with the horses, other than the drivers and caretakers, don’t have any other experience to go on.

In certain respects, perhaps the horse-drawn carriages are a high-profile representation of the debate between animal rights extremists and traditionalists who like to see horses remain in the city. Both sides claim their support in the name of love for the horses — so who is “right”?

Meanwhile, the horse-drawn carriages will keep on doing what they’ve done for decades: get back to work.

Whether or not the horse-drawn carriages truly have a place within the ever-changing landscape of the city remains to be seen. As de Blasio has stated, it truly may be only a matter of time before they’re gone for ever.