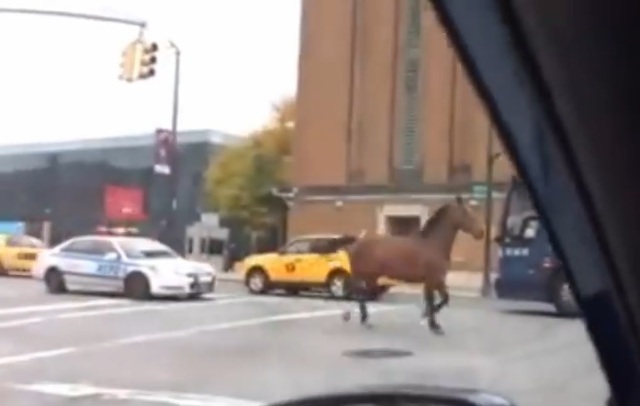 ‘Sir, Do You Know How Fast You Were Trotting?”

Police pulled over a carriage horse who escaped from its handler and went for a jaunt through Hell’s Kitchen on Sunday morning.

According to the New York Post, the runaway horse, named Bernie, broke free from owner Declan Quinn during a bath when his halter broke. “He’s never done this before,” Quinn told the Post. Bernie is a resident of Central Park Carriages, a stable on West 38th Street.

It was 8:30 in the morning on Sunday so thankfully traffic was relatively light. Police steered him into an empty lot on 11th Avenue, where his urban adventure came to an end. The horse was uninjured and went back to work on Monday.

The video was released by NYCLASS, an activist group that opposes the use of carriage horses in New York City. Allie Feldman, Executive Director of NYCLASS, issued this statement in response to yesterday’s incident: “This is the latest example of why horse drawn carriages are not just inhumane but entirely unsafe in a city congested with cars, trucks and buses. It’s time for the City Council to act and get the carriage horses off the streets of New York City.”