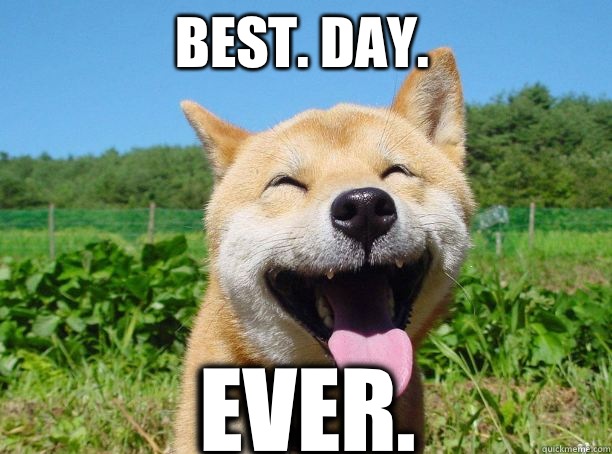 I was recently asked about the “best day of my life” on Facebook. It was a question spurred by this article making the social media rounds. Most of the commenters appeared locked in a bitter battle between their wedding day and the day their child was born. Then I came along and exploded the internet with this.

First off, I should say that I adore my better half and our sum total.

Their true identities must remain anonymous, because #crimefighters.

But, lemme be honest … My wedding day included stress, tight schedules and public speaking. The day my daughter was born included a massive hospital bill, strange hands near my nether regions and a 5-inch needle inserted in my spine to reduce the pain of shooting something the size of a watermelon through a hole the size of a lemon.*

*I’m not a doctor. Those dimensions are probably invalid.

Plus, let us not forget that both those days my horse. wasn’t. there. And that’s the real factor, isn’t it? As equestrians we are a bit passionate about our horses. Horse riding is who we are, how we live, what we do.

The best day of my life was in 1999 when I placed 9th out of almost 300 competitors at the Texas State 4-H Horse Show.

It was basically the culmination of my entire life up to that point. I became a member of 4-H when I was 8-years-old, the minimum age allowed, and had been a stalwart member of the Ward County Horse Club from Day 1. To add to that, I worked my butt off the summer of 1999, training under, not one, but two trainers for just one event: Trail. For those of you who don’t know, Trail is a judged event testing the maneuverability of the horse through an obstacle course. The horse and rider are judged on both accuracy and style.

I remember everything in vivid detail. The tension of the preliminary classes and the stomach churning ordeal of the Semi Finals.  Then I was listed as a Finalist, with only 14 other competitors. The warm-up ring that day was one of those moments in your life where, literally, everyone looks more awesome than you. In particular, I remember one amazing red roan gelding.  He was a big Quarter Horse – over 16hh – with a tail that dragged the ground and the most beautiful, cadenced lope I’d ever seen. On top of that, his rider looked like someone out of a Victoria’s Secret catalog.

Some people might have been disappointed by a 9th place finish, but for me it was akin to being the first man walking on the moon. I was riding a horse I brought up the levels from a 2-year-old and nothing could have been better than pulling him out of that lineup and being handed my grey rosette.**

**Don’t mind the purple rosette.  It’s for 7th place in Halter, which I barely count as an “event,” because I’m a riding snob.

So, there you go, that’s the best day of my life. The first time I galloped over cross-country fences probably comes in second and my husband did finish out the podium, with all six days of my Alaskan honeymoon tying for third…

What’s the best day of your life? Give me a shout in the comments!