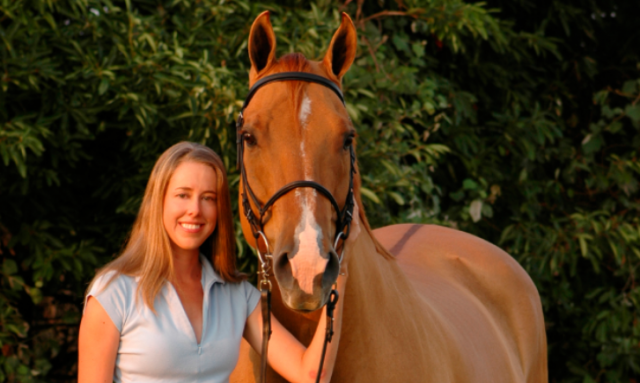 HN writer Amanda Uechi Ronan is celebrating a 20-year anniversary … with her horse. Here’s their story.

A soul mate is generally defined as ” a person with whom one has a feeling of deep or natural affinity.” The term was coined by Samuel Taylor Coleridge in 1822 and generally implies a romantic partner, but anyone with a best friend, beloved sibling, or perhaps even a favorite pet might dispute that definition. I know I would.

I met Aggie in March of 1995 when I was 11 years old. He was listed for sale with a trainer named Charles Nunn in Odessa, Texas. It’s funny because I can remember almost every detail about the day. When we pulled into the driveway, Nunn was riding a little chestnut. The fingers of his left hand were wrapped lazily around the reins while his right was busy with a cigarette. Nunn nodded his head when we requested to see Aggie and as he put away the chestnut he said, “The little dun’s around back.”

Aggie was standing with his hind end facing the gate and his left side in the shade of a corrugated tin barn. His right hind hoof was resting on its toe while he napped. As soon as I peeked over the gate he looked over his right shoulder with ears perked and eyes wide. I’d like to be more pragmatic about the moment, but really it hit me like a ton of bricks. I remember saying to my mom, “That is my horse.”

Nunn gave us a quick rundown of stats and figures. Aggie was a two year old with 45 days training, so “probably too young for your girl.” He was bred for team roping “but grew too tall.” Finally, he was born at Texas A&M University as part of an In Vitro fertilization study and was raised by students for the last two years. We were given a quick demonstration of Aggie’s skills, including walking over a wooden bridge obstacle. Afterwards, I walked him around the pen while the adults discussed the price. Trying to play it cool, my mom insisted we not seal the deal that afternoon. There were rational things to think about like pre-purchase exams and “checking with dad.”

I lost my mind and that’s putting it lightly. I started crying and didn’t stop for hours. I insisted I would pay for the horse … or most of the horse … or as much as my tiny savings account would allow. So we returned to Nunn’s barn the same day and gave him a check. Aggie was mine. We loaded him up and brought him home, where we promptly realized he had no concept of backing out of a trailer. Several hours (and my dad disassembling the entire center partition of the trailer later) Aggie finally took his first step in my hometown of Monahans, Texas.

The truth of the matter was I had no idea what I was doing. I had a green broke two year old and no concept of how to train a horse. My parents immediately phoned D.C. Higgins, a trainer out of New Mexico, whom I had worked with at clinics. D.C. accepted Aggie into his program and we were on the road within a few weeks, headed past El Paso all the way to a little town called Chaparral, New Mexico.

Aggie stayed at D.C.’s barn for three months, at the end of which, I joined him for two weeks. We learned enough to fill a dozen books. For the next several years, we would return to D.C. every summer for a full two weeks of private instruction. How I ride today is still based on that foundation.

When we got home, we immediately started competing in 4-H and AQHA. Aggie gained a bit of a reputation for being antisocial. Many of the people I competed against over the years will surely remember his “dinosaur scream” whenever another horse dared come close. True story, he once almost kicked a judge who was walking behind him in the line up. The judge apologized. Aggie liked being the star and he knew when he placed first … everybody else in the ring was just a hassle to him.

Over the years, we competed in every event possible. There was Showmanship at Halter.

But above all else, we excelled at Trail class. The highlight of my time as a Youth has to be our ninth place finish out of almost 300 competitors at the 1999 Texas State 4-H Horse Show. That whole summer we trained with Susan Bruner of Odessa, Texas. Susan took a good team and made them a great one. She taught us finesse.

We continued the breakneck pace through 2000 and 2001, racking up plenty of swag.

High school graduation in 2001 was bittersweet. Aggie had an abscess that summer and I was unable to compete, but I also knew I was headed to Texas Tech in the fall. We would be separated for the first time.

Separation anxiety was an understatement, so soon I was bumming around Lubbock, Texas, looking for a working student position. I snagged one at a Western Pleasure barn just outside of town and though I’d like to tell you it was awesome … the truth was I learned a lot about washing tails and little else. Aggie and I not only decided it wasn’t the barn for us, but we left Lubbock completely. The three of us (did I mention we met my future husband?) hauled out of town, transferring to UT Tyler in east Texas.

There we bounced around boarding stables, some good, some bad, and some worse. Aggie sustained an injury to his sacroiliac joint (Hunter’s Bump) sliding in mud at one stable, sidelining us for almost a year. Finally, in 2005, we landed at Seahorse Sport Horses where head trainer Terri Adams introduced us to dressage and eventing. Aggie fared well at dressage and even racked up a few first place ribbons at the K9 Search and Rescue Benefit Shows held annually at Holly Hill Farm in Louisiana.

We continued competing in western disciplines through 2007, when we were crowned Champion All-Around Adult with the East Texas Horse Show Association. We ran undefeated in trail the entire year.

Unfortunately, Aggie was starting to show a little wear and tear. We injected his hocks and stifles, but the veterinarian insisted the old man needed to slow down. The competitive lifestyle was no longer for us. So, we decided to start fox hunting.

In the summer we do some trail riding at Lake Sam Rayburn … usually ponying OTTB eventing prospects.

And every now and then we compete in ACTHA trail rides.

We also love riding on Galveston beach. Bridleless, because why not?

Somewhere along the way, my husband and I added a new member to the family and Aggie had to start teaching lessons. He tolerates the activity, but only if copious amounts of carrots are received in payment. My daughter insists, “He’s just your horse,” when Aggie misbehaves. I don’t argue.

So here we are 20 years later. Aggie doesn’t tolerate the cold or heat like he used too and he can’t eat anything with excess sugar since he developed metabolic problems a few years ago. He grows too much hair during the winter and needs daily leg massages to help his arthritis, but he still rules the roost and that’s all he really cares about. He gets ear rubs and a handful of carrots every day.

Most of my best memories involve Aggie. I’ve spent more of my life with him than without. He’s my soul mate, my brother, my friend and my horse. Cheers to 20 years, Aggie. Here’s to as many more as we can get.