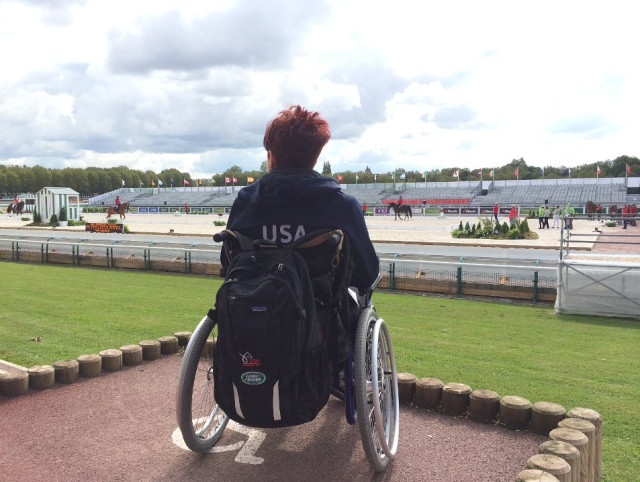 The 17-year-old Paralympian’s journey hasn’t been easy, but she’s determined to get to Rio.

This story was originally published in September of 2015.

You may remember Sydney and her service dog, Journey, as the winners of last year’s FEI Against All-Odds Award. Since last fall the pair have shown no signs of slowing down as Sydney continues towards her goal of representing the United States in the 2016 Paralympics in Rio. According to the FEI database, Sydney currently ranks 4th in the USA, but even with her solid standing she maintains that there’s much work to be done.

I caught up with Sydney after she returned from successfully competing in the NAJYRC in Kentucky. “I was honored to compete there! It was the first year they included para-dressage which was something Jonathan Wentz really worked hard to get done. It was really heartwarming how the dressage community really embraced us” said Sydney. Now back home and training Sydney and her service dog, Journey, continue with their work towards Rio.

At age seven Sydney was diagnosed with Wyburn–Mason Syndrome. Wyburn-Mason Syndrome is a rare, but very serious condition that affects less than 0.14 % of the population worldwide. As a result of this rare congenital birth defect and the attempts to treat it, Sydney is blind in her right eye and suffered a stroke that caused her to lose use of her left side. While such traumatic obstacles would cause many individuals to resign themselves to a state of sullen apathy, that is not the case with Sydney. Despite these difficulties she remains a cheerful, enthusiastic, and fiercely determined young lady; she completely embodies what it means to be resilient.

This past year, in addition to school, Sydney has been busy training and competing with her Hanoverian gelding, Wentworth. When asked what her favorite aspects of training and showing are, Sydney chuckled, stating “Everything! You’re always trying to perfect something. There’s always work to be done.” Apparently Sydney has been putting in the work as she and Wentworth have been quite successful this year. Some highlights to date include winning her FEI Para Individual Champion test with a score of 66.5% at the Global Dressage Festival in Wellington, winning her FEI Para Equestrian Test of Choice with a 75.8 at Dressage at Stockade, winning both the FEI North American Junior and Young Rider Championships team and individual tests with a 67%, and–most recently– winning her Para Equestrian Freestyle at Stockade with a 78%.

At present, Sydney trains with Wesley Dunham of Woodstock Stables in Millbrook, NY. “I’m extremely lucky to have such a great trainer, horse, and team [behind me]; every day is exciting!” Sydney notes. She especially credits Dunham with helping her ride better geometry in the ring and being able to “step into her shoes” to better figure out how to teach her with her visual impairments. “No one has the same visual impairment […] which is tricky. He’s been great stepping in to figure out what works best for me” said Sydney.

When asked specifically about any new challenges or breakthroughs she’s encountered this year, Sydney was quick to laugh, noting that she’s always learning, but having come from an eventing background, she’s had to work especially hard on her accuracy. “In eventing, you just get dressage out of the way so you can go jump. Obviously that’s not the case when you’re focusing on dressage. Wes has helped me immensely with this.”

Certainly representing the U.S. in the Paralympics in Rio is her next big competition goal, but Sydney has more altruistic goals in mind for the long term. While she loves to compete, and would be honored to represent the United States at the WEG and in the 2020 Olympics, competing isn’t her sole focus. Ultimately she plans on going to school to become a special education teacher because she loves working with kids with disabilities and hopes to inspire others to accomplish their goals, however large or small those may be. She would also like to further mentor other para-equestrians, much like Jonathan Wentz did for her, and perhaps even start her own therapeutic riding program. “It might seem overwhelming at first when you think of achieving your goals, but don’t let that discourage you! There will be bumps along the way but [you need to find a way to] spin those into positives,” Sydney said.

With her effervescent personality and fierce determination, Sydney is an impressive young lady and one to watch as her career continues to develop. To learn more about Sydney and her journey towards Rio, visit her webpage here.

Morgane Schmidt Gabriel is a 31-year-old teacher/artist/dressage trainer/show announcer/ who still hasn’t quite decided what she wants to be when she grows up. A native Floridian, she now lives in Reno, NV, where she’s been able to confirm her suspicion that snow is utterly worthless. Though she has run the gamut of equestrian disciplines, her favorite is dressage. She was recently able to complete her USDF bronze and silver medals and is currently working on her gold. Generally speaking her life is largely ruled by Woody, a 14.2 hand beastly quarter horse, Willie, a now beastly 5-year-old Dutch gelding, and Stormy, her friend’s nearly all white paint gelding with a penchant for finding every mud hole and pee spot in existence. Visit her website at www.theideaoforder.com.